Wheeler in the Sky

When you suddenly find something large turning like a wheel in the sky (OK, I admittedly had to stretch this a bit but this is a pretty good live version, so it was worth it), what do you do as a birder?
First, get your geographic bearings right and ask yourself where you are.
If it's Europe, consult the Forsman guide.
If you're in North America, grab your copy of the Wheeler guide.
If you're anywhere else, well, the thing might best be called a "seagull".

When I woke up this morning, I found myself once again in downtown Ann Arbor, which is Eastern North America. With no time for birding but an urge to put something useful on the blog, I therefore have descended like a pack of vultures onto a book review of the Wheeler guide, so Forsman just about got away through pure luck.

So here it is now, the book I am intending to discuss today. Raptors of Eastern North America by Brian K. Wheeler.

When I read a book review, there are basically two things I want to know or expect to learn:
A) What is the book about, what is its content and which aspects are being dealt with.
B) Is it good.

As before, this review might be a bit long and the description of the book's content a bit boring, but I feel that this information really should be part of a review. If you disagree, just scroll down to the judgemental section and skip the words about its content.
If not, here goes...

The book covers the 26 species of Raptors found east of the Mississippi. Raptors here is not meant as a description of a taxonomic union because the author is also incorporating the two species of New World Vultures, which does make sense despite its rendering the book polyphyletic. He actually addresses the apparent polyphyly of the North American raptor species in his introduction to the New World Vultures, so he cleared out of that corner quite all right.
And now we also know a cool word with many "Y"s for our next round of Scrabble which adds meaning to the otherwise quite useless last few sentences.

In his introductory chapters, Wheeler gives basic hints as on how to identify raptors (most importantly: enjoy), describes the format for the Species Accounts, explains the concept behind the plates and captions and provides a few words on the range maps.
What follows is one of the more important aspects of the book as it goes beyond raptors: he provides extensive glossaries on the anatomy of raptors (birds), a "flying and perching displays glossary" (did you know what a "pothook" is or have heard of the wail-pluck display?) and also on general aspects ranging from albinism to wing chord.
Very important when dealing with raptors is a preferably profound knowledge on their moult and ageing and here, too we can find very useful and simple-to-understand (good, because I still struggle with my comprehension of moult) information. What I also found quite good is his description of the different perching and flying attitudes which are accompanied by nice photos (I'll talk about those later). Sadly, he did not include the "I'm gonna poop or maybe just turn around" perching attitude, but it's OK, we all know that one anyway.

Now, finally, we get to the species accounts! considering the book has a total of roughly 450 pages for 26 species, you'll have guessed by now that the species accounts are extensive.
And they really are.
Wheeler provides information on the following aspects:
Ages, Molt/Moult, Subspecies (listing also those found outside the East), Colour Morphs, Species/Adult/Subadult/Juvenile Traits, Habitat, Habits, Feeding, Flight, Voice, Status and Distribution, Nesting, Conservation, Similar Species and Other Names, so there's quite a few chapters to scan through.
Most extensively covered are the Colour morphs, Traits, and the Status and Distribution sections as seems most appropriate for a book that's primarily aimed at being used as a guide to identification.
Each species account is accompanied by a very detailed map showing its distribution in the Eastern part of North America for each subspecies (on some maps, several subspecies are combined) and a series of photos showing the plumage of all the major age classes or subspecies/colour morphs for both perched birds and birds in flight.
The captions to each photo highlight the traits shown (be it species identification or certain age traits) and also mention the month in which the picture was taken, but - a bit sadly - not the location. The latter lapse is not all that important however as the author always mentions the subspecies depicted.
The number of photos per species (4 per page) varies according to the variation in the species plumage and ranges from 7 (Black Vulture) to an incredible 82 (Red-tailed Hawk). I don't think I have ever seen a book with so many pictures of a single species!
The book ends with an extensive bibliography (and an index, of course).

Man, this has been a long text. I think I'll just include a picture of a raptor here before moving on to the real review, the ruling on the book's quality. To continue on the vulture theme, here's another TV from May 2005, this one captured on film at Point Pelee. 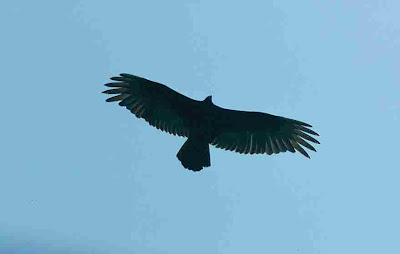 Is it good?
Yes, it is good. It is possibly amongst the best books on the identification of a group of birds, at least one of the best I've come across.
It is very important however to clearly have in mind the group of people this book was designed for! This guide certainly requires an identification background or at least a basic knowledge on raptor identification. If you're still trying to figure out how to tell a Swainson's Hawk from a Red-tail, this guide might be exceedingly frustrating. The photos, as I have mentioned, are not grouped together but are attached to each species' account, making comparisons between different species or a quick glance at the most important general field marks very time consuming, if not impossible. For the basic identification of raptors, another guide co-written by Wheeler might be much better suited. I haven't gotten myself a copy of this book yet but had a quick look at it at a book store, and it seems much more user-friendly on a general species-ID level than the Wheeler guide.
The Wheeler guide however appears indispensable when e.g. confronted with identification problems like the separation of Krider's and light-morph Ferruginous Hawks or the subspecific identification of raptors (yes, yes, yes!). If these questions float your boat only half as well as mine, this is your book to get.
If now I am going to detail a few disadvantages of the guide or a few difficulties one has to cope with, this should therefore not deter anyone who's into raptors from purchasing it. Nevertheless, I'd like to mention them. Why? Because this is my blog and I want to.

This book is primarily aimed at being an identification guide, yet as such it is often difficult to use. As with gulls, one species of raptor is - when it comes to species ID - actually several species because its plumage differs with age and according to its morph or sometimes even (slightly) sex. Certain identification problems between two species for example only occur between certain age groups or with one single colour morph. It sometimes therefore appears that the identification criteria in the guide are scattered too much and can be found both in the "traits" section or in the section on similar species. That makes for difficult reading especially as one then has to switch between different species accounts as well. This problem mostly occurs with the Red-tailed Hawk, a species I have spent quite some time with reading about and watching out in the field. Especially concerning the Buteo-Hawks with their numerous colour morphs, a few charts highlighting the ID criteria for each problematic group (dark morph, pale morph etc.) or an extra chapter that only focuses on some of the problem cases would have been desirable.
Without this one is left with reading up a lot of the information, sometimes even copying some parts of the text with pen and paper and making up one's own identification article, using his descriptions to work out how exactly similar forms differ and on what part of the bird one should focus the attention when confronted with one of these problem cases out in the field.
And frankly, this is something I want to see spread out right before me when I open a field guide, not something I expect to do myself.

But I want to make clear that I regard this as a general problem with many, many identification books or articles, actually so much so that I have decided to write up an entry for this blog entirely devoted to this issue instead of misusing the poor Wheeler Guide to demonstrate why I am often left rather frustrated. All in all, this is one of the field guides that deals with the problem described above BEST, so this criticism is a little bit misplaced here. As I said, I'll write about it some more in an extra post.

And finally a word about the photos.
They are wonderful and stunning. It seems almost unbelievable that basically each colour morph or subspecies is not only depicted, nope, it is also shown on a crystal clear, razor sharp and just plain beautiful photo. And he isn't even taking digital images, which has facilitated especially flight shots of birds significantly. He is still working with the good old slide films.
I was only fractionally dissatisfied with the photos of Gyrfalcons because there is no photo that really shows the species in normal soaring flight with the wings fully extended (important for wing formula). But then this is a difficult species to capture with your camera anyway, so I really won't complain.