The most interesting yet intriguing part about watching birds must surely be the regular encounters with the unexpected or to be more precise: the pleasure the gods of fate seem to draw from rendering us birders to ridicule as soon as we dare to interpret what we see in nature.

Like my blog's title. There really were many reasons to worry about the falcon's behaviour after the female had left him alone for too long. You see, as a reaction to my writing on the local email-forum about having seen him on another building but the Bell Tower, someone else came forward with the scandalizing news that he was even seen on top of a power station chimney recently! A chimney? How low can one male falcon sink when let off the leash?

And while I was standing at a bus station opposite the Bell Tower on my way to get some groceries and wondering how to re-name my blog (School of Dentistry Building Birding was bound to scare readers away, I mean, who enjoys reading anything related to a dentist?), out of a clear blue sky came ... well, you guessed it already and if you didn' t there's no need to admit it because I am going to tell you now anyway: the FEMALE!
Yes, January 2nd saw The Return of the Wife, after more than two weeks of absence.
What a relief!

Man, two days earlier and I would have felt no need to get nervous about giving my blog a silly name, but nevertheless she was just in time it seemed to get things right again.
He was all excited, too and they were playing around in the air, calling and chasing each other. What a hypocrite! I wonder if she'll ever learn about his loitering around town while she was away?
I thought the pack of displaced Bell Tower City Pigeons might tell her to get their revenge, but then the falcons just disappeared!
Yes, they are both gone for two days now, must be the longest time ever I haven't seen the male at the tower. Surely the moment I click the publish button of this post and walk up to the window, I'll see them both perched on top of Bell Tower, but for now they are gone.


Yesterday I walked along the Huron again, from Fuller Park all the way to South Pond and back. Amongst the more usual species I encountered were also a few unexpected observations, e.g. of a Hairy Woodpecker, quite a few Red-tailed Hawks and also a beautiful adult Bald Eagle that was circling above the river right next to down town Ann Arbor. The latter was far more impressive than these lousy pics of a White-tailed Sea Eagle from Germany but yet again: that's all I have at the moment. 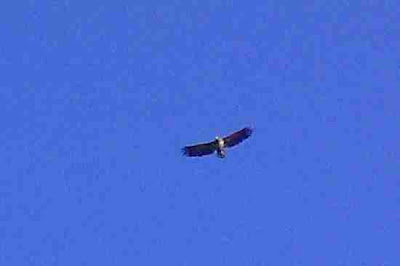 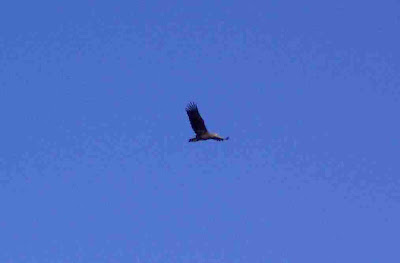 I really enjoy raptors and it seems they like me, too because they always show up at the right places to deliver cheer and joy to the lonesome and bored office worker that I am.

You want proof?
Here's a list of the raptor species I saw around down town Ann Arbor, mostly from my desk at the apartment:

Don't worry, I am sceptical and try to maintain a scientific approach when birding and after "The Return of the Wife" not even I would put any trust in my own interpretations. But here's the list of raptors I saw from my office window in Germany:

So never mind a single Peregrine in Ann Arbor going wild. I do like raptors and I'll stick with Bell Tower Birding! The name got saved at last.