Back - but not completely

Good grief, I haven't put anything up on the blog for almost an entire week. The longest time EVER Bell Tower Birding was off-line. Mind you, Surfbirds still hasn't returned, and that's serious...
The reasons are manifold and include endless work assignments, illness and pestilence amongst the other usual catastrophes but I won't go into the details. It's bad enough as it is and it will sound like a bunch of lame excuses anyway. Talking about excuses, there's no time really to write a proper piece of text today either, so a few pictures will have to do.

I got some new images yesterday, so I can illustrate a few of the adventures I wrote about ages ago. Like the Snowy Owl Laurent and I went to see almost a month ago (which incidentally was about the last time I went birding). For the complete story, go here (again).
And here's the pictures.

The first picture below clearly illustrates the pristine natural state the owl's chosen landscape in South-East Michigan was in. This is definitely the best choice a bird from the vast wilderness of the North could make:
A dead pine trunk stripped bare of its branches to sit upon on the banks of a flowing river with large expanses of barren Tundra in the background to survey for lemmings. 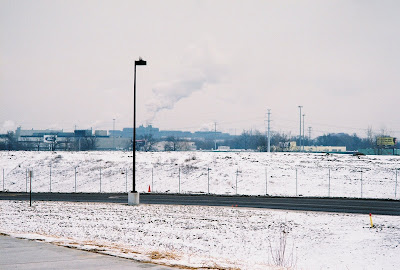 You can even see the owl on the picture. Well, no you can't, but you can believe me that the white blob on the street lamp ... er ... pine tree is not snow but really the owl.
The next image below demonstrates our vantage point from where we watched the owl at first. As you can see, it was extremely cold, windy and tough as well as in the heart of the wilderness but we just had to brave it, we had to and yes, it was worth the pain... 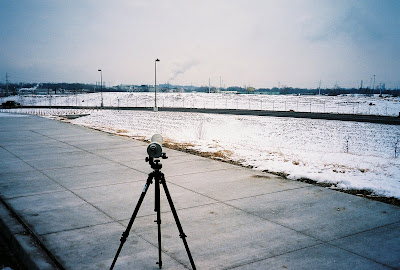 ...until Laurent suggested we move into the bakery just adjacent to the parking lot we were standing at, sat down in the comfortable armchairs in front of the window, got ourselves some donuts and coffee and watched the owl from there. Here's a pic of your Bell Tower Birder doing just that. 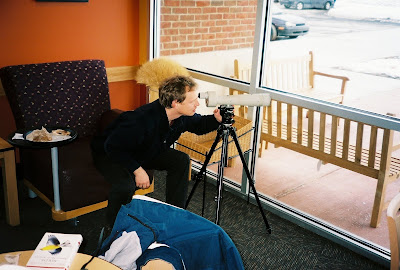 Smart choice and thanks again, Laurent. You see, Laurent is relatively new to birding (advancing fast though) and has a far more practical and open-minded approach to it than I have. It might not seem classy or appropriate to watch a SNOWY owl from a heated room when you start to consider it, but once you've considered it through, it is a damn fine choice to make and stylish as well to say the least.
Posted by Jochen at 14:34

Only thing that was missing was a nice and warm Gluewein, he he

Oh yes, I do indeed miss a decent gluehwein once in a while. We have made some ourselves here but it isn't quite the same as buying some in a winterly downtown street on an evening's walk through the ancient old city... sigh!

That's a great post Jochen - I wish we'd had a bakery around to sit in when I visited Germany last year: one with a view of a Black Woodpecker maybe...oh well, next time...

Don't remind me, darn! I was so mad when I later found a territory in one of my breeding bird survey sites. But there it would have ONLY been the Black Woodpecker, the rest of the birds there was not quite as exciting as around Greifswald.
Yes, Charlie, you said it: next time. You know you have to revisit, it's the law...sort of.