A Cold Spell and Thoughts on Invasive Species

Last week, my wife and I had decided to rent a car over the weekend to ... well ... get some shopping done (oh, great) but to also get away from Ann Arbor and see some other landscape for a change (oh, great!!).
Then on Friday, the weather forecast announced that a strong Arctic front was about to sweep across South-Eastern Michigan over the weekend with strong winds and extremely low temperatures. Or, as David Sing from the local birders email-forum put it very nicely: "Winter is flexing her muscles this weekend, and trust me, she's been working out".

We still rented a car and the Arctic front came with force. Here's today's weather (temperatures in degrees Centigrade) and it wasn't much different over the weekend, except that the wind was much stronger: 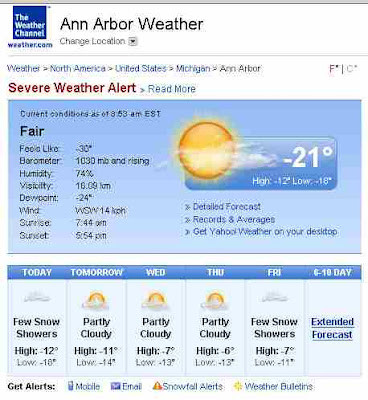 Shopping on Saturday was as fundamentally exciting as it always is, but at least we were sheltered from the snow storm outside. I had hoped for a few Snowy Owls on the parking lots of the malls we went to but no such luck.

Sunday then was great. It was still very cold and stormy but no snow and sometimes the sun was even out. We therefore decided to drive the 2 hours to Pelee National Park because a) I love the place b) I was curious what it would be like in winter and c) with two beaches to choose from, there was always an opportunity to shelter from the wind and still walk along the lake shore.

I'll get a full report online as soon as I have the pictures digitalized. Meanwhile, here are some thoughts on so-called Invasive Species and once I get started, the connection between this aspect and the current temperatures will be obvious:

Quite a few expression in language are highly deceptive regarding the severeness of their content.
The classic example is that soldiers don't die or get killed, all they do is fall. Well, unless I read in the news that a soldier fell, got up again, rubbed his knees and went home, I don't think that term is appropriate and I don't really want to read it in that particular context.
Or - as Charlie Moores recently pointed out - the Oil Spill. Unless that relates to some ship's cook accidentally discarding a gallon of old palm-oil from his deep fryer into the sea, it doesn't really describe the carnage and catastrophic long-term dimension of such an incident very well.

Another expression that describes a class of ecological catastrophes and that is decisively misleading is "Invasive Species".
According to wikipedia, an invasive species is defined as "a species ... that was introduced (usually by man) to a non-native ecosystem, where it became harmful to the natural environment or to human health."

So far so good, but now to the definition of "Invasion" (again from wikipedia):
"An Invasion is a military action of soldiers entering a foreign land".

And that's the interesting part of it. An invasion is not defined as "tossing some soldiers against their will into a foreign and hostile land without a chance of bringing them back home to see if and how they survive or not".
But that's what has been done with birds we call "Invasive Species".

Here's a short story of the introduction of the European Starling Sturnus vulgaris to North America:
The introduction of the Starling was motivated by a want of a certain Society to introduce all species to North America that are mentioned in the works of Shakespeare. This was really stupid. That silly Society should have followed Poe instead and prevented the extermination of Ravens from much of the Eastern U.S. back then, but no - it had to be Shakespeare.
So on a gloomy April day (and I hope the weather was foul, too) in the year of 1890, a total of 80 birds were released in New York's Central Park. Another 80 were released the following year and this formed the core population that comprises the ancestry of all 200 Million Starlings living in North America today. There had been very promising introduction attempts before that were ecologically extremely successful (meaning the birds did not spread) but sadly these early victories for nature conservation did not lead to common sense. An interesting account of the early years (until 1928) can be found here.

What do Starlings have to do with the cold weather and Point Pelee?

Very simple: after we entered the Park and drove towards the information centre, we found many birds sitting on the freshly sanded parts of the road. These were Northern Cardinals, White-throated & American Tress Sparrows and Starlings.
The Starlings were in an awful condition! While the Sparrows and Cardinals quickly flew off at the sight of the approaching car, the Starlings were mostly sitting in the middle of the road, some already lying on the ground, too weak and exhausted by the cold to move at all. Many had already been run over by cars and when I stopped right beside one and looked down upon it, I could just feel the bird's comprehension of inevitable death and panic. A few Starlings had managed to find themselves a more sheltered position under some grass bundles at the edge of the road but still these were equally distressed at not knowing where to migrate to on this strange and unfamiliar continent.

Frankly, I would think that those Starlings seeking shelter from the wind under bundles of grass would have been clearly more than upset if they knew they were now actually supposed to reside in this kind of area and weather (these are night-time temperatures in degrees Centigrade): 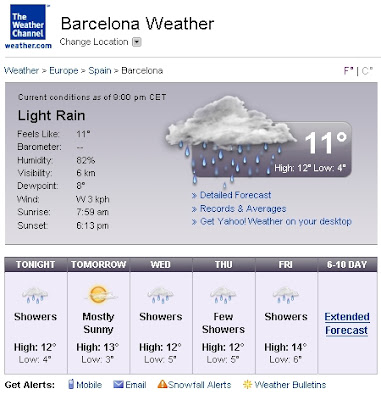 And I am sure those Starlings on the road had a very clear idea that they either weren't meant to be there at all or that indeed life really sucked and was treating them unkind.
And they certainly were not happy about having to compete with Northern Cardinals and White-throated Sparrows!

There is no doubting the necessity to act against the effects of so-called "invasive species" as they are doing a lot of damage (to say the least) where ever man was dumb-witted enough to release them. If it makes sense and might lead to success, I am certainly not opposed even to rather violent measures that include the killing of large populations of introduced birds (or other introduced animals and plants for that matter).
But what I strongly oppose is the dislike that these animals are met with by many conservationists or birdwatchers.
They never wanted to be introduced to other continents and certainly never meant to invade anything but their proper wintering grounds. Many don't even seem to like it very much where they are now. They don't deliberately compete with native species. There certainly is nothing "invasive" or aggressive in their character that makes these species prone to taking over foreign lands and drive away other (native) species. It just seems too easy and unfair to name these birds "invasive", suggesting the ecological damage they do is part of their nature and their own fault when really it is all our fault!

And if we have to act against them, even kill them, it should always be with pity for the individual and an apology on our lips because we are punishing them for our mistakes!
Posted by Jochen at 15:27

"And if we have to act against them, even kill them, it should always be with pity for the individual and an apology on our lips because we are punishing them for our mistakes!"

When I was birding in New Zealand, I absolutely hated all the introduced species because of the destruction they do. Being in North America now, I suddenly find myself in a situation where people express strong dislike towards birds I usually enjoy, like Starlings, House Sparrow and Mute Swans.
And that got me thinking...