March last year was dominated by two bird species.
The first one was a Great Grey Shrike that had been staying in a relatively small area of bushes and single trees in a vast expanse of fields and meadows east of Jarmshagen, which is close to Greifswald, North-East Germany.
The image below shows the area where it could be seen frequently, and where I also watched it with Charlie Moores during his short visit (see, yet again, his report here). 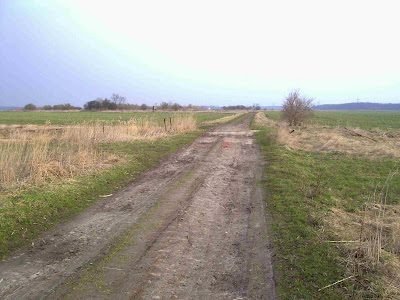 Although this looked like an ordinary Great Grey Shrike at first, there were certain characters that struck me as peculiar: first up, it was very approachable and mostly allowed observers to get as close as 15 metres without getting too nervous. Considering that a Great Grey Shrike usually prefers to have an area the size of a small country between itself and any human being, that was indeed unusual.
Furthermore, certain plumage characteristics were at odds with the Great Grey Shrikes I had studied before, although I must confess this had never happened with such scrutiny as on this bird:
- The white wing patch was restricted to the primaries and extended up to about one third of their length.
- The primary projection beyond the tertials looked rather large.
- The tertials showed only a limited amount of white on the tip.
- The lores were slightly pale, more dark grey and not as black as the mask.
- The rump appeared clearly white when seen well or at least very pale grey and much paler than the back.
- The tail showed an extensive white area, with the outer-most tail feather being completely white and the next one about one third of its length.
- The breast was pale grey and in slight contrast to the white throat.

Here are a few images I got, not very good but as I always say, a picture is better than not a picture. 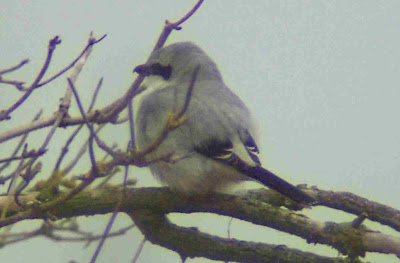 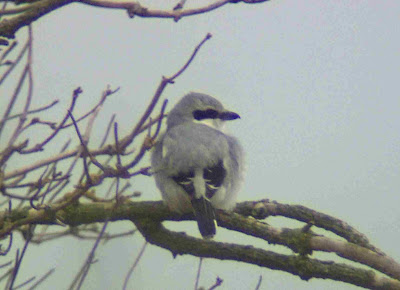 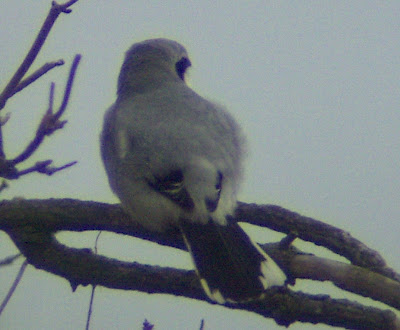 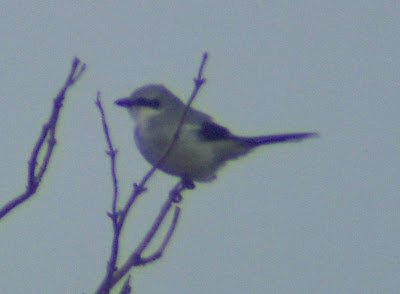 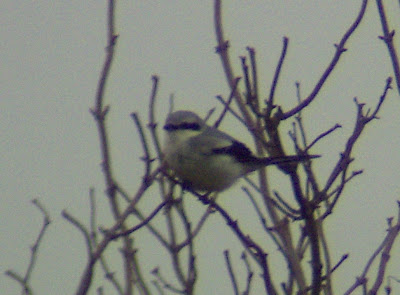 Some of these characters, like the paler lores and the longish primary projection, pointed to the bird belonging the the distinct form pallidirostris, which would have been a first national record for Germany (especially with the form mostly recognized now as a separate species and not just a subspecies), while other characters clearly contradicted any tentative identification approach in this direction.
Most pictures of pallidirostris you will find in identification articles or galleries are of vagrants to Europe and show birds in juvenile plumage. These look very different from the bird shown above which is why many fellow birdwatchers shook their head quite sternly when I mentioned I was not quite willing yet to entirely drop this possibility (even though I gave it a very small chance of turning out to be that species), but a short glance at potential - or rather quite certain - adult pallidirostris here demonstrate that things were not so easy after all and needed to be investigated further.
An extensive search of online pictures and articles as well as the reading up on most of the relevant books and articles on Shrike identification finally - and definitely as predicted - helped to rule out pallidirostris and showed the bird to be a (probable) female nominate bird possibly from the far North-East of the species' breeding range (hence the longer than usual primary projection) where birds look different from what we normally see in central Europe.

Even though it turned out to be not a rarity at all, this nevertheless was a very special bird that really boosted my interest in the variation and identification of all forms of the Great Grey Shrike complex, which is part of the reason I got so excited about my encounters in North America.
I love birds that teach you a lesson on bird ID.


The second bird species that got me entertained throughout the winter but for which my excitement reached unprecedented heights in March was the Arctic / Hoary Redpoll.

From December 2005 onwards, the birders in neighbouring countries, like Denmark, Poland and Sweden, were more than happy to welcome a significant amount of Arctic Redpolls during a no less significant invasion of Mealy Redpolls. Arctic Redpolls are a first degree national rarity in Germany and are not even recorded every winter, and with birds showing up all around us, even in the Netherlands where they must have presumably crossed German territory to get to from Scandinavia, I set out to find one or maybe even a few myself.

So when everyone else was concentrating their birding time on waterbirds at the coast I was driving through the fields and meadows of the hinterland in search of Redpolls. Quite a different winter experience.
The problem was apparently not finding one as there were Redpolls all over the place and it was not difficult to find a daily total of several Hundred to scan through. The problem was recognizing an Arctic Redpoll when looking at it.

The Redpoll complex is almost as notorious as the Crossbills and this post is not intended as an identification article because frankly, who am I to write anything about Redpoll identification?!
See, that's right, all I have done is read up a lot in birding magazines and look at a multitude of photos on the Internet, and then of course I have looked at very well over 1.000 Redpolls in the winter of 2005/2006 but unless you have handled, photographed and measured each individual Redpoll on this planet I am sure you have only a faint idea how much their plumage can vary.

The "classic" field marks to separate an Arctic Redpoll from a Mealy Redpoll can basically be summarized as follows:

Arctic shows...
...(almost) white undertail coverts whereas Mealy shows mostly prominent dark arrow marks,
...a thin and faint streaking on the flanks reminiscent of very fine lines drawn with a pencil whereas Mealy shows broad streaks that often melt into two or three parallel stripes down the flanks,
...only a faint shade of rosy in adult males whereas Mealys are often bright red,
...a fine and delicate bill whereas the culmen is much longer in Mealy,
...an almost unmarked pale brown head, laking Mealy's supercilium and dark markings on the ear coverts,
...a paler mantle,
...a bright white rump roughly the size of a piece of lump sugar,
...and finally has slightly different, higher calls.

This is very likely all true as it comes from people who unlike me have a lot of field experience with Arctic and other Redpolls. However, I have found many of these characters to be either subtle, too relative to be assessed with certainty or overlapping with Mealy Redpolls to such an extend as to render them quite useless when trying to identify vagrants that have to be documented and submitted to a critical committee for acceptance.

Bill size for example appears to be a really good feature until you stumble across this rather obvious Arctic Redpoll. The paler mantle sounds good as well until you take a look at this Mealy Redpoll and compare it to this Arctic Redpoll. Oh and while we are checking the latter, just glance quickly at its head colouration and judge for yourself how uniform and pale brown its head is.
And the tale goes on and on and on and on....

Eventually, after much reading, looking and dropping what had appeared to be a bunch of good ideas, I came up with the following key criteria that a bird I was going to call Arctic Redpoll had to show:
A) Completely white undertail coverts (some Arctics have thin stripes there which overlap with Mealy whereas Mealy apparently never shows completely white undertail coverts)
B) A completely white rump
C) Very fine thin stripes at the flanks (some Arctics resemble Mealy in this respect but apparently no Mealy shows the very few, very thin and delicate streaks of an Arctic).

I knew I would probably miss out on a few Arctics using these criteria but then again, knowing they are a very rare sight in Germany and considering it unlikely to get an accepted record with a less stringent approach, I thought that was OK.

This can get frustrating.

But I am in no position to complain. Using these rather strict criteria I was able to track down at least 6 different Arctic Redpolls during the winter of 2005/2006, far, far more than I had hoped for.
But why did I get so excited in March, after I had already found 4 different Arctic Redpolls in North-Eastern Germany?
Because it is so nice to find such a rare bird on your home patch, the surroundings of Geifswald, and that's what I did. Finally, after many searches around the city throughout the winter, I was able to locate a flock of around 200 Redpolls just a bit to the North of Greifswald and after roughly 2 hours of observation I managed to identify 2 Arctics amongst the Mealys. This was brilliant, the great price after so much hard work over the winter.
In addition to being a rare bird found on my home patch, this was also I flock I could get fellow birders onto and in the next couple of days quite a few went out to search for the Arctics, and a few of them found them as well.

Here are a few pictures I managed of those two Arctics. The first bird is an adult male. They are of a poor quality but by looking closely and showing some good will, you can see the fine, pale grey streaks on the flanks that are so indistinct they are barely visible, the nice shade of rosy on the breast, a relatively uniform warm buffy head colouration and if Blogger wouldn't mess up pictures so badly you could clearly see the completely white undertail coverts on the second, heavily cropped image. 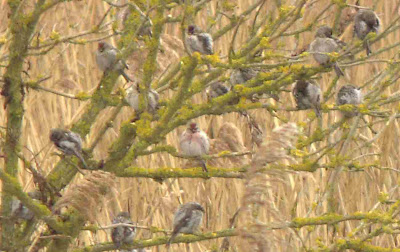 The following pictures probably show the immature or female Arctic within the same flock, although the pictures were taken on another day. I am actually not entirely sure it shows the right bird. I was checking the flock perched on a fence and found the female-type Arctic which I clearly identified using my three key criteria. The moment I had brought the digital camera to the scope the flock flushed however and landed in a nearby bush. Knowing I had only around 60 seconds until the flock would flush again, I just roughly checked the Redpolls and as soon as I had found a potential Arctic fired away with the camera. Then, after only 2 pictures (talk about "firing away"), the flock flushed again and I never managed another picture.
Now, the following image shows a bird with a white rump and - on the second picture - finely striped flanks. I never got a decent look at its undertail coverts though, so I won't identify it. But it seems likely this really is the Arctic I was able to identify on the fence.
What you can also see on the bird to the right is that Redpolls often fluff up some white feathers on their back, a little bit like an Olive-sided Flycatcher, giving the impression of a white rump. The second picture however clearly reveals that the rump on the bird is pale brown, clearly identifying it as a Mealy Redpoll. 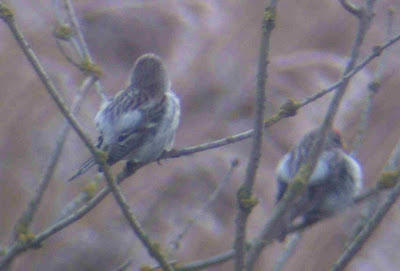 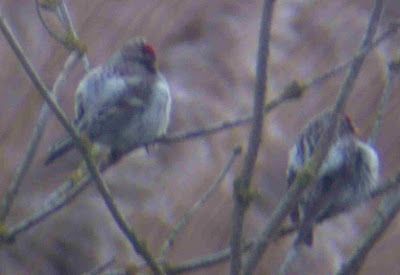 Those were the most memorable birding moments of March 2006. There were more, like the flocks of 30.000 Greater Scaup and the omissus-type Herring Gulls, but that's another story.
Posted by Jochen at 17:29