The First Warbler of Spring!

Oh, it has started, warbler migration is here, they're all coming back!

Warblers, or rather the New World group of Wood-Warblers (mind that dash or you'll end up here instead of e.g. here where you'd rather be) have been quite a common theme in the blogosphere lately, as can be seen here (longing sigh) and here (sigh that again).

So now I am very happy, and I mean very in the way that is used to define very, hence in a very very way, to announce the Bell Tower Birder's first WARBLER this spring.

While checking the Arb's conifers for - what else - owls, I came across an unfamiliar bird song reminiscent of a Chipping Sparrow which I followed and eventually I spotted the singing source, a full breeding plumage Pine Warbler high up in - yes, classic - a pine.
And incredibly, there was a second Pine Warbler singing in another stand of pines on the other side of the Arb.

This was more than unexpected. There had been a few Yellow-rumped Warbler sightings around Ann Arbor which is usually the last species to go and first to come back up here in Michigan and I had been starting to wonder why they had eluded me so effectively. I think they are amongst the most neat warblers but highly underrated by birders because of their abundance so - with me really promoting their looks amongst fellow birdwatchers - the Yellow-rumpeds should show some faith as well, don't you think? Well, I am still left wondering why Yellow-rumpeds still haven't revealed their presence to me yet, but have gained a great perspective upon this year's spring migration as the Pine Warbler had been amongst the rarer species I encountered during my birding trip to Michigan/Ontario in May 2005.
Here's my warbler statistics of back then - May 2005 - just to bore you a bit further:


For those who skipped the chart: the 4 Pine Warblers I saw in 2005 made up only 0.28 % of the Warbler individuals I encountered, so seeing two yesterday does mean a more than good start into this year's warbler spring migration to me.

And to finish this post, here's a picture I have shown before on this blog but it is a Yellow-rumped Warbler, one of the few pictures I have at the moment of any warbler and I posted it way back in December 2005 when hardly anyone was reading this blog: 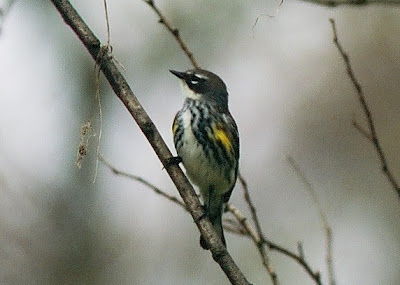 Happy Spring Migration to you, Jochen! I can't wait for my first pine warbler of spring. They and the Palm Warblers usher in the flood of wood-warblers quite nicely.

Nice table there. Though my own calculations are much cruder, I am confident in concluding that yellow-rumps make up about 80% of my annual warbler sightings. At least they're not House Sparrows...

This is so great, the first warbler! And I really like Pines.

About the Yellow Warblers dominating in spring 2005: a lot of local birders back then were remarking on the fact that their abundance was remarkable, so I am really looking forward to finding out how this spring's relative abundance will be.
And frankly, 80% Yellow-rumpeds is fine with me, they're great, the ultimate warbler.

I can't wait for the warblers to reach me...I'll be out looking this evening. And I agree, Yellow-rumps, or, as I prefer to call them, Butterbutts, are great!

great statistics....it will help me to focus on the most common ones first, in the next few weeks

I So can't wait for the warblers to start coming back! Great post and interesting list there!

just a thought, but last year you came later in michigan (in May I think), so I was wondering if you may have missed the bulk of this species...

Wow, comments! So it's warblers that do the trick!!

Yes, Laurent, I think I might have been a bit late for Pines in general, but when there was one seen at Point Pelee, the birding crowd was quite excited, so I don't think they are one of the really common species even within their frame of maximum migration.
We'll see and will be wiser in June!

We've already had several Parulas, Louisiana Waterthrushes, and the like -- I'll send them on up that way. :)

Oh I don't think bird-that-likes-to-walk-in-the-road was a White Wagtail, but let me know if you have any other ideas. (I think it was a bit more nondescipt than that, but it was a loooong time ago so I'm not sure.)

Hi Mon@rch!
Very happy you liked it and found the list (and my post!) interesting. Great blog you have there yourself!! That's the best part about comments: learning who else is blogging about what.

Hi Rurality!
Yes, the Kirtland's was truly amazing. It was the "famous" bird at Point Pelee in spring 2005 that stayed for more than a week and eventually approached birders (not vice versa) to within a few feet. I had it hopping on the ground virtually in front of my boots and singing at eye-level in a branch 2 - maybe 3?- feet away?
I'll use my Michigan connections to try and send one through Alabama and it's nice of you to send up Louisiana Waterthrushes and the gorgeous Parulas. I am so curious what my second warbler species will be (want to bet on "Yellow-rumped?).
Hmmmmm, the bird-on-the-road mystery. Do you remember anything about it? Size for example? Was it more solitary or more in small flocks? Inside towns or out in the open?
We'll find out, we'll be getting there!
I just love the humour on your blog!!

Well I do remember that the bird was solitary, and sort of nondescript, but that's about all I remember. Our car broke down on Friday when we were halfway to the place we were going, so we had to just wait til Monday to get it fixed. So we got a hotel at a little town and just walked around everywhere. This was in July I think. I still don't know why I never thought to take a picture of it! Like I said I was just getting started in birding. It may have been a wagtail after all... I didn't know how to look for field marks so I might have totally missed all that pretty black.

I have often thought that if a Kirtland's ever did come through this way, nobody would ever believe that I'd seen it! :)

Oh the "butterbutts" are with us all winter here. They are one of the few that stay around here during the cold weather. So by this time of year, before they've all left, people will excitedly raise their binoculars, and sigh and say, "Oh it's just annother butterbutt!"