Winter is back.
Well, at least it isn't 20°C anymore, there are occasional incidents of sleet or rain and even though most of the lakes are almost freed from their cover of ice, the little puddles and muddy paths are mostly frozen over again.
Last Saturday I went birding in Superior Township with Laurent. The local email forum has been full of reports from Superior township all winter, with observations of Snow Buntings, Lapland Longspurs, a multitude of Rough-legged Hawks etc.
I never knew really where Superior township was but it sounded so Nordic, like somewhere on the Upper Peninsular close to the shores of lake Superior and therefore was full of those sought-after northern migrants but I someday found out that Superior township is directly East of Ann Arbor and I could have gotten there even without a car by bus and hiking boots.
Two roads lead through it - well there's more but these two are the good ones to go birding along - which are called Vreeland and Cherry Roads. Vreeland goes through a lot of open fields whereas Cherry leads back towards Ann Arbor through more wooded areas.
Having heard so much about birding in Superior township I was full of expectations when Laurent picked me up in downtown Ann Arbor on Saturday morning. As if the weather had decided to show some sympathy regarding my erring about Superior township being somewhere up North, it was unpleasantly cold. The cold was in fact so unpleasant that it instantly inspired me to a birding poem which goes like this:

And through the drifts the snowy clifts
Did send a dismal sheen:
Nor shapes of men nor birds we ken-
The ice was all between.

The ice was here the ice was there,
The ice was all around:
It cracked and growled, and roared and howled
Like noises in a swound!

I thought that was kind of a good few verses but later found out that Samuel Taylor Coleridge had almost the very exact idea when he wrote his "Rime of the Ancient Mariner" in 1797-1798.
What an astounding coincidence! So that proved that I shall stick with birding rather then try to make a fortune with poetry.
So here are the birds:

Was birding in Superior township really superior?
It was pretty good, honestly, but sadly the analogy between our birding day and Coleridges "Mariner" ended after the word "swound" and not after:

At length did cross an Albatross

Well, maybe pelagic birding in the fields of Washtenaw County in Michigan is asking a little bit too much.
No, even without tube noses, the birding was really good. It started at the first corn field we came by where we spotted 4 Sandhill Cranes. After parking the car and getting out to look more closely we at first could not relocate them because the field was divided by a line of trees with the Sandhill Cranes being hidden from direct view. Nevertheless we were quite happy at finding the field right in front of us covered in a total of 8 Killdeer (or Killdeers?) and a few American Robins. There was a constant honking of Canada Geese from a small wetland in the background and the occasional Red-winged Blackbird and Common Grackle flew over. Finally we spotted the Sandhill Cranes again but just as I had gotten my scope onto them a nice military jet flew over quite low and they flushed.
Wow, thanks, that was army strong timing... 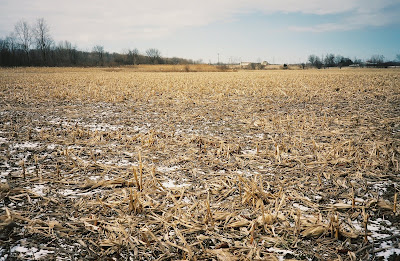 the land of Cranes and Killdeer
We proceeded along Vreeland Road until our next stop a few hundred meters further where we checked a hedgerow that sheltered a nice assembly of Dark-eyed Juncos, American Tree Sparrows, a Song Sparrow, White-throated Sparrows, Northern Cardinals, American Robins and 2 Eastern Bluebirds from the icy wind. Nice assembly, especially the Bluebirds.
A small wetland besides the road had an American Black Duck amongst the Mallards and Canada Geese but the birds were so close that we couldn't really stop and enjoy them because they would probably all have fled the pond upon us getting out of the car.

Further on to the East the landscape opened even more with extensive fields to both sides of the road. It was here that we encountered the star bird of the day in the form of an immature Northern Shrike.
I am not a good bird painter. Actually I am not a bird painter at all. And I am also not very experienced with North American birds in general. So all in all I am not in a very good or comfortable position to question Sibley's work. But this was the second Northern Shrike I saw this winter in Michigan, both were immatures (and I would guess most birds reaching this far South in winter are) and both looked not even remotely like the paintings Sibley presents in his field guides!
After our rush of Shrike Enthusiasm had abated somewhat we proceeded and finally found one of the species we had set out to find: the Horned Lark. We actually found quite a few on eastern Vreeland and along the road to the North that connects Vreeland with Cherry. All were of the local breeding population (Prairie subspecies) and were in a full swing of spring mood, singing and chasing each other and showing off. We even saw a single female amongst the many males which helped to explain what otherwise would have appeared as childish courtship misbehaviour. Oh and there was another distant Sandhill Crane flying West. 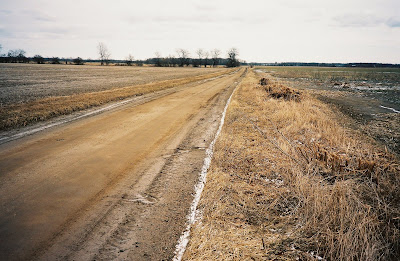 Horned Larks all around us
The drive back along Cherry Road proved to be not quite as productive as the forests seem to be almost devoid of birds during the migration periods. I have also noticed this last fall/autumn. In winter there are always a few sparrows around or cardinals and chickadees, but as soon as migration sets in it seems the woods and forests spit out all their birds onto the hedgerows and fields and enjoy a few moments of silence before the breeding frenzy of May sets in.
What we did find however while checking a few road side pines for owls was a Red-breasted Nuthatch. This was only my second encounter with that species, quite to my surprise as they were rather common in May 2005. The Red-breasted Nuthatch-site also hosted a show of a Sandhill Crane flying directly overhead, which we decided to enjoy. Highly recommended. It is funny how the flight behaviour and silhouette of the Sandhill Crane seems to resemble a White Stork much more than a Eurasian Common Crane.
The last bit of Cherry Road has a small pond to its eastern side which we quickly checked for Wood Ducks. Well, no luck this time, but 2 immature Trumpeter Swans and a bunch of Ring-necked Ducks and Lesser Scaup weren't too bad to see either.
Those two paler spots below are actually the swans, and that light little pixel in between might be a duck. 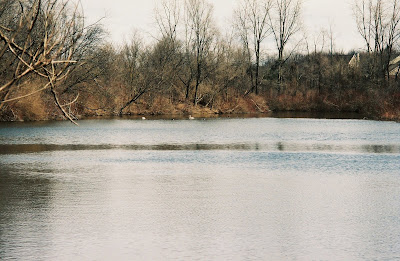 We finally left Superior Township and drove back towards Ann Arbor. On our way to a coffee and cake break downtown we quickly paid Gallup Park a visit which rewarded us amongst others with views of Bufflehead, Common Merganser, a lone male Red-breasted Merganser and a Horned Grebe, the latter two pretty good birds for Gallup Park.

After our downtown coffee break we headed out for an afternoon at Ann Arbor's Matthaei Botanical Garden. As before the woodland trails proved to be almost devoid of avian life forms. Even the more open spaces in the garden's East didn't produce any thing but nice landscape, as seen below. 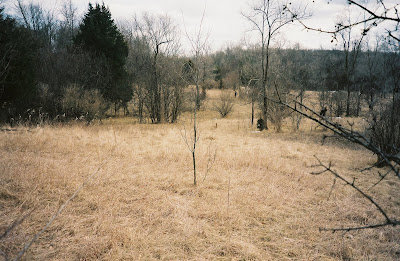 Around the main office and its pond however we finally found Black-capped Chickadees, a Downy and a Red-bellied Woodpecker and plenty of Red-winged Blackbirds that have now added the incredible flashing of their red shoulders to the already intense effect of their voice. And of course there were a few Canada Geese around. 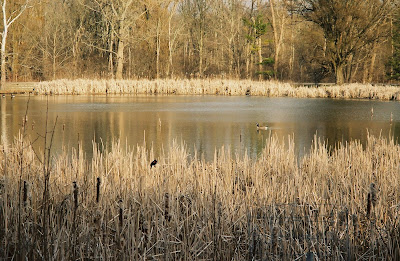 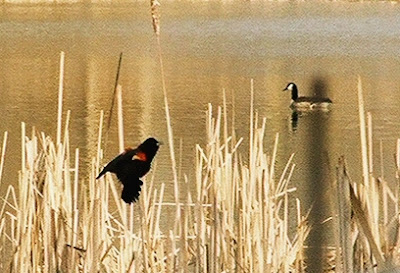 The skies (all day actually, not only here) were often decorated by the silhouette of a Turkey Vulture and a single male Wood Duck flew over.

ha ha, dont worry, we will get the rare and therefore unvaluable Owl of the arb.

We just need a good systematic plan, a few owling trips at night, some triangulation, and admitly, a bit of luck. And warm clothes too...heh heh

What confuses me though is that we will surely find a Burrowing Owl on the central grassland of the Arb, but that's a diurnal owl, so where the heck is it and what is taking it so long to show up??