Something I had found hard to believe

"Surely, they are just kidding."

"They can't be serious."

Nope, all wrong!
This wasn't, they weren't and they were, I should have trusted the weather forecast:

After more than a week of what felt like summer, it is stormy again, cold to say the least and while I am typing this the white lines of snow flakes zipping past my window are pointing straight to Florida again.

It sounded far too bad to be true, but then again, there were signs - literally - that were giving fair warning of what has descended upon us again. 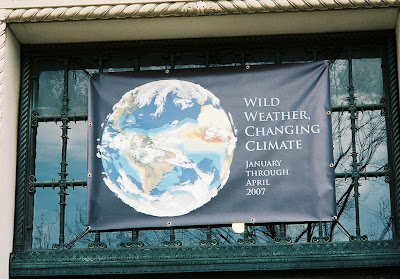 The Museum of Zoology informed us quite plainly that due to global warming, we'd have to expect wild weather from January all the way to April this year.
Had I only taken it seriously, I could have prepared myself for this.

I just hope "April" doesn't mean until the end of the month!
Posted by Jochen at 22:39

Me too! April should be spring, even in Michigan.

It's just a big mess, really.