You'll Know What I did last Monday

You know why I am not seeing Yellow-rumped Warblers?

Because these guys are smart, really smart.

Sure, we had a week of fabulous summer weather, but look at that, the weather forecast for the next few days: 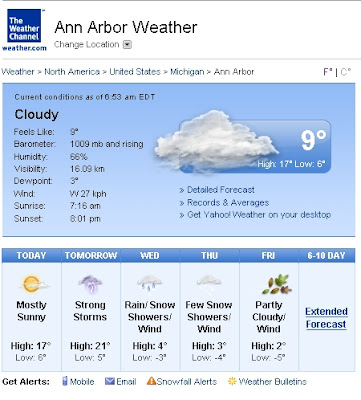 Take a look at Wednesday, a drop from 21°C to 4°C, that is going to get pretty rough and let's hope these apparently somewhat more naive guys are not facing troubled times.

No, it wasn't raining, the weather was actually fabulous, no, it was so sad: I couldn't go!
It was an ordinary work day for me and due to the time shift between here and Germany it was not possible for me to leave my laptop until around 1:30 pm, too late to drive to the loon.
Of course Bruce found it and watched it nicely and of course I am very happy he did and here is the link to a picture he took, but what was I going to do with the wonderful day's birding potential?

Sure bet: go to the Arb and Gallup Park after the German work period, which translated to Michigan time meant after around 1:30 pm - as I have already mentioned.
A few short emails and Laurent and we were to meet at the Arb at 2 pm to see what was going on.


Question: how do you recognize a good birding day?

Answer: leave your downtown apartment, look up and spot 2 Peregrines, a Turkey Vulture and a Sandhill Crane circling over the high rise buildings.

Simple as that, the day was going to be brilliant.

I arrived at the Arb at bit too early and decided to take a small detour through a more remote corner of the Park where I thought there might be an owl or two hanging around a few pine trees.
Well, there weren't, there are never, but I came across my first Hermit Thrush of the day and a bunch of King Sparrows (which are commonly called Fox Sparrows, but I like King Sparrows much better because they rule) hanging around with Dark-eyed Juncos. Good start!
I failed in finding the Chipping Sparrow that was singing which was not good because I found it the next day and it turned out to be not a Chipping Sparrow after all but a Pine Warbler which I would have liked Laurent to see. Now, don't make fun of me, I am still learning the bird songs around here and they are somewhat similar.

After meeting Laurent and a fly-over of 5 Sandhill Cranes, we went straight to a section of the Arb where he had found a flock of Fox Sparrows the same morning and sure enough, there they were again and it seemed the forest floor was just a bubbling layer of Fox Sparrows kicking up leaves. OK, I might exaggerate a bit, but to see 7 of them together after having had quite a tough time finding them during Fall migration, this was a sight worthy of a King - see, King Sparrow would indeed be a much more suitable name!
We subsequently climbed a small hill with a few dead pines because Laurent wanted to see if he could show me a Thrush he saw that morning. We didn't find a Thrush. Frankly, we couldn't have cared for a Thrush at that moment - and that from me is a rare statement - because what happened next was the best woodpecker moment of my life.
OK, I had three Black Woodpecker once in a territorial fight around 5 to 10 metres around me for a good 10 Minutes (sorry Charlie) and that was also pretty good, but there, at the Arb and at ranges less than 5-10 metres, we had within minutes close and prolonged views of a Red-bellied Woodpecker, 2 Downy Woodpeckers, a Hairy Woodpecker and 2 male Yellow-bellied Sapsuckers at a "tree tab" and finally a Brown Creeper and a handful of White-breasted Nuthatches completed the show. Oh, I know what you think, that's not all that special, a handful of woodpeckers up close, what's the big deal here?
Well, just to get an impression of how close the woodpeckers were and how nice the situation was, check out Andreas' gallery, because he went there the next day and photographed those Sapsuckers, the link is right here (go to "Woodpeckers").
Later on down towards the Huron we even added - amongst new arrivals like Eastern Phoebe - a handful of Common Flickers (the first ones I saw this spring), making it a 5-Woodpecker-Day.
Upon reaching the Huron, we chanced upon a small group of American Tree Sparrows which in itself is not all too unusual but strangely both Laurent and I struggled to identify them with the confidence we usually have - after a winter full of Tree Sparrows - in identifying them. We were really hesitant and I actually had to rationally go through their field marks, like the bi-coloured bill, to clinch the identification. They looked so neat and pale and maybe - after I have consulted the field guides - might have belonged to a more western population migrating through, hence differing from the birds that stuck around the Arb all winter. But that's just a guess...
It had gotten a bit windy and the open waters of the Huron down at Gallup Park were not as full of waterfowl as we had hoped. The shores were dotted with Red-winged Blackbirds and the usual Canada Geese, but it took actually even some sort of effort to find a duck, like the few Buffleheads that were around. We were not too disturbed by this as we were headed for the lower part of the Huron anyway where there had been a few nice reports of Common Loon and a few Horned Grebes.
If you look closely at the water surface below, you can still see that the waves show the typical pattern of having been disturbed by a Common Loon until very recently, but we were too late, the Loon had gone and so this is nothing but an empty picture of the lower parts of the Huron in Gallup Park.
It isn't quite completely empty though as we still managed to find 2, possibly 3 Horned Grebes there. To our sincere delight however, the Common Loon had apparently only left to give a small flock of Double-crested Cormorants some room, yet another first-for-2007 species and quite appreciated. 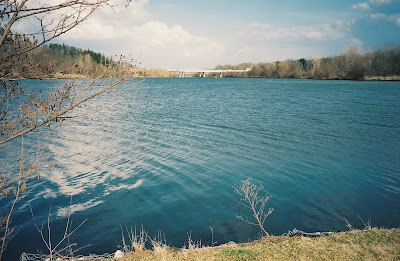 Horned Grebes are always nice, but the best - in my opinion - was yet to come. In this part of Gallup Park, a railway line separates the water seen above from another pond, called south Pond. South Pond is difficult to access and look at with the railroad dam in the way, but if you climb one of the many benches, you can just about scan the water. And surprise, surprise, it was not frozen anymore and there were quite a few Gadwall that really tried but had no chance at hiding a male Northern Shoveler and 2 Ruddy Ducks amongst them, and a small flock of Common Mergansers is always a treat, and was there as well or I wouldn't have mentioned them.

Walking back towards the car, we passed a small isolated pond close to a playground and pick nick area and amongst the usual Canadas and the local gang of Manky Mallards (seen in the background) ... 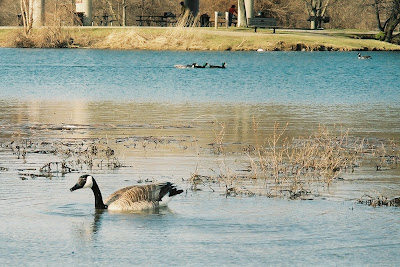 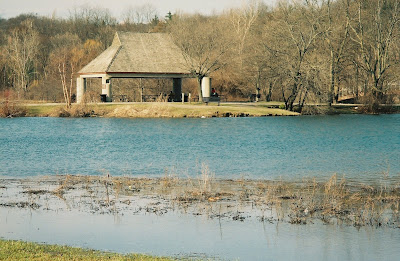 Didn't spot them? Well neither did we - almost- as they were so unexpected, but once I zoom in on them some more, you'll see what we were delighted at finding so approachable: 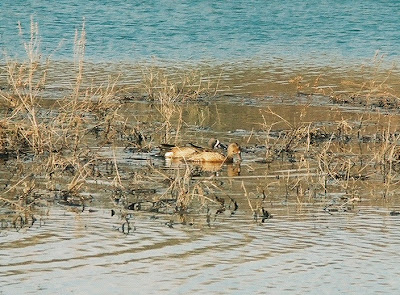 A pair of Blue-winged Teal! Very neat, indeed, and not only my first ones this spring and Laurent's first ones ever but actually the first ones I saw since May 2005 as there weren't any last fall!
OK, by now I suppose the picture has been conveyed that there was a fine and selective assembly of waterfowl, but just before we reached the car, at the very last instance, a male Ruddy Duck in non-breeding plumage was asleep close to shore on our side of the pond and it was this last and close encounter (maybe 10 metres) that brought this fabulous spring day's birding excursion to a glorious end.