Well, we had planned to start with gulls, had made several announcements and then kept the world waiting (in case the world had noticed) but now finally we have a lift-off: the first post in what will surely become a series of blog cooperation projects between Charlie Moores and yours truly, Belltower Birder. Within this cooperation we plan to combine whatever our respective strengths are to see if we can't come up with a good piece of bird blogging that each of us would not have been able to achieve himself. This time, it is the identification of the two waterthrushes and we hope it will prove helpful during this - and the next few - migration periods.
You can find the very same post on Charlie's blog here, by the way, as that's how the cooperation works.

It's spring, migrants are everywhere, and you catch a glimpse of what looks like a small warbler walking in a damp, shaded area. As you move closer you get better views- it's a brownish bird, streaked below, possibly a waterthrush, but - crucially - it's not calling. Your prize may fly off at any moment, so just what features do you need to concentrate on to make a positive ID...?

The two species of Waterthrush, Louisiana Waterthrush Seiurus motacilla and Northern Waterthrush Seiurus noveboracensis, are very similar to each other but are themselves easily distinguished from other species within the North American wood warblers. They basically form their own genus Seiurus, with the only other member being the strikingly different Ovenbird Seiurus aurocapilla. The Ovenbird though is so different from the two waterthrush species (in multiple aspects) that many authorities consider a review necessary that would then place the waterthrushes in a genus of their own. All three species, Ovenbird, Louisiana and Northern Waterthrush, share the following field characters that can be used to separate them from other North American wood warblers: The Ovenbird is easily distinguished from the waterthrushes by its lack of a pale supercilium (the “eyebrow”), its whitish ring around the eye, warm reddish-brown crown and - frankly - by its completely different appearance. 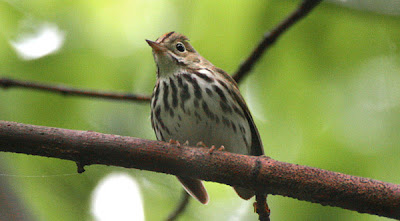 So basically, unless a vagrant Redwing Turdus iliacus from Eurasia is taken into account, a ground-dwelling small song bird that is brown above, pale below with brown stripes and shows a pale supercilium is bound to be a waterthrush.

So far so good, but unfortunately (or fortunately, depending on how much you enjoy a good challenge) this is where easy ends and not-so-easy begins: the identification and separation of the two species of waterthrush... When confronted with a waterthrush, these are the field characters which we have found can be used to distinguish one from the other (field-guides do mention other characters ie Louisiana's buffy supralorals and buffy rear-flanks but in our experience these are difficult to see under normal viewing conditions):

The shape and colour of the eyebrow
Northern Waterthrush: narrowing at the rear and very often yellowish or buffy white.
Louisiana Waterthrush: broad, bold and white, and not narrowing. 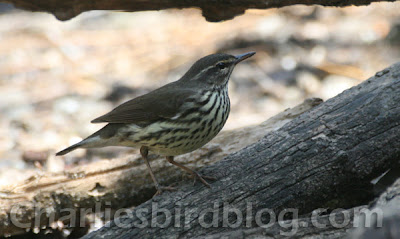 This Northern Waterthrush shows the typical, rather thin supercilium and a long and thin bill. 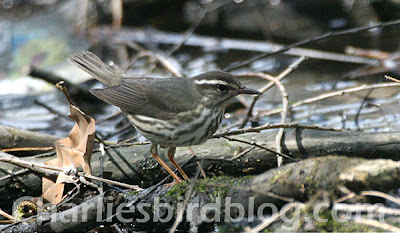 Patterning of the chin/throat
Northern Waterthrush: most birds have a finely striped chin, but some can show a white chin comparable to Louisiana.
Louisiana Waterthrush: always without fine stripes, pure white.

A striped chin therefore is diagnostic for Northern Waterthrush, but an unstriped chin cannot be used to definitely identify a bird as Louisiana Waterthrush! 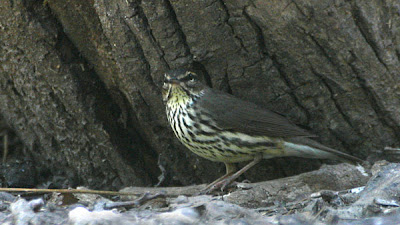 The chin of most Northern Waterthrushes shows very fine streaks 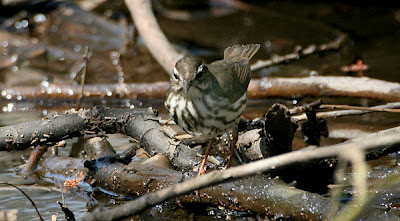 An additional difference that we came to notice but still needs to be tested in the field is the patterning of the stripes on the rear flanks: Louisiana Waterthrushes tend to show two parallel and straight lines along the rear flanks, very nicely patterned as the small individual stripes are completely in line. In Northern Waterthrushes, these lines on the rear flanks still show the individual stripes but they are not parallel but in a pattern reminiscent of a spruce twig, pointing in different directions. There is a considerable amount of individual variation however and this field character will not work on all birds. 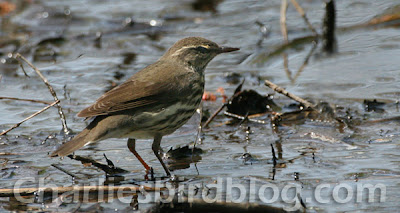 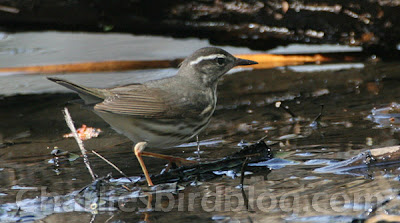 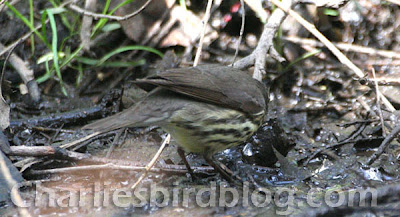 The typically dark, dull pink legs of a Northern Waterthrush are often difficult to see against the usually dark and muddy background of its preferred habitat 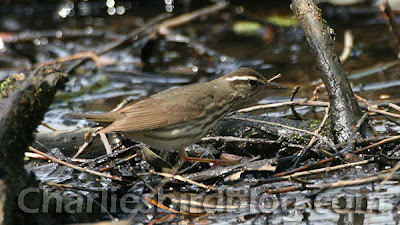 In general, the Northern Waterthrush appears more as a "dull and dirty" bird, with its darker legs, tainted supercilium and often yellowish tinge below. The Louisiana Waterthrush in contrast always gives the impression of a neat, clean and stylish bird, based on its clean white supercilium, bright legs and white colouration of the breast and belly. This difference might not work in all birds, but describes the general appearance quite well as can be seen on the two images below. 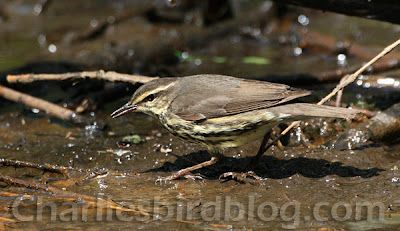 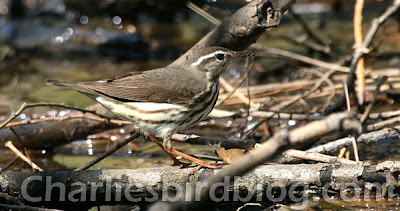 All these field characters are well established and should allow the identification of (almost) all the waterthrushes one encounters. However, most of these field marks are of a relative character and therefore require a certain amount of experience with at least one of the species, most likely to be the more common Northern Waterthrush. How else is one to determine if the bill of a bird is long or longer, if the stripes on the breast and belly of a bird are numerous or less numerous and if a whitish supercilium is bright or obviously bright? Furthermore, some of the field marks mentioned above are subject to individual or geographical variation and not entirely foolproof as rarely single individuals of one species will show a character more typical of the other species.

We would therefore like to introduce here one more field character that might be useful in identifying all individuals, regardless of geographic origin or individual variation as the field mark we present here was shown in other species to be rather stable and reliable. However, this field character cannot be regarded as established because we have only been able to test it on a limited amount of individuals in the field and on photographs of both species we were able to study.

From these limited examinations it appears that the Louisiana Waterthrush shows a primary projection that is significantly longer than that of the Northern Waterthrush. Primary projection is the extent to which the primaries project beyond the tertials on the folded wing of a bird. 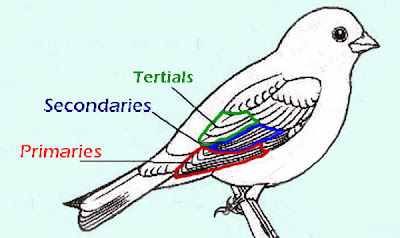 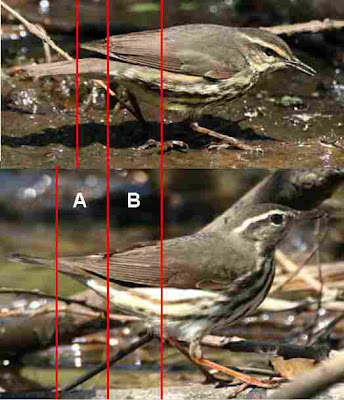 The primary projection [A] of the Northern Waterthrush depicted above is roughly 50-75% the length of the visible tertials [B] whereas it is closer to 100% in the Louisiana Waterthrush seen below.

Summary
The identification of both species of waterthrush appears quite difficult at first but is a rather straight-forward affair in most birds once the following key features are checked:

Due to individual and geographic variation, not all birds show the field characters normally typical for the species and the identification should thus always rest on as many of the field marks mentioned above as possible.

Based on our limited experience with both species, we present one further field character that might be less prone to vary and might facilitate the identification of even the more tricky individuals:

We hope this apparently new but still largely unconfirmed field character inspires birdwatchers in North America to specifically take a deeper interest in the identification of the two species and test our suggestion in the field. We welcome any feed back and opinion on the subject.

Jochen Roeder and Charlie Moores, May 2007

I'm going to have to read this carefully-I recently posted a dark pic of a waterthrush and we weren't sure which one it was.

Great cooperative blogging...how is it a German and an Englishman know more about IDing North American birds than 99% of North Americans?

And you guys forgot one very key way to tell them apart...song (I only mention this because every other aspect of figuring them out is so detailed and complete that it seems a shame to leave that bit out).

Bravo to Jochen and Charlie! Very well done. Any idea on the wintering range of these 2 species? Would it make sense that the Louisiana migrates further due to longer primary projection?

Really great stuff! And awesome pictures. I got all the details necessary to make a distinction between these two tips of birds: Northern Waterthrush and Louisiana Waterthrush.

Yeii !! I have learn something today about birds...I am realy honored to se how much work have you put into these article.


Fееl free to ѕurf to my blog ... internet marketing forums

Early experimental research exploring the impact of violent
video games for wii on children. Credit: University of UtahMedical Xpress Can video games
for wii help patients with several chronic diseases.
Other toy and video-game makers will watch Infinity's fortunes with interest. You learn to map the virtual world.

I just ran across this post as I gear up to study for spring migration and wanted to let you know it is still helping somebody out there! :-)

hey gentlemen. nice piece! how's the primary projection character working out? i just tried it on a photo of what appears (by all marks) to be brazil's first lousisiana waterthrush and it supported my ID. has there been follow up on the use of this mark elsewhere since you posted it? thanks for any feedback.

hello folks. not sure this blog is being maintained anymore, but thought i'd add a couple follow-up comments related to my first entry in march of 2016. our paper on some new bird species for brazil came out not too long ago and cites this blog entry on ID of waterthrushes. in that paper, we try out and further corroborate the primary projection field mark and also mention habitat differences that may work on both breeding and wintering grounds.

anyone can get a pdf of the article directly from this link at the journal's website:

by the way, this blog contacted me automatically because of the new post above, which actually appears to be simply advertising and not related to this blog in any constructive way. did get me to check the blog though.