A Change In Plans

I had this one nice post planned, the one with Yellow-breasted Chats, but somehow due to lots of things to do and a few - gasp - birding adventures, my inspiration to this particular post has somehow left me.
But of course a promise is a promise and here we go, I'll write up a short version of what I had planned:

The Ways We Appreciate Birds

May 2005, my birding trip to Ontario and Michigan, was a decadent warbler fest. Indeed the decadence was so profound that I managed to make contact with 36 species of warblers, either seeing or only hearing (two: Prairie and Worm-eating) all of the Eastern warblers except for Yellow-throated (darn, almost got it, missed by a few hours) and Swainson's, the latter a miss easily excused by the scarcity of records north of southern West Virginia.
Wait, that's a cool sentence:
Most Eastern Warblers were seen North of Southern West Virginia.

Nevertheless, a few of these warblers proved to be quite difficult to find and it was only after a bunch of death marches through Pelee and Rondeau (sometimes on the trails from 5:30 am to 9 pm with no break at all, not even to eat or drink) that royalties like Connecticut Warbler, Kentucky Warbler and Golden-winged Warbler were tucked safely under my belt.

Another one that went down only after putting up a fierce and long fight was the Yellow-breasted Chat.

That was a tough one, indeed.

At Point Pelee it is readily encountered in the thickets around the old cemetery, and scanning these for the Chat was thus the subject of many bird walks through Pelee National Park. Actually, I went there each day during my stay, which adds up to just about a whole week. On some of these walks, I was fortunate to go birding with no one less than John Haselmeyer himself, and it was due to his expertize that on one of the trips we actually heard the Chat. Being the humble and honest man I am (seriously) I have to admit that John heard the Chat, pointed it out and I heard what he meant, but back then couldn't have told it from a Northern Cardinal or an ordinary Texan Fan-tailed Warbler.
So even though John did his best - which is a whole lot of lots - I wasn't really happy about myself and the Chat.

A few days later I went to Ontario's Rondeau Provincial Park. And there, when I was least expecting it (being more ready for Western Tanagers and Fish Crows), I pointed my bins towards a movement low in the trees, saw something big, yellow below, brown above, black-and-white lores, heavy bill, thought "Wow, the Chat!!" and it was gone.
A few moments later, a large brown songbird with round wings and a long tail quickly flew out of a bush and into the same bush again: my second Yellow-breasted Chat.

Man, that felt good, like the first mouthful of cold beer after a summer day's birding.

What a bird, highly appreciated after such a long search.

But isn't it strange though?
Every bird is a fabulous bird and this is especially true for a warbler. So why did I appreciate this one particular warbler so much more than many others that frankly can easily match a Chat in many aspects, like a Blackburnian or a Black-throated Blue?
Because the Chat made me work hard, it played tricks on me, avoided me successfully and finally seeing it was thus much more than just seeing a new bird species, it was a major success!
I had overcome my own incapability and the Chat's wits and seen it. I win!

This seems to be one of the most dominant ways why we appreciate some birds more than others: by the amount of sweat and tears we have to muster to see them.

Two years later, on a foggy May morning at Ohio's Crane Creek. We had just gotten out of the car at the beginning of the boardwalk when the word spread all the way to us that a Chat was currently being seen about 100 metres away. Well, of course we went there immediately, joined the crowd and after maybe a minute's waiting, the Chat hopped by, as seen below in the two snap shots I managed before its disappearance into the thick bush beyond the parking lot. 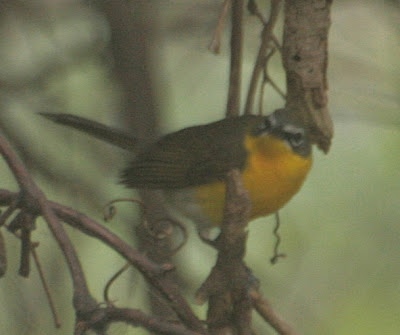 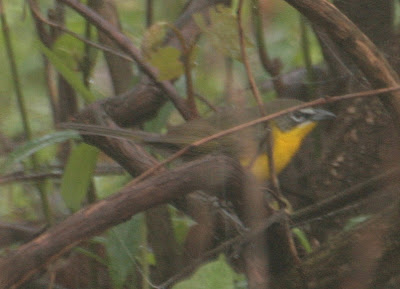 And then something strange happened: surely I was happy about having seen it so well, but basically I wasn't too excited! Or at least not more excited than about any other scarce bird around the Great Lakes.

Because I had seen it before, so there was no victory to achieve, and the looks I had were good but short, so not extraordinary. It was - to sum it up - a nice yet rather normal warbler encounter that left me a happy but not overly excited birder.

Then came the next episode of my Chat encounters, the trip to St. Louis.

This was great: in the course of a single day, I saw a total of 6 Yellow-breasted Chats (in words: six, that's more than 5 and one less than 7, so it is clearly 6 which may not be much when it comes to the flock size of Mosquitoes but is a lot when you're talking Chat).

And by "saw" I don't mean "saw a quick movement in bush" or "caught a glimpse" or "an intriguing and interesting split-second encounter of what was likely..." but I saw them right there, out in the open, sitting on top of bushes, singing away like there was no tomorrow and not minding or avoiding my presence in any way.
Here are a few photos to prove it - and to show I was not bullshipping my readers when I said the mystery bird of the last post was a Chat - and they might still be crappy but they do show a Chat in a small tree out in the open singing along as if there was no ... well, you've read it before, you got the picture, so here are the pics: 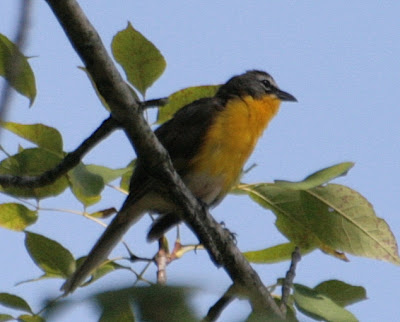 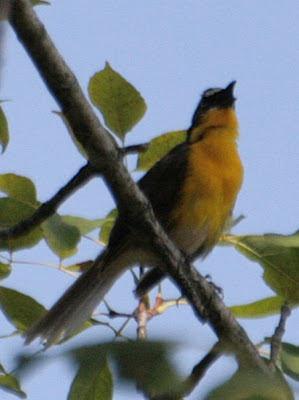 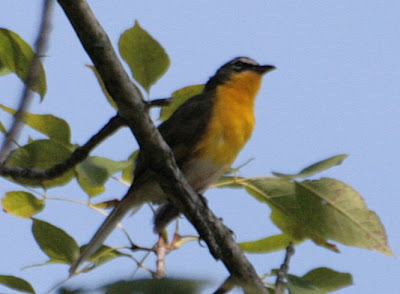 And then all of a sudden, those Chats were very special again, and - looking back now - possibly amongst my most memorable sightings in Missouri.

Yet another reason why we appreciate certain birds more than others:
Getting a decent look at what was so secretive before and finally being able to appreciate the bird for what it is and not for how difficult is was finding it.
Posted by Jochen at 16:58