Bird of the Month: Common Crane

The general as well as the birding public usually has a firm pattern of associations when suddenly confronted with a particular month. I give you a few examples. If I shouted "May", your thoughts would immediately shift to "Warblers!".
"August" - "Shorebirds/Waders!"
"October" - "Hawkwatch!"
"December" - "Gulling the local dump. Wait, I forgot: and Christmas!"

These associations are both individually and geographically variable but some are so dominant and obvious that they can be considered common knowledge. Like the month of October - and let me check my watch... yepp, it's about that time of the year right now - up here in the far North-East of Germany.

October to us is the month of the Common Crane, Grus grus.

As with so many bird species, this area of Germany must rate as one of the best to experience the migration of the Common Crane, which I will simply call "Crane" from now on in this post as it makes for more pleasant reading.
Basically all of the Scandinavian Crane population (and believe me: that's a lot) cross the Baltic Sea from Southern Sweden into this part of Germany to stay here for a few weeks, get fat in a decent way and then move on to the wintering areas of Spain or Morocco.
The largest concentrations can be found within the "Western Pomerania Lagoon Area National Park". Of course that is an awkward name and the German version sounds much nicer, but at least I was able to find a link to wikipedia in English here. I have tried to find other links to the area and its Cranes in English but failed miserably except for this one here, which is pretty useless.
Anyway, no links - more words.
Crane migration usually starts in the last days of September, peaks in late October and then numbers drop until almost all Cranes have left the area in early December. As with other bird species and staging areas, it is a constant coming and going here as some Cranes move on to Spain while others drop in from Sweden. The maximum number roosting here at a given time is around 45,000 in late October. This year is different however in that we have experienced a lot of coming but not much going yet, which translates to an all-time maximum count of 70,000 Cranes right now.
Some may think that's not all too impressive but while this may be true for species like locusts or even European Starlings, 70,000 birds the size of a Bald Eagle are a sight not easily forgotten.

The downside of all this however is that the Cranes are very strongly concentrated in a relatively small area, mostly north of Highway 105 between Stralsund and Ribnitz-Damgarten (in case you want to challenge GoogleEarth) and the West of the island of Rügen.
Other parts of Germany's North-East also get their share of Cranes, but flocks there will only number in the 100's or low 1,000's.
This year, despite the record numbers, I was not able to visit the main Crane areas, yet. This is why I have only a handfull of rather lousy, heavily cropped images.

Here we go, a group of Cranes the way I usually see them - a few hundred each day from my office window: flying high above the city of Stralsund. 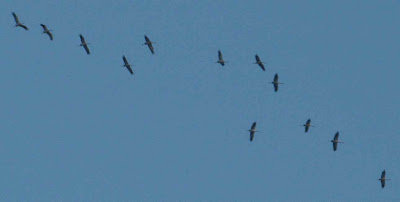 The adults can be recognized by their nicely patterned neck and head: black and white stripes with a red dot on the head.
Neat.
This year's young birds look more like Sandhill Cranes (sweet memories) in that their head is more uniformely rufous or brown. This is quite variable though and this particular young bird here is rather pale.
Still, neat. 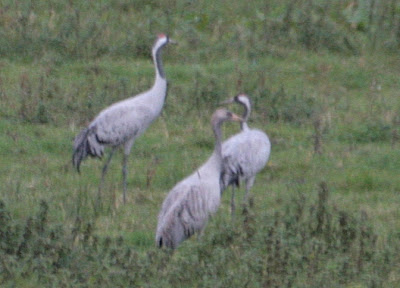 When seen from behind, a Crane's head looks quite appealing, too: 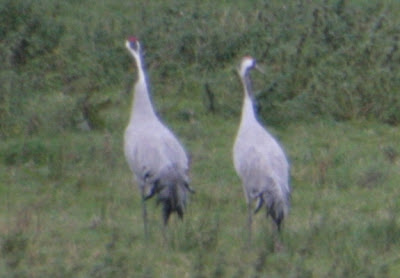 Thinking about it: how much do you think such an image was worth if it was taken in Florida? Surely enough to take me up North and visit Clare, I presume!

The most exciting aspect of these high concentration of Cranes is to scan them for Nearctic or East Asian vagrants and on one lucky morning this year, I was fortunate enough to find a flock of 15 species right in downtown Stralsund. Here's the photographic proof: 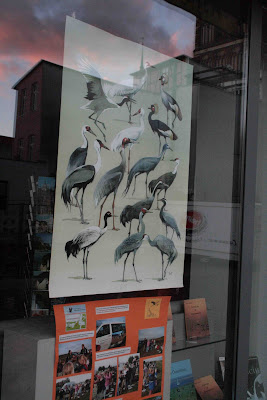 Well, I might have just been kidding you. No, as a matter of fact, this migration corridor is so far off the corridors of the Common Crane's North American or Siberian cousins that there has - as far as I know - never been a single record of another species. All the same: Grus grus grus grus grus.
It's okay though. Nothing is perfect, not even Crane migration along the German Baltic sea coast.

Of course it's not all sweet Roses here for the Cranes and although they (and their food supply) are being managed, they also face a few dangers while staging here.
The most recent addition is the new bridge that connects Rügen to the mainland, right here in Stralsund.
This is an image of the bridge a few weeks ago: 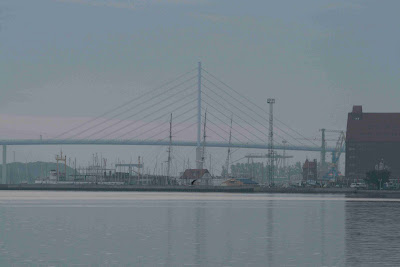 It surely wasn't very friendly of the engineers to put these steel wires up right into a flight corridor of Cranes and in the mind of the general public (okay, make that: the minds of a few birders), the bridge is perceived as and thus called a "Crane Shredder".
Hmmm, of course we all think and hope it won't be too bad but if you have to take care of such a treasure, you don't like to see things like this...

After a few years of construction, the bridge was finally opened to the public last weekend with a huge opening ceremony and celebration. The whole bridge was illuminated and they had something like 30 searchlights that performed all sorts of patterns and movements not unlike a giant laser show. Here's what it looked like, and it was quite a sight for sure: 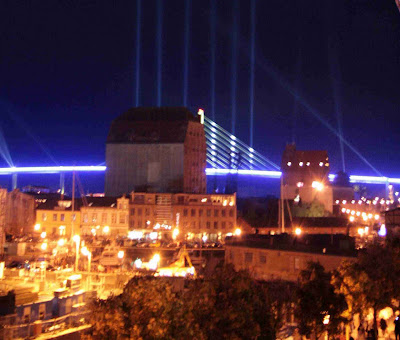 Despite the bridge, Germany is still a country where we take environmental impact assesments seriously and of course, the danger such searchlights might pose during the opening ceremony to migrating birds was accounted for.
To keep those flocks of thrushes and other songbirds from following the lights and colliding with the bridge, they had some huge fireworks to scare them off, and that must have helped for sure.
Here, again, is a little visual impression of the scene: 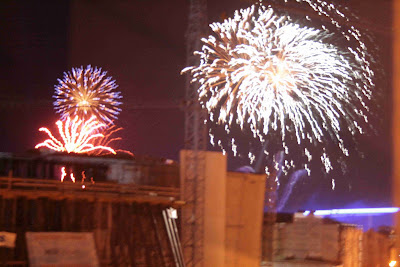 I hope you have enjoyed my little excursion into the migration of the truly Common Crane through my home patch.
It's early morning now, the sky is pink, I am at the office and the first flocks should soon arrive over the city, heading south towards their feeding grounds.
Therefore, no more blogging for now: I am off to do some office birding!
Posted by Jochen at 08:09

Glad to see you back on the air. I enjoyed reading your first two items from Germany.

Are you still using the yahoo email address?