In an age of re-inventions, I have decided to add another aspect to my bird blog, and as a matter of fact, it's all about building metaphoric bridges and tearing down language barriers, so it's a culture thing.
I thought it would be neat to use birds and birding to introduce my inclined readers to the fine art of speaking German. Of course I am not going to teach you German bird names (who needs them but us Germans, and the Swiss, and the people from Austria, and a handful of people in Namibia).
You are also unlikely to learn here how to politely ask for the rest room in a German restaurant (but now that you're wondering: we're rather direct. "Wo ist die Toilette bitte?" Where's the toilet please?).

Instead, it's all going to be about some typical German proverbs and the things we say that don't make sense but are in wide use anyway.

How often have you been scratched and bitten when you walked outside while it was raining cats and dogs?

You see, that's the kind of thing I am going to tell you about.

Like the word "Hammer" which translates to - and this will be difficult to memorize - hammer.
We like a good hammer once in a while here in Germany.
Certainly this might pertain to the old Germanic god and avid craftsman Thor and as such would make for a cool story, but I am afraid it has nothing to do with it. Hammer is just a cool word, and that's all there is to it.

We use it in a variety of situations:

Hammerhart - "hammer hard" or "as hard as a hammer" is used when something is really hard to do (and not hard as in not-soft).
Hammer used by itself means "amazing".
And when we say something was "the absolute hammer", it was something that completely blew our mind and knocked us off our feet.


It is now official, and this is how the birding part begins: Geese don't like me this year.
They really don't.
I have no idea why this is the case, but they do all they can - and quite successfully as well - to avoid being seen by me. I mean, I do see them reasonably well from a distance. Like during the morning of last Monday when my job assignment was to record their daily flight path over the small city of Wolgast. 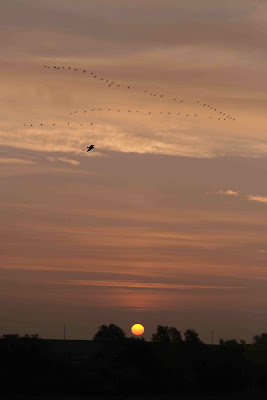 This was quite a nice morning thanks to the geese, although that particular morning was so cold that my kidneys still hurt somewhat today.
But then I set out to follow them to their feeding areas, to count them and scan their flocks for rarer species. Here along the Baltic and amongst the Anser geese, we have Greylag, Greater White-fronted, Tundra and Taiga Bean Geese on a regular basis. If you get a chance to scan through a few 1,000 you are likely to find a Pink-footed Goose as well, and if you are extremely lucky or show extreme endurance, you might find a Lesser White-fronted Goose, with the latter not having come my way yet. Not really at least. But to find these two rarer species, you've got to get decent looks at the flock, so it shouldn't be too distant and a free view is desirable.

And this latter aspect, the distance and the unobscured view, are just not working this year.

This below was the only "flock" I found that was close enough and out in the open enough to potentially allow me to find one of the rarer species. But at a flock size of less than 100 birds, it was no use anyway. Still, it contained all of the 4 regular forms, so I was not completely frustrated. 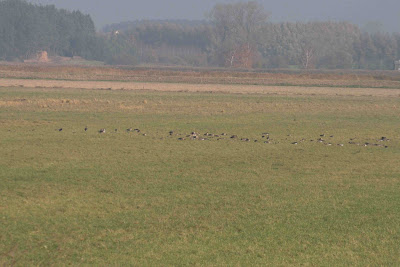 Finally I found a somewhat larger flock of possibly 2,000 to 3,000 birds. This flock can be seen here if you take my word for it. 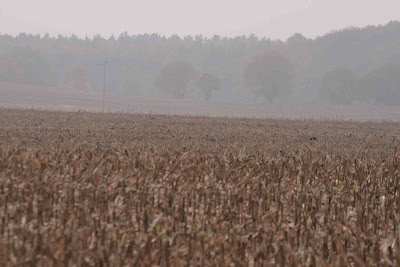 For some reason that might make sense when you're a farmer but is a nightmare when you're a birder, the farmers this year cut the corn stems quite high above the ground during their harvest. The geese still like it, obviously.
But you don't even want to know what I think about this!
Thanks, guys!


I then remembered the lessons I learned in North America: go for songbirds!!
And so I did.

And I liked it very, very much more.

Let me demonstrate to you why:

On the way up to the Northern tip of the island of Usedom, still in a desperate attempt at finding a few identifyable or even countable goose flocks, I came across a small group of songbirds feeding right besides the road.
I stopped the car around 50 metres away and looked at them through the windshield.

Nice! A small flock of 8 Twite, or is it Twites? Anyway, of 8 Scandinavian birds that are not rare here in winter but still uncommon enough to appreciate every single sighting. Of course I wanted to take some pictures for the blog, but they were too far away and seemed to flighty to be approached any closer. Then came another car that passed me, flushed the group and guess what happened?
Had it been geese, I am sure they would have flown all the way to the Netherlands.
But these were - YES!! - songbirds, so they were flushed, flew around a bit and landed ... right besides my car!
So here they are, my pictures of the brilliant Twite: brown and plain, yet neat! 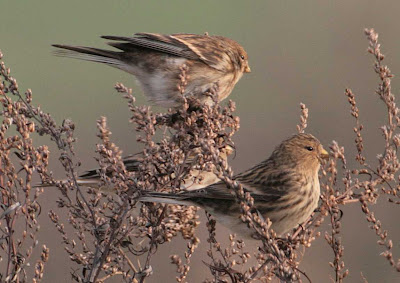 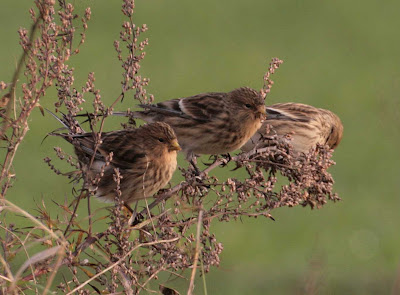 The neatest thing about those brown jobs is their rosy butt in breeding plumage. When they are here in winter, they mostly don't show this unexpected addition of colour to a somewhat drab
appearance. I have actually only seen it maybe three or four times in all those years, so the bird on the right of this picture below was hailed with exaltation. 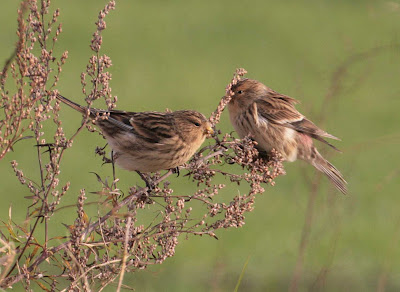 I then decided to spend my lunch break at the beach and in the pine forests of Peenemünde, where I had been a few days before with Hendrik and Corey.
This is the beach at Peenemünde, a good spot for watching shorebirds/waders, gulls and terns. 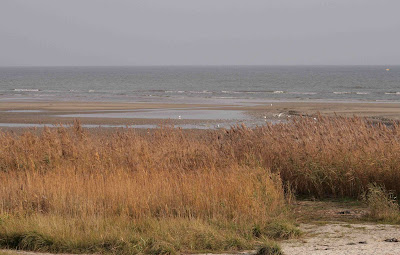 Despite the extensive mud flats, there was nothing to be seen but Herring Gulls and Black-headed Gulls. The most exciting sight therefore was of two nutcases with suicidal tendencies who were looking for amber along the beach. 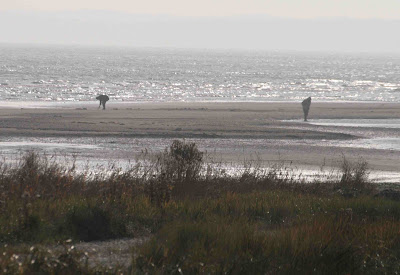 Amber in itself is a nice thing to find. But then, the word Peenemünde might ring a bell or two, and indeed, it is the very same Peenemünde where the Nazis built their V1 and V2 rockets, a place that was subsequently very heavily bombed during the war.
Quite a few of those bombs were accidentally dropped into the Baltic just off the coast of Peenemünde and some of these bombs contained phosphorus. So every once in a great while, one of those old bombs breaks open, the phosphorus escapes its rotten tomb and gets washed ashore, just to be picked up by some naive amber searchers who all of a sudden find their jackets or pants on fire after the phosphorus is ignited by their body heat!
Honestly, Peenemünde must be the last place on earth anyone should go looking for amber.

Expecting to see more birds away from shore, I ventured into the pine forest. 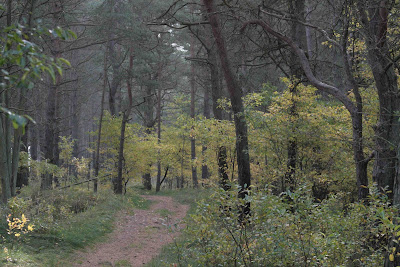 And as this was not goose habitat but the realms of songbirds, my expectations were exceeded.
Certainly I didn't find any Siberian vagrants, but a mixed flock of Great, Blue, Marsh, Coal and Crested Tits, Treecreeper, Nuthatch, Great Spotted Woodpecker and Goldcrests were a pleasant sight. Of course the light was lousy and this shot of a Crested Tit was the best I achieved, but it was still better than trying to spot a goose among a sea of corn stems. 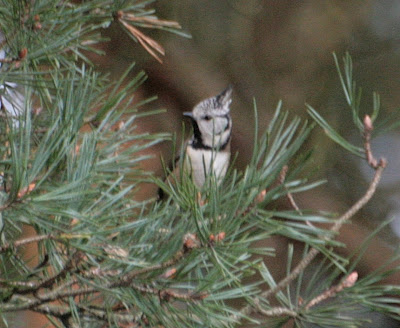 Every lunch break comes to an end eventually and I ventured out again to search for more geese.
Ha, ha, very funny, I know, but I had to try, it was my job assignment after all.

And then something remarkable happened, although I don't really have a picture to come along with the story, and this will bring us back to the hammer aspect of the introduction to this post.
I drove by a small sandy field on a hill, a field that often held roosting songbirds in the past few years and was frequently checked by me for some special species. Of course, I never saw anything special there during the 20 or so visits, so I wasn't really expecting anything while I scanned through the skylarks, linnets, meadow pipits and corn buntings that hopped around on the ground. Here you can see the field with a skylark in the centre of the picture. 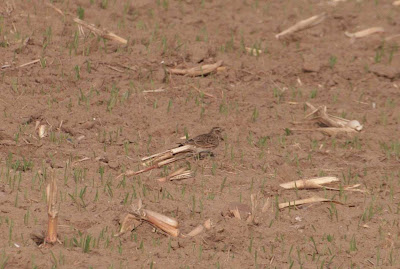 And then all of a sudden, this one particular bird hopped into view. It took me a second to identify but about two hours to comprehend: I was looking at a Little Bunting!

Now, this was the absolute hammer!!

The Little Bunting is a Northern species that breeds right across Siberia and reaches West into Northern Finland, with a few pairs in the far North of Norway and possibly Sweden. It is quite uncommon though in Scandinavia and as it migrates to South-East Asia, it must be considered a vagrant to the rest of Europe. However, it is one of the more regular vagrants to Germany, with roughly 5 sightings or so each year, but of course these sightings occur mainly on the off-shore islands along the North Sea coast, mostly Heligoland which must surely rate as one of Europe's best birding places.
But seeing a Little Bunting on some field in the "Hinterland" was completely amazing and unexpected, like seeing an Asian Phylloscopus warbler not on some island off Alaska but a hedge row in a backyard of Washington or Oregon.

As it was getting late and the light started to fade, I decided to call it a day (and what a way it was to end a day's birding) and drive back home to Stralsund, but of course not before I had checked the parking lot of a nearby shopping mall for the Bohemian Waxwings that had been recorded there for the past few days.
Sure enough (the songbirds delivered), they were there. And even though the light was lousy and the ISOs high, I enjoyed watching them and even took a few pictures.

I really like songbirds, I honestly do. I also like watching geese, but if they don't comply, I'll always be happy with finding a Siberian vagrant and watching Twite and Waxwing instead.

Good things come to those who bird. 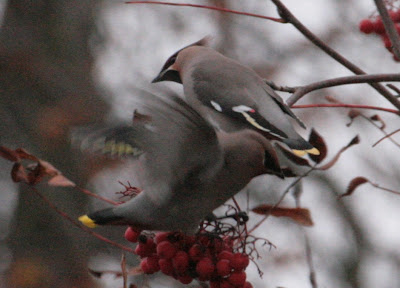 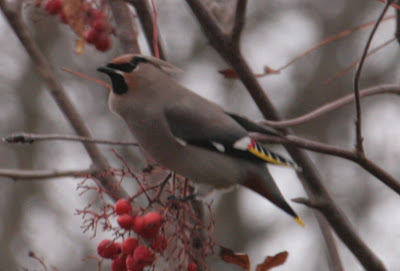 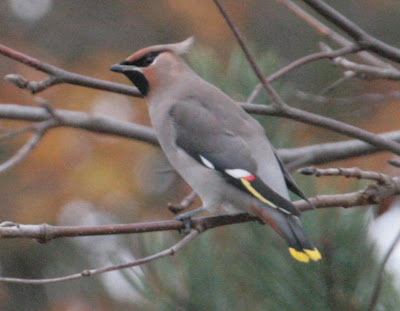 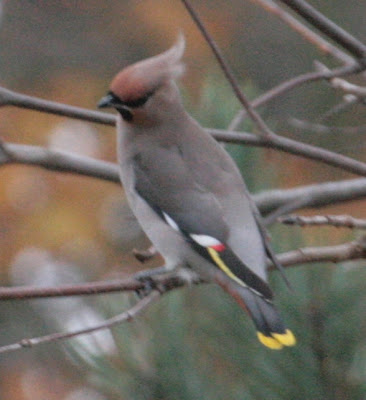 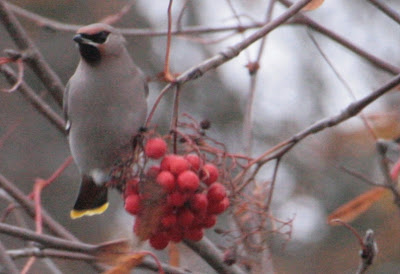 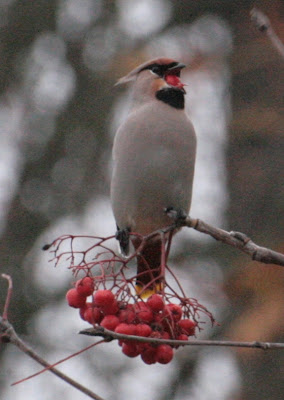 Little Bunting? You're my hero Jochen, of that there is no doubt...congrats

Thanks, Charlie!
It was truly amazing for sure!
I also saw something else that day, about which I might blog today or next Monday. Hope you'll still call me a "hero" then ... ;))

As always, Jochen, your writing is the absolute hammer.

Thanks Mike, that's very kind. Or is it that you REALLY want to see a Black Woodpecker once you make it up to the German Baltic coast? ;-))