Friday was grand as I finally got some first-hand, original, out-for-real birding done and can actually write a post in “been-there-seen-that” mode instead of just making strange things up while searching through my photo archives.

Wait, sentence reconsidered, make that: “could actually write...” as currently, time for blogging is hard to find between my worshipping the bosses’ whip and avoiding the daily dangers of the dreadful diaper of death (which, incidentally, you already knew I guess). I’ll see, possibly there’ll soon be a post about me actually getting some birding done. I sure hope so and you may take this as fair warning. Here's one of the pictures I took. 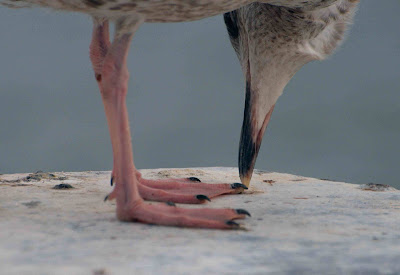 A gull gal sure likes her bit of pedicure

In the meantime, a short notice on my little son LBJ, now heading towards finishing his third month on planet earth and having loved every minute so far - kind of.

Coming home last Friday, my wife told me in a flat matter-of-fact tone that apparently LBJ was no birder.
Imagine the horror.

She had played a CD containing bird songs to him (“Nature Sounds” by a German drugstore chain) and he had started to cry and wail instantly.

“Oh dear”, I thought, “all my hopes and dreams vanished like smoke in a breeze”. But then the investigating side of me took hold of my actions and I inspected the CD’s content.

The result is a glimmer of hope: LBJ is either no birder or is already the best birder ever!

The bird concert on the CD is a mixture of three species, and remember this is a CD bought and played in Germany. It sounded so familiar and thus took me a few seconds to notice (apparently longer than it had taken LBJ), but the bird species on the CD are ...

None of these are anywhere near the normal European avifauna and apart from the Robin, I don’t even think the species have even turned up as vagrants in Germany.

So LBJ possibly got all excited about finding 2 “firsts” for Germany, then grew suspicious as this was so unlikely, and then noticed that this was no continuous chorus of the birds’ song but a monotonous repetition of the same few short phrases, so clearly he was being fooled and a recording was being played to him.

And being the serious birder he is, this clearly ticked him off in a big way!

I sure can’t blame him and hope this explanation holds true in contrast to the alternative hypothesis, that he just doesn't like the sound of birds singing ...

Well what serious birder wouldn't be bothered by such unnatural nature sounds?

LBJ is sounds like he's well on his way to becoming a sick depraved birder, er, an accomplished naturalist...

Yeah, until he moves to a big city and starts READING on his train rides to work, right?!

yeah, all these recorded things are hard believe. Last week I watched "the Bourne Identity", pressured by my girl friend who thinks this is a great movie.

Action is in a prairie, in the south of France (remember, this is an important detail). Matt Damon, equiped of a Shotgun, is looking for something. Possibly, he is the kind of old generation of bird collectors...

and suddenly, a miracle happen. An eastern Wood pewee start to sing. Impressed by the exceptional presence of this american vagrant, he stops, and listen carefully. The yankee flycatcher sings another time, then a third time.

inexplicably, he goes the wrong direction, and starts to shoot at another little punk with a shot gun too.

Bad movie, or maybe he wanted to have the exclusivity of the discovery?

I'm glad to hear that there is another nature nut out there trying to turn his kid into a birding before they can even talk. My son is now a year and we do a lot of birding watching together. My 4 year old daughter already knows many bird species and she'll point out any new birds hanging out at the feeder. I figure we start them early and they'll be better birders than we are by the time they hit 12!

How completely refreshing to come across a serious birder with a sense of humor about it! And I like your pictures with or without twigs too.

Oh, I love this picture! I came in from Larry's site (Brownstone), but BruceSC told me I should look at your site, too. Really terrific. I'll be back!