In the News: Well-known Blogger botches up and misses his chance to rake in US $ 50,000

Okay, these things can easily happen. It's happened to me a few times, and if you are a birder, it has more than likely happened to you as well:
We miss out on a grand once-in-a-lifetime birding chance, or rather: we mess up bird-wise despite being at the right place at the right time.
Most of the time, we won't notice, e.g. we simply don't see our ultimate nemesis bird sitting right behind us out in the open while we are fully concentrated on scanning the landscape in front of us for said nemesis bird. So the frustration is limited to having just had another fruitless attempt at getting a nemesis as we will never know just how incredibly close we actually were.
Sometimes however, and more and more frequently in an age of endless photographic possibilities, we learn afterwards what we had missed out in the field and the disappointment is heart-breaking.
Yes, I see you need an example to understand what I mean.
Surely many of us will recognize this situation:
You show some slides (wait, make that a power point presentation) from your last birding holiday to a few birding pals of yours and all they do is constantly point out birds in the background of your pictures, birds you hadn't noticed out in the field when photographing the bird in front. This in itself is nice, but it will downright kill you if these background birds are the lifers you wanted to get so desperately on that holiday but had missed - so you thought.
The knowledge of having missed those birds through sheer ... well ... not-being-focussedness, through a birding mistake instead of just never having actually been close to one, is one of the most frustrating emotions I have ever experienced in birding.
Luckily though, I was the guy who pointed out the birds, so I have experienced it passively, so to speak.
[This has really happened to me: I showed my friend two "missed lifers" on his holiday slides, Citrine Wagtail while he took pics of a Reef Heron and Spanish Sparrow in his picture of a White Stork's nest. I can't say I enjoyed it, but it was a noteworthy evening].
Aaaanyway. So this can be extremely frustrating. But what would you say and feel if you not only messed up a chance to get a lifer but if this lifer was worth US $ 50,000?

But hey, I know someone we can ask:

Hello Nate, my friend!
Are you with us tonight?

So, there you were in the Carolinas (crowd holds breath),
in March (part of the crowd starts murmuring),
in a swamp forest (murmuring gets considerably louder)
and you took this photograph [reproduced here with your kind permission] ... 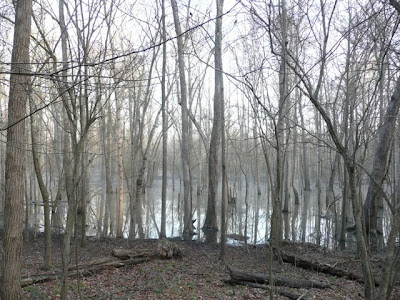 ... without noticing that you had just flushed a large black-and-white woodpecker off the far site of a trunk?
(crowd explodes!) 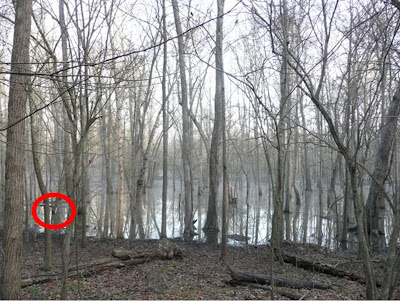 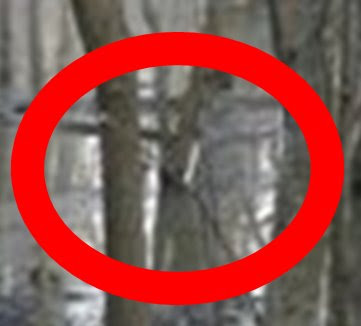 
Haven't you seen something like this before, somewhere on the internet?

So tell our valued readers, Nate, how does it feel?

How could I have missed it? In this economy I can't afford not to fake an Ivory-bill photo...

It's not too late! Turn that photo in...you'll be rich, rich I says!

Or maybe Jochen is going a bit crazy from lack of sleep and/or birding...

Woo-hoo. I'll pack up the car and be heading down to follow up on this amazing sighting.

I'm going back through all my old photos ASAP.

Funny I think I have the same one on a michigan picture.....Ivory Bill in the Arb!!!!

Well, guys, how about the following news headline:
"Lesser Well-known Blogger botches up and misses his chance to rake in US $ 50,000 by telling the world where to do a follow-up search before he gets a chance to go there himself"