Tit for Tat, only it's not a Tit

Yes, as shameful as it may appear in an age of disappearing biodiversity and increasing problems with invasive species, a rarity or vagrant spotted once in a while amongst the flocks of our common birds is the "salt in the soup" as the Germans would phrase it, or ... geez, wait ... I don't know, ... the whatever in the whatever it is that the English would use to describe the one component of the birding lot that makes it all worthwhile.

North American vagrants can be as easy to find in the UK's autumn season as sand in your shoes after a day on the beach (but are far more pleasant than that). Finding a European bird along the Atlantic coast of North America however is no easy task but a big event of national dimensions.
This difference is not all too surprising as it can be explained easily with migration patterns and autumn storms.

However, and to the best of my knowledge, no North American species has established a pattern of regular occurrence in Europe, let alone a breeding population, even though dozens of individuals of dozens of species are storm driven to the UK and France each year. When Ring-billed Gulls started to hit European west coasts in masses each winter in the 1980ies (roughly around that time anyway), everyone thought they'd soon start to breed.
Again to the best of my knowledge, that still hasn't happened.
The Scottish Spotted Sandpipers? Well, that was one pair, one year a long time ago (in 1975), it was an unsuccessful attempt and the birds never came back. Nothing even remotely resembling the establishing of a breeding population.

In North America the picture is a completely different one: Little and Black-headed Gulls have quickly established themselves as breeding birds on the New Continent and the Lesser Black-backed is soon to follow, if it isn't breeding regularly already.

So the score is 3 : 0 at the least (Northern Wheat-ear? Eurasian Teal?), a bit of an uneven score if you ask me.

Now finally, the North American avifauna has given us in Europe a Tit for our multitude of Tats. And it is thanks to one man on a mission that we know of it.

Jens Hering, a German birdwatcher with a strong and respectable scientific touch from Saxonia, has spent a few summer seasons on the Azores, a small group of islands out in the central North Atlantic that are politically part of Portugal and biogeographically part of the Western Palearctic region, so have nothing to do whatsoever with North America. All ours.

The Azores have gained a lot of fame in European birding circles recently as a sure-fire destination for finding heaps and masses of Nearctic/North American vagrants in autumn, especially after a few decent October storms.
Very few people visit the Azores during the breeding season as most of the species breeding there can also be seen during the Nearctic Twitches in autumn or elsewhere year-round in the Western Palearctic.

In June 2008, he was able to observe several Black Ducks, yeah Black Ducks, on a small pond on the island of Flores, one of the westernmost islands of the archipelago. After much effort time-wise and physically, he was able to photograph a female Black Duck on that pond which was being followed by three ducklings aged between 14 and 20 days! Several drake Black Ducks were also in the vicinity.
His amazing find was published in the German birding magazine Limicola:

Black Ducks had been seen on Flores for quite a few years already before his breeding record, and especially the observations from 1998 and 2000 strongly suggested a successful breeding in those respective years there as well as the birds seen included not only adults but also young birds in their first year. However, as these young birds were observed in late summer and were perfectly able to fly, they did not constitute a definitive breeding record for Flores as it was quite possible they were wind-driven vagrants from North America in much the same way as the accompanying adults were.
Jens Hering now finally managed to provide the proof everyone expected but never managed for so long!

This breeding record of the American Black Duck on the Azores seems to represent - yet again but for the last time in this post: to the best of my knowledge - the first incident ever of a North American bird species establishing what is likely a stable breeding population on the other side of the Atlantic.

By a duck.
Not a sandpiper, not a gull, not a hummingbird or motmot - nope, a mighty duck.
Quack!


A little addendum some might find interesting:
As soon as he had found the breeding Black Ducks, he was faced with a tough identification challenge.
As we all know, there are three species of Black Duck on this planet, one in North America, one on the west side of the Pacific and one in Africa. With the Azores Black Ducks clearly being vagrants, anything was possible so the intrepid discoverer had to establish if those Duckies were of African or North American origin. The Pacific option was simply too far off to be worth considering.
The identification of the BD's as being American was quickly done however when one of the birds stretched its wing to expose (I am sure on purpose) the diagnostic wing pattern.
I have summarized their identification in the image below for the two most typical/representative subspecies. 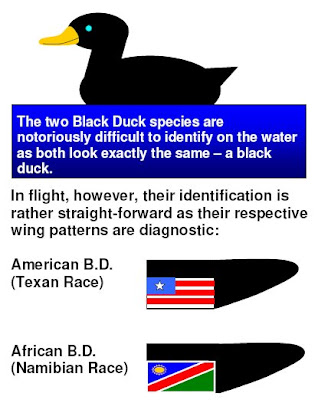 Now, the alert-minded reader will not fail to notice that there can't be a Texan race of the American Black Duck as it is not known to breed or even occur regularly in that state.

Good point, indeed.
But wrong point.
So where's the good in it? No idea, I just didn't want to appear rude.

Well, you see, I have conducted my own bit of research and established beyond scientific doubt that there is an as yet undocumented population of Black Ducks in the swamps of the "Big Thicket" in far eastern Texas. When seen in flight, the Texan Black Duck's secondaries appear white from above (with the white stripes overshadowing the red ones) and the underwing is largely white as well as in all other forms of Black Duck. The Texan population lives along wooded oxbow lakes and bayous, likes to perch behind tree trunks and is really hard to photograph unless a birder's attention is drawn to it by the nasal Red-breasted Nuthatch-like calls that are so unique to that subspecies.

A final thought on the breeding record though: how can we know for sure the young ducklings really hatched on the Azores? When they were observed swimming around in the small pond on Flores with their mom, they were between 14 and 20 days old, and we all know that ducklings can swim right after hatching.

Now, if the ducklings hatched at the nearest North American breeding site in Newfoundland, a mere 1,938 km away, and swam towards Flores, they would only have had to swim between 97 and 138 km per day, which translates to a speed of only 4 to 5.75 km/hour.

I am pretty confident ducklings are capable of that.

Even when an American bird finally comes over it is pretty much the least colorful duck we have.

I am starting to work on a theory that the Western Palearctic region actually repels color somehow...I just need to figure out the actual mechanics of how it happens. I smell a nobel prize in my future though, especially if I can release the colorful "inner bird" in all of your warblers.

I'm sure one could find an even less colorful North American bird for a first breeder. After all, black ducks at least have that lovely purple speculum and bright yellow bill. I'm thinking something along the lines of a chimney swift.

There is an English idiom that "variety is the spice of life." That might be the culinary analogy you're looking for.

Prof Jochen, do you suspect there to be a separate race and distinct breeding center of the African Black Duck in Namibia as well? For Namibia being a barren land and the ABD generally being a forest stream loving species, would that mean that we might expect the namibian race to have other habitat requirements or preferences?

Maybe we can put together an exploratory expedition?

Here is where not to look:
http://sabap2.adu.org.za/species_maps.php?Spp=95

John:
Chimney Swifts? Well, they'd fit in pretty snugly. I am sure no one would notice they were non-European birds. And thanks for the English idiom, these aspects of a foreign language are hardest to grasp.

Dale:
You're kidding, ey? Surely you are aware that I spent a total amount of 2 years in southern Africa, mostly in Namibia doing field work for my Master's thesis on the Ecology of the Mountain Zebra along the Fish River Canyon?
And guess what: the only duck along the Fish (or what remains of it after the rush of the rains has gone) was the ABD!

More a bird of barren, rocky and sandy stretches within narrow canyons of deser rivers. Single tamarisks and small patches of reeds (a few square metres at most) are tolerated but do not constitute a vital or preferred part of the species' habitat.

I might, however, forget all this if it means we can get someone to sponsor an exploratory expedition.