The Splitting of Birds

Taxonomy is an intricate, complex and often weird business that usually fills birders, or at least the keen listers amongst them, with no insignificant amount of joy nowadays, as taxonomy has more and more evolved into the Fine Art of Splitting Birds.

In other words, what was regarded as a single species with distinct subspecies or subpopulations in the past is now often re-evaluated as comprising two factual species.

If you've never seen any of the forms involved, you'll neutrally acknowledge the split.
If you've seen one of the two forms, it won't change anything which means no benefit but also no harm done.
If you've seen both forms, let the corks pop, you have an "arm-chair tick"!

However, we mustn't forget that all armchair-ticks come at a price, and that this price may seriously jeopardize our joy of watching birds. As a constant reminder, let us look at the recent taxonomic history of the Herring Gull, Larus argentatus:

Once upon a time, not so very long ago, all silvery-backed large white-headed and -tailed Gulls of the northern hemisphere were called Herring Gulls. The bird below, photographed on the Baltic Sea shores of Germany recently, is a fine example of this magnificent species. 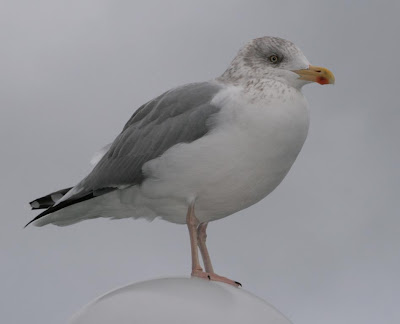 Herring Gull during the Golden Age of the species

However, European researchers soon realized that the Mediterranean and central Asian populations were indeed not of the same species and the Herring Gull was split. We'll neglect the taxonomic fate of the Mediterranean and central Asian forms for now and focus on the remainder, the Herring Gull that was now confined to the shores of Northern Europe and large parts of North America. This bird, depicted below, was surely still majestic but had somehow lost a significant part of its former glamour. 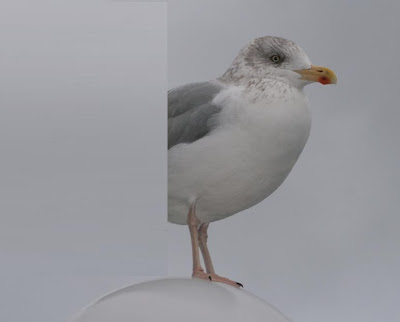 As if losing the lush dumps of the south hadn't already been a severe blow to the poor Herring Gull, more bad news came in form of a genetic comparison of the remaining populations in North America and the Old Europe: turns out both forms of what was presumed the same species aren't even each other's closest relative, so another splitting event was due and the Herring Gull lost a significant part of its kingdom again, confining it to the cold and often miserable northern part of Europe. The sorry remains of what was once a shining regent of an Empire can be seen below. 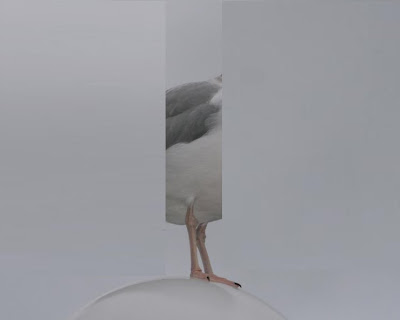 Crippled by taxonomy, a European Herring Gull would love to look at a brighter future ahead but fails due to losing its head

Now, firm supporters of progressive taxonomy might point out that the remaining European Herring Gulls can be separated into two forms, the south-western subspecies argenteus and the Baltic and Scandinavian form argentatus and that both forms differ significantly in many, many ways (that might one day be analysed here or on Birder Hyde, we'll see).

I would like to urge these birders to be cautious and considerate.

If we keep on splitting the Herring Gull, we might one day realize that there is nothing left for us to watch and enjoy! 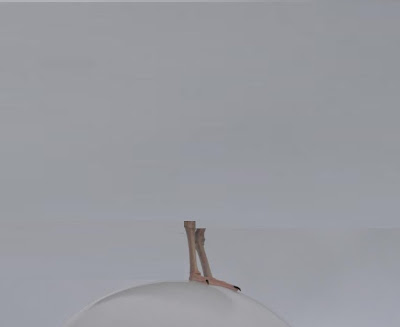 Clearly Gone, for another "X" on a birder's list

I am dreading the potential split of the Red Crossbill. Lots of research has been done on their call notes, bills, and other traits. I've heard numbers like 8 or 9 different species. Yikes!

@Patrick, all they have to do is split off their bills, then we won't have to worry about their call notes anymore!
I wouldn't dread the split though: I guess it will soon be standard for a birder to carry a recording device around in the field to record and analyse flight calls. The generation of birders we are currently raising (any news from Corey, Daisy and Shearwater?) will surely take a recording devise as much for granted as we do a pair of binoculars and I also suppose these things will get cheaper and more efficient in the very near future.


On my side, I am hopping for lumps, rather than splits. That's the only way I could get closer from the competition without seeing some new birds....Let's lump all the gulls into a single species, so we don't have to worry about these guys anymore!

I was going to suggest using a carving knife to split the birds, but cropping works, too.

It would really help me if the Thayer's Gull got merged with the American Herring Gull. That way I wouldn't have to worry about finding one anymore.

With which other species would you merge the ivory gull, then?

@Laurent: if you want to get ahead in a competitive way, the problem is that any lump will likely also get your competitors ahead, so it won't help you much.
Regarding taxonomic changes, I suggest the following cascade:
Split - Slice - Shred

@John and Laurent): careful about lumping gulls. In the end, the Ivory Gull will be merged with the white form of the domestic Pigeon, and we certainly don't want that to happen, or do we??

Maybe if you take the crossbill's bill, the legs of whichever Herring Gull lost them and combine them...all we need is a body. I'm sure there is one somewhere in the East River. Now we can have a new species. I'm now sure if that qualifies for sympatric species-maybe sympathetic speciation would be a better term.

In other words, what was regarded as a single species with distinct subspecies or subpopulations in the past is now often re-evaluated as comprising two factual species.
stitching price list
ladies kurti stitching