Some may remember that I spent two weeks in Tirol (that's part of the Austrian Alps) last January.
On one of the finer days of this trip, I teamed up with Dale (or rather he took the risk of meeting me) to do some very fine birding after Dale was able to shake off his job duties Friday afternoon.

We drove up, up, up into the mountains to the small village of Kühtai, at a height of approximately 2,000 m above sea level (around 6,000 feet), for two reasons:
1) We were to attend the first international Austrian-German bird blogger convention.
It turned out to be the most successful bird blogger convention ever, anywhere, as definitely 100% of all the bird bloggers of Germany and Austria attended. A picture of the entire delegation (the complete German and Austrian bird blogger scene) and a few more details can be found here (yes, I had a good reason for looking that tired - check the comments there).
2) Dale wanted me to see Snowfinches. And I wanted me to see Snowfinches just as bad.

Snowfinches are a species of birds related to Sparrows of the Old World kind (yes, North America, rub it in some: here, we have some issues with common names not meeting taxonomic standards, too), and they occur up, up, up, in the highest mountains of Europe and central Asia. To give you a rough idea how much up I am talking about: they move down quite some ways in winter, and we were there in winter, and we were up at 2,000 m above sea level.
That's up.
I had seen Snowfinches twice before in the Alps, once in July or August of 1987 when a handful of birds quickly flew away from me somewhere around Switzerland's Matterhorn, and in February (or January?) of 1997 in the German Allgäu, where a small flock of around 5 birds would regularly fly away from me whenever I turned up at the peak of the Fellhorn during a week's trip there.
Yes, I wanted some better looks.
The first Snowfinch we saw at Kühtai ... er ... kind of flew away from me, so it seems it's some sort of a tradition thing. But then a few birds landed at a feeder nearby, and then more and more birds showed up, and then I got some amazing looks at the birds sitting, and then hopping, and then flying. Yes, away from me again, but also towards me, around me, and above me. Not below me, but one always ought to leave out one thing in order to have a reason for coming back, so I was fine with that.
And then I took some pictures: 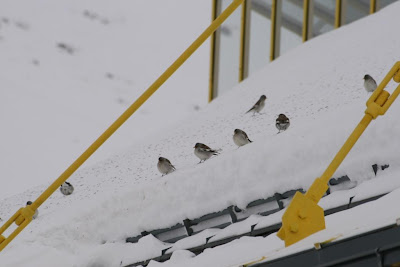 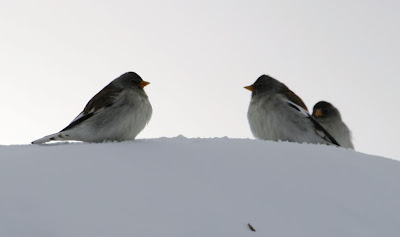 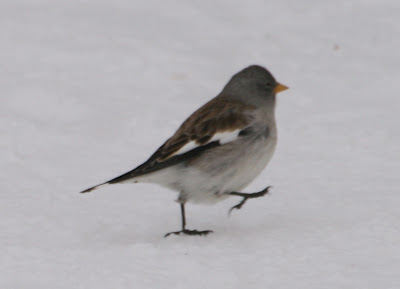 The marching bird.
I've never seen birds with such determined walking gaits. Not as goofy as the Ovenbird, but surely with a comparable mindset. 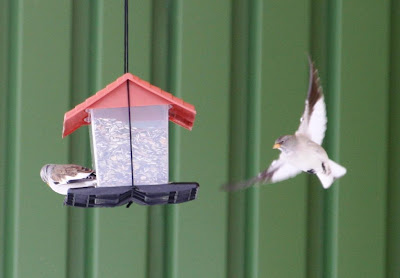 The Underdogs' feeding frenzy below the feeder. 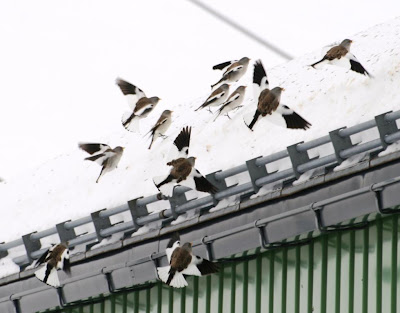 And now the Eye Candy: the flock in flight.

We were there on a cloudy day, and the sky was as pale and uniformly white as the snow on the surrounding mountain slopes.

But for viewing Snowfinches, this is perfect weather.

Against a white sky (or snow) the white in the birds' wings and tails merges in perfectly with the background and the Snowfinch has thus one of the most peculiar flight silhouettes I have ever seen (well, have ever partially not seen).

The following two heavily cropped images may convey part of it, but it is so astounding it needs to be seen in life to be appreciated. 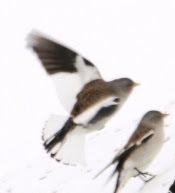 Those are very pretty birds. The upperwing pattern reminds me a bit of snow buntings.

brilliant! I love snowfinches, and it was great sharing them with you.

Ah, you got to see your finches. I tried to see the rosy-finches in Albuquerque and had to turn back due to snow on the road to where they were.

You got some great pictures there Jochen. It is always exciting to find a species one has been looking for.

I cannot believe the amount of people attending the conference. A terrific turnout!!

The trip to Kruger was awesome and the braai and sundowner even better. :)

@Dale: thanks! I am looking forward to birding with you again, it was a PLEASURE!

@Wren: that's so unfortunate! So I guess you'll have to visit Tirol now to make up for your lack of rosy-finches?

@Joan: thanks! Yes, the conference was amazing, it got so crowded on that mountain I had fear the alps would tumble into the Mediterranean. Don't mention Kruger or the braais, it makes me so sahahahahaaaaaad!! :-)))))) Very glad you had an awesome trip. I guess all trips to Kruger are awesome.