My Scope: Boon and Bane

I have a scope for looking at birds.
My scope and I share some wonderful birding memories and have gone united through the rotten and the glory.
For this I love it dearly, yet it sometimes appears to be one of my most bizarre birding obstacles.
Why?

Because it keeps me from digiscoping.

You see, back in the late 1990s, my good old original scope - my first scope ever - broke down and died. I was a birder without a scope and thus as helpless as a fish on dry land without a bicycle.
Luckily, these were my days in Africa, and a friend from Germany came to visit me in Namibia for a little birding trip of 5 weeks, which was to take us from central Namibia (the Brandberg being our northern-most destination) all the way down to the Cape of Good Hope and back.
As we were going in my private, personal, wonderful Toyota Hilux, there was no need and cost for car rental, and to show his gratitude materialistically, he decided to help me out of my scopeless misery by bringing with him and giving me as a gift an old scope he got from a friend who didn't need it anymore, which will bring this awfully long sentence to an end and we can all take a moment to rest.


Okay. So he brought this scope along, which was an old Asiola that had been manufactured in the German Democratic Republic, likely sometime during the 1960s, making it older than even myself.
However, a free scope is a scope and is better than no scope.
I was very happy to receive it.

Here you can see the scope during a recent heavy duty mission, scanning the fields south of Leimen for anything that might (still) live. 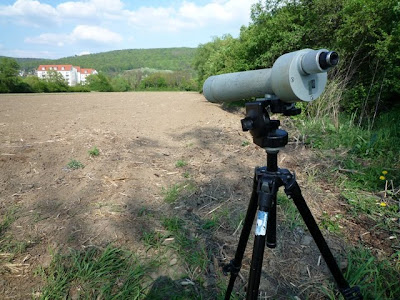 Here is the proof of it being from the GDR (in German: DDR), and that means it's old. However, you can also see who made it: 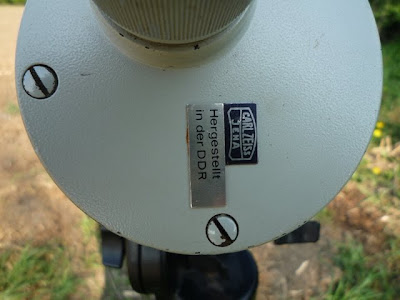 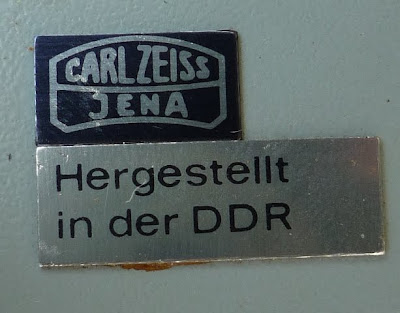 Carl Zeiss Jena.
Yes, folks, I own a Zeiss scope.

And frankly, those lenses made by Carl Zeiss Jena (the East German branch during the times of there being two Germanies) were back then and still are today amazing!

Seriously, they still rival the best modern lenses. I have frequently compared the sharpness of my scope to other, more modern scopes and have found that only the high-end brands like Swarovski, modern Zeiss, and Leica can match the old Carl Zeiss Jena lenses. Other brands found in the middle section of the price and quality range - like Optolyth - don't stand a fraction of a chance.

Sounds good?
Well, it is!
However, my trusty old Asiola has one major disadvantage: its teensy tiny diametre of the eye piece. Look at it, it is pathetic. 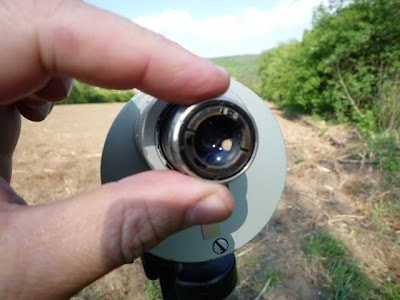 Not only does this mean I had to get used to (and train my eyes for) handling and looking through this scope.
[Whenever other birders with modern scopes look through it, they are downright appalled - until I will describe subtle features on a distant bird that they can't even see. I mean the bird, not to mention said features.]
It also means that it is nearly impossible to line up that eye piece with a digital camera for digiscoping. The field of view is just way too small.
This here is a rather fine example of the best I can do at middle range (the starling was around 50 m away). At long range, there is no reason for even bothering to consider digiscoping. 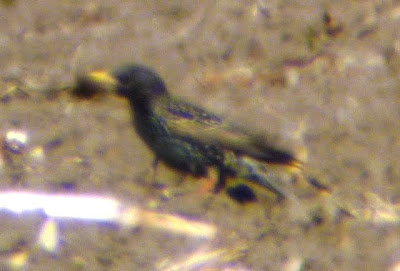 And you see, this is my dilemma, my scope bane:
As a birder, I long for a scope that will allow for digiscoping. I sometimes feel like being stuck and lost in the 20th century and would consider this - apart from a notorious lack of time - to be my biggest birding obstacle.
However, having such a nice and brilliant scope, I would not be able to settle for a medium-priced, medium-quality scope. I would only accept to swap my scope for a modern Swaro.
And as a family man, that's just way beyond my wildest financial dreams.

So I am stuck.
I really need to find next week's winning lottery ticket.
Maybe I'll scope it out?

The cast in alphabetical order

Starling - Sturnus vulgaris - Star [Starling - the German word "star" does not mean what it means in English, with a star as in "star dust" being called "Stern" in German, yet I suspect that possibly the German "Star" could have its origin in the bird's tiny white "stars" on a black, nightly sky (rest of the bird's plumage). However, I don't know.]

Jochen, pass around a hat on Paypal. Maybe you'll find a generous donor among your readers. You certainly deserve a good scope. (I am not joking. I know of someone who collected more than enough for a rabies shot that she needed.)

Look on the bright side - that scope probably does a hell of a lot better job against a bear than a Swaro.

It's also less likely that someone would be tempted to steal it.

@Hilke: thanks, that's a lovely thing to say. However, I don't see myself trying to find a generous donor as - you know - I do have a decent salary, it's just that it all goes more towards organic food, toddler shoes and child care than birding equipment. If I was to gather money, I'd probably end up looking happily at the sum, looking longingly at the Swaro in a cataloque, then looking alarmed and worried at the population trend of the Spoon-billed Sandpiper and end up donating everything to BirdLife International. Which, you know, suddenly seems like a good plan...

@Patrick: Ha, "the bright side" of my scope? Look, it's the lack of brightness due to the small lenses I complained about :-))))))
And you know, if ever I end up somewhere in bear country, I will probably take my old Asiola along, just in case. Because there are a lot of things it does very well, even showing me birds, it's just the blinkin' digiscoping. Try nowadays to submit record after record after record of very rare birds (which happens when you've been birding for 25+ years) without any "modern" documentation.

@John: oh, it's quite the opposite. Those who know them value them greatly, and even though you can still find bargains on eBay for below 100 Euros, they are almost collector's items.
As a matter of fact, I am planning to sell it in 18 years to finance my son's university education. :-))

I'd like to point out though that I wasn't really complaining. Just explaining.

I will always revere the scope that allowed me to find my Washtenaw county Blue Grosbeak (is your next post going to be on the tripod? - you own an explanation to the other readers about this one!)

I have a couple of points I would like to do.

First, I was once a big fan of digiscoping. Then I acquired my scope (A pentax), (before my son was born) it was my primary intention to spend more time digiscoping, and maybe approach the picture quality of Jerry Jourdan, for instance.

Well, I now have a baby, and a lot less time, I changed my approach on this. If I see a bird, I need to be able to take a picture quickly, and move. Digiscoping is great, but it require lots of time and patience, things you don't have if you are a dad. So digiscoping has to remain a simple way to document some species, and that's about it.

Therefore, is there really a need for a 3000 dollars swaro? It seems to me that a cheaper scope would allow you do document 99% of the species you would with a swaro

Second, I was really impressed during our last Chrismast Count (I was the leader by default of my area) then one of the birders showed me his simple scope (vortex skyline) which he has paid (new) for less than $500. Seriously, take a second look at the cheaper scopes. You might be impressed by how much those have been improved lately.

Third, I think it is crazy these days to buy a new scope, unless you have won the lottery. There are many used scope out there that are really good. Just need to be patient. I bought mine for a third of its new value.

Agree with Hilke, try a Paypal thing. I'll pitch in, if only for the grosbeack, or the birding books you left me. Or take a week of vacation and come in Pointe Pelee to lead some german birding tours....

I have been exploring for a little for any high-quality articles or blog posts in this kind of area .
Exploring in Yahoo I eventually stumbled upon this
website. Reading this information So i am happy to express that I have an incredibly good uncanny feeling I discovered exactly what I needed.
I most without a doubt will make certain to do not overlook this web site and
provides it a glance on a continuing basis.