I just got back from another enjoyable afternoon's sparrow hunt at the Arb. It was pretty cold, very much so thank you. On the German weather forecast, they always have "felt temperature" which is derived from combining the actual temperature with humidity and the wind chill factor. Or the "felt time" on the radio shortly after the alarm clock went off: "It is now 6:30 a.m., felt time 4:45 a.m."

I think birders should introduce a "felt bird ID", especially in this kind of weather.
"This is a White-throated Sparrow, felt species: McKay's Bunting."
I had quite a few felt McKay's today.

This whole "felt ID" could then be extended to, say, habitat:
Some of the American Tree Sparrows at the Arb for example have a rather annoying feel to them. A few of them always hang around a patch of high grass amongst a few pines. Grass amongst pines? Hello! Another felt Bachman's Sparrow anyone?

Despite the very cold wind it was good birding. I saw 4 species of Woodpecker, Hairy (which is quite nice), Downy, Red-bellied and a sparkling Yellow-bellied Sapsucker, very neat. Two remarkable things about the woodpeckers:
a) I am now only seeing male Red-bellieds, no females,
b) I think the Sapsucker really seems to link the Jynx-Wrynecks to the woodpeckers.

Other nice birds were Cardinals in bushes with snow, a lone Hermit Thrush, a Red-tailed and a Cooper's Hawk.

In Germany, we also have a few "felt species".
Like the Yellowhammer in winter. When the bird is facing you or you can see its head all is fine and it is easily identified as a Yellowhammer, shown on the picture below (from Germany in April 2005 and sadly not from today's trip to the Arb). 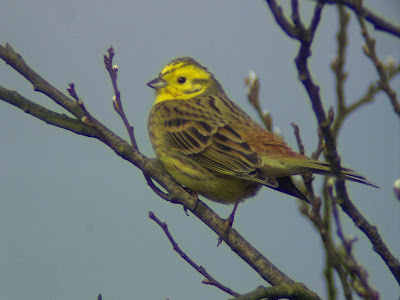 However, the moment it turns it back on you, it feels suspiciously like a Pine Bunting from Siberia, a first degree national rarity in Germany.
The following image is of a female Yellowhammer from behind (again from Germany, April 2005): 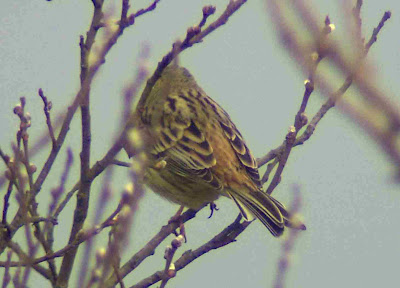 And this here is a nice Pine Bunting observed in Finland (where also very rare).

You see? There's just no escaping the felt ID, and I can't wait to go for those felt wintering Prothonotary Warblers next weekend...
Posted by Jochen at 00:30