What were they thinking of?

With Blogger still giving me a few problems and with work being as fundamentally exciting as ever, I decided to reflect upon the names we give to birds. Another reason for doing so is that I have a few pictures of a Blackburnian Warbler (again of May 2005) I want to upload to the blog, pushing me to think of something to write around the pictures.

Bird's Names. They are sometimes rather strange and one often wonders if it was a mistake to let the naming of newly described species fall prey to scientist and not ... well ... florists or maybe cooks. It takes a lot of creativity to name an ordinary pie "Quiche Lorraine", and look at the result: it sells!
Seriously, let us take the poor old Blackburnian Warbler as an example. This is a bird so incredibly bright orange that you could immediately spot it in a sea of orange trees amidst a mass of ripe fruit and they named it "Blackburnian". Who in his right state of mind and allowed the privilege of naming a bird this amazing would come up with such a boring name? Karl Lagerfeld? Surely not! Look at this image: does this look like a bird you'd name "Blackburnian Warbler"? 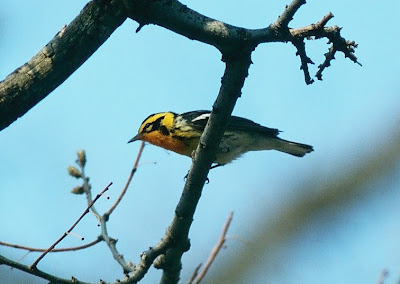 Ok, point taken, the picture is rubbish. But then look at these images of the species commonly referred to as "Blackburnian Warbler" and you'll agree the name's a disgrace!
Its scientific name "fusca" is even worse, meaning "dark" or "dusky"! Can you believe it?
What were they thinking of?
I actually found the following statement here and since I could not possibly have put it any better, I took the freedom of citing it word by word: "He [the guy who named it] must have been looking at a particularly drab specimen since the plumage is so spectacular that other locally-common names are Fire-throat, Fire-brand, and Torch-bird."
Exactly!
Now, who is responsible for this?
Thomas Pennant is the one to be blamed partially. He named the species in honour of an English botanist, Anna Blackburne (1726-1793, the times of Linnaeus). She had a brother living in the eastern US (interesting time period to be living there) who supplied her with skins of North American bird species, and amongst them was the poor warbler. She eventually loaned a few of these skins to Pennant who showed his gratitude to her by naming the bird "blackburniae". It was later found that a Dutch scientist (Muller, 1776) had already described the species for science ("fusca") just a few year before Pennant, so it was bad luck for Anna. Well, at least her loan to Pennant is still honoured in the bird's common name, so there's no need for Anna to complain.

But just take another look at the poor warbler: 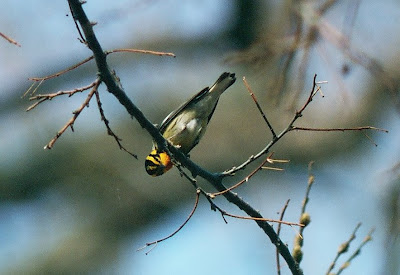 Well, frankly, wouldn't your world be upside down if you were called "Blackburnian" simply because someone shot one of your kin almost 300 years ago and sent the dried corpse to his sister who couldn't think of anything better to do than forward it to some scientist?
Why was the species not named in honour of its own beauty and in remembrance of the poor warbler that gave its life (surely not volunteering for it) to science? 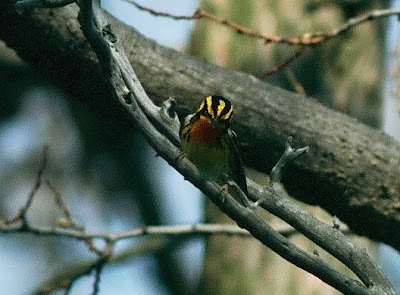 This whole issue really isn't only about what's described in the bird's name, it is also often horrible just how long certain names are. Many bird species indeed were given so ridiculously long names that no birder would even think of pointing them out to their fellow birders just to avoid having to pronounce their name. Every German birder for example will have to rely on their own experience to find a Mourning Wheatear because no one else will ever bother to tell them "Oh look, on that bolder over there, that must surely be a "Schwarzrueckensteinschmaetzer".
I know what you are thinking now: Germans have a tendency for long words and as long as you don't have to learn German bird names, why should you care?
Then you've never been to southern Africa and done some road side birding from a car travelling at 60 miles an hour. One of the common birds on the wires along the roads is this, but just try telling the birder in the seat next to you: "Hey, there comes another Swallowtailed Bee-eater" without adding "a mile ago" right away. And would you book an expensive flight to Cape Town if you were told it was possible to see Southern Double-collared Sunbirds there? Of course not. If however you were shown these images (scroll to the bottom), would you reconsider it? Of course you would, you're probably doing it right at this very moment. But a Pink Pigeon on Mauritius will get you all excited even without a nice picture. Oh well, here's the usual link to Charlie Moore's gallery anyway.
See what a big difference a bird's name can make?

This has been a lot of complaining, I know. Maybe some of it can simply be attributed to my gloomy winter mood and I really should focus more on the bright side of things. We're hopefully already through almost one quarter of this winter and some bird species were given common names so nice that they spread hope and comfort wherever they are seen. Like the one shown below:
it will all be fine soon. 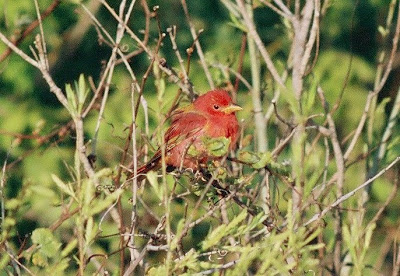 Summer Tanager, southern Ontario in May 2005