As I was merrily writing up my CBC account on Monday very much minding my own business and being content with me and the world surrounding me, an email by Curtis Powell arrived which included a word that I - as a European birder - was conditioned to recognize immediately even if it was muttered silently in a bursting football arena during the last minutes of a world cup's final (and forget this year's final, it was crap, Germany should have won the cup):

He had seen a nice assembly of Gulls quite a bit east of Ann Arbor containing amongst others Lesser Black-backed, a possible "Viking's" and ... that gull, an adult Thayer's!
For anyone Gulling around Europe, finding a Thayer's must be like (to stay within this context) wining the football world cup, or the super bowl for that matter. Well, an adult Great Black-headed Gull in breeding plumage might get very close to a Thayer's, but the thrill about Thayer's is that it is such a tricky beast to identify in any plumage, so it really is regarded by many as the "creme de la creme" of Gulling.
Of course I was all excited about this and immediately asked around if anyone from the Ann Arbor area would be after the gulls in the next few days and wouldn't mind some company. My pleas for a lift were rewarded and I was fortunate to team up with Bruce Bowman today!

Bruce had corresponded with Curt and had a few likely spots for Gulls on today's agenda around the area where Curt had seen them. The first place we wanted to check was Grace lake, also known as Tyler Road lake, which is an artificial reservoir and usually has a lot of gulls resting on it. Before we got there, we spotted quite a large flock of Canada Geese east of Haggerty Road but scan as much as we might, there was - as I had anticipated very much - not two, not three, no, an incredible zero Snow Geese mixed within! However on returning to the car, a small group of geese came in to land and amongst them was one tiny little Cackling Goose! Now, I have seen two Cackling Geese on a small reservoir south of Ann Arbor a few weeks ago and the much smaller size was obvious on those swimming birds as well, but in flight the difference is enormous, it appeared just like a Mallard amongst Swans.
Arriving at the lake, we were relieved to see that there were well over a thousand Gulls present and started scanning immediately. Unfortunately the distance was quite significant. This didn't matter much when it came to picking out a few adult Greater Black-backed Gulls amongst the American Herring and Ring-billed, but finding a Thayer's was going to be one hell of a challenge. Finally our scrutiny was rewarded and we were both looking at a very nice and crispy clear adult Glaucous Gull. What can you say, this species doesn't really make your day when out to add Thayer's to your life list, but it was still a great bird, a good find and we enjoyed it quite a lot, especially as I have only seen very few Glaucous in the last couple of years and now that I think of it, this was possibly my first ever adult bird!
After having looked at this flock of Gulls for what must have been an hour or more, we decided to try the other spots on Bruce's route that usually also host gulls in their thousands and would allow for better views as the distance to the birds wouldn't be so large.
We therefore proceeded to Edison lake, Belleville lake and eventually Ford lake but were a bit disappointed at finding these almost devoid of birds. A few Common Mergansers, Gadwall and a handful of Gulls here and there, but no major Gull roost.
We then tried a few good Gull sites south of Ann Arbor, like Avis Farm ponds and the Ann Arbor landfill, but also found these areas largely devoid of Gulls and eventually returned home around 2 in the afternoon.

So there was no Thayer's today. Surely it would have been nice, but a day you get to go birding at some interesting spots you have never been before and find a Cackling Goose and an adult Glaucous Gull is nevertheless very far from being just another dull thayerless day and of course Bruce was excellent company and I was very happy to finally meet him in person after such a long email exchange.

Actually I am quite content we missed out on Thayer's today.
You see, it is too much of a special, meaningful bird to get right on your first and easy try and it will be more appreciated when I find it here in Ann Arbor flying along the Huron river next week. And while I am at it, anyone else but myself in need to be fooled right now?

Here are some images of a second winter Glaucous Gull I found at Sassnitz Harbour/Germany in March 2005. I was going to claim this was taken on a birding trip on the Bahamas but unfortunately I have never been there and I also suppose the Sea and Coastal Fishery of Mecklenburg-Vorpommern (the most north-easterly state of Germany) doesn't have too many of its boxes laying around the Bahamas. But it was a very nice find even outside the Caribbean. 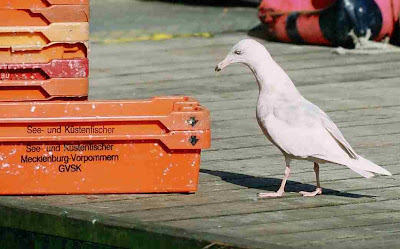 I wonder if they left anything in there. 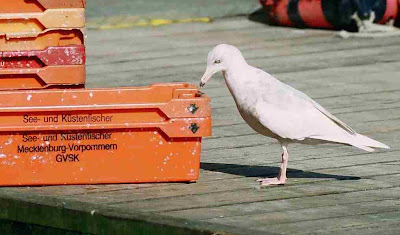 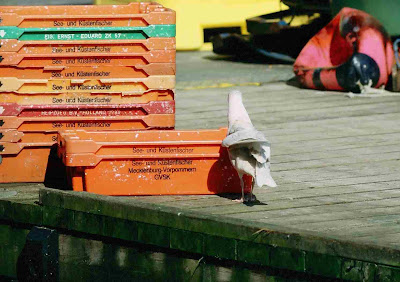 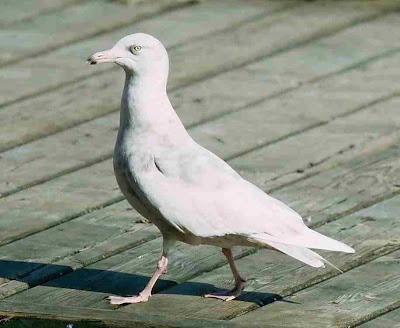