Yesterday I went for yet another nice short bird walk through the Arb on a sunny afternoon, jacket over my shoulder and enjoying the sun.
Something was funny though (non-laughter funny): where were all the warblers ?
Man, according to the weather I should have scored well over 15 warbler species yesterday but got none, nada, nix, zero?
Does anyone out there know what's going on? Has the long feared "Silent spring" come at last?

I also met a few people out there in search of "Winter", at least many were wondering where he was. I have no idea who this Mr. Winter is and have never met him, but apparently he must be quite an important guy who has an appointment here in Ann Arbor, some major meeting with basically everyone it seems, to which he is late.
Apparently, this "Winter" is also somehow interested in birds, at least he always has a few species at hand that he is taking with him where ever he goes, like Crossbills, Waterfowl and partridges that got lost on a pear tree.
Winter also seems to enjoy Catharus-Thrushes, just like I do, and it is a pity we didn't meet yesterday. I could have shown him the nice Hermit Thrush I was watching, and as far as I know, Winter thinks a Hermit Thrush is a pretty good species for December up here in Michigan.

I don't have a picture of a Hermit Thrush but (as always), Charlie Moores has even two galleries, so click here or here to enjoy what Mr. Winter would be enjoying if he was with us today. All I can offer is a picture of a Veery from May 2005. Come to think of it: strange thing no Veeries were around yesterday... 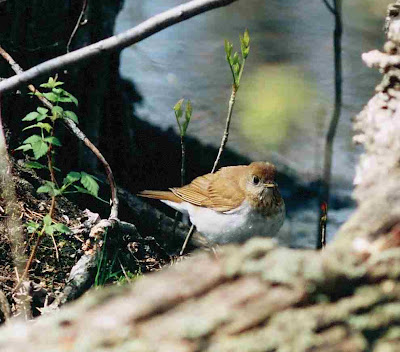