Today was our third try for gulls and my third go at finding a Thayer's Gull.
Bruce and I met downtown just before 11:00 a.m. and after picking up Jim Gruber we headed out again to the Salem Landfill where we got around noon.
On getting there, we could see that all the gulls were way up flying in a big whirl above the dump and on reaching the top, there was not a single gull on the ground and above us roughly a few hundred, much fewer than when we were there last Friday.
Bummer.
What we did encounter up on the dump right after opening the door of the car was a fierce and very cold wind.
Maybe the Red-tailed Hawk that flew around the slopes had flushed the gulls or they just didn't like the wind up there, but it took them quite a while to settle down again with us waiting patiently in the car.

Finally the gulls seemed to come in to land again and we ventured out on foot across the landfill to a good vantage point up on a small ridge. This time the ground was frozen making the walk across the mud much more pleasant and the smell wasn't as bad as last time either. I even managed to eat a chocolate bar on the dump, not something one would normally enjoy.
Shortly after we had started walking, we spotted movement on the ground and soon found ourselves standing just a few metres in front of a small group of 6 Horned Larks. Now, for someone who's got the insanity of enjoying subspecies, encountering Horned Larks delivers instant joy. North America alone is host to no less than 16 or even 21 subspecies (depending on who you ask or what you read), making this one of the most diverse species on the continent. An interesting link to the different subspecies is here and if that isn't enough, try also here.
In May 2005, I was somewhat disappointed at finding only the locally breeding subspecies which is called the Prairie Horned Lark (Eremophila alpestris praticola). This subspecies is characterized by a very pale facial colouration with just a shade of yellow on the throat and an almost whitish supercilium. The breast and flanks are mostly white and don't show an obvious brown or buffy wash to them. Here's a picture of a Prairie Horned Lark I obtained in May 2005 on Gooding Road a bit south of Ann Arbor. 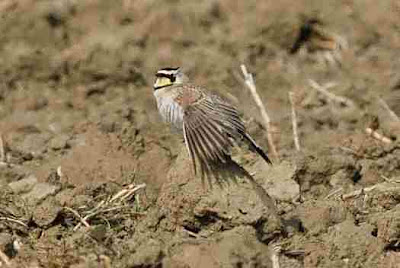 Today's birds seemed different however, with an overall darker colouration, obviously reddish brown or buffy breast sides and flanks and a few of them (presumably the males) showed a strong yellow tone on the throat and the supercilium very much reminiscent of the Scandinavian subspecies flava. After consulting a few birding sources on the internet, I am rather confident that the birds we spotted on the barren and frozen ground of a "mountain ridge" in the biting coldness of a northerly wind were indeed Northern Horned Larks of the nominate subspecies E. a. alpestris. At least the description fits well and this is the only other subspecies we can expect to occur here, so it's good enough. Well, of course they might have been a stray group of European birds but I didn't look that closely...
On reaching the ridge and scanning the surroundings we still found very few gulls on the ground and those we scanned through were mostly Ring-billed Gulls with only a few American Herring Gulls mixed in. Conditions were less than ideal with the gulls constantly taking flight again and facing away from us even in the air due to the strong and cold wind. After showing some good will and trying for 10 minutes or so, we finally decided that this was not the right time and place for finding Thayer's or California or Slaty-backed Gulls and decided to move on to another location, Grace Lake on Tyler Road.
Before we left, we did notice the amazing view that the clear and cold air afforded us from on top of the dump. We could easily spot the high rise buildings of Ann Arbor (12 miles/20 km away) and downtown Detroit seemed just around the corner (although roughly 30 miles/45km away).

Grace Lake was really good, I must say, with around 3.000 Gulls present. We had found a much better observation point than last time, and by much better I mean the reduced distance to the gulls and not the flock of Dark-eyed Juncos we saw at that particular spot.
A thorough scan of the gulls (with around half of them on the lake and the other half sitting on a slope on the opposite side) produced a few Ring-billed Gulls, around 15 Greater Black-backed Gulls, at least 2 adult Lesser Black-backed Gulls and one sparkling adult Glaucous Gull. Hmmm, I know that an adult Glaucous Gull looks far more cool than a Thayer's but I still couldn't really focus on it for long, scanning the numerous American Herring Gulls for some pale winged birds instead. A few of the adults showed a very reduced black pattern on their wing tips in flight and had me half excited but each and every one of those turned out eventually to be nothing but an ordinary American Herring Gull. The Sibley guide mentions that around 1% of American Herring Gulls in the East show a reduced amount of black on their wing tip and I had to face the barren truth: there was simply a slight accumulation of this 1% at Grace Lake today (comparable to northern populations of European Herring Gulls Larus argentatus argentatus whose wing tip pattern also resembles Thayer's, frighteningly so), but no Thayer's that we found.
We eventually gave up - of course still very happily so with Glaucous and Lesser Black-backed Gulls seen very nicely - and after checking a few spots south of Ann Arbor (American Kestrel, Canada Geese and Mallards being the only somewhat noteworthy species) returned home.

Well, Thayer's Gull seems to be one of the species I really need to earn myself for some reason. But I'm hanging in there, no reason to get doubtful just yet!

Today however I have noticed that my last visit to the Arb was one calendar year ago, so I am currently planning to go there next, possibly tomorrow weather permitting.
It has become cold at last.
Posted by Jochen at 22:40