Well, I know my posts recently haven't been all too exciting but as a matter of fact I have been working. Not only for my employer, oh no, also a little bit here and there on a few more extensive identification posts for that wonderful Cooperation project with Charlie Moores. Good stuff hopefully and soon to come...
In the meantime, and with the weather being not so nice for birding anyway, I went through my archives in search of something meaningful to put on the blog. So in - sort of - preparation for the Gull article Charlie and I are working on, here are a few comments on the development of bare part colouration in the Common Gull, Larus canus. The term "Common Gull" here does only pertain to the Eurasian forms Larus canus canus and possibly L. c. heinei (or intermediate birds between the two) and does not include the North American Mew Gull!
And as always a word of warning: the quality of the images you're about to see is excessively brilliant, actually so much so that you may never again want to look at bird photographs or even re-visit this blog. If you proceed: you have been warned!

The general concept of bare part colouration in Common Gulls as seen on the German Baltic coast during winter is as follows:
1) During their first winter after fledging, both the bill and the legs are rather bright pink and the bill shows a black tip.
2) In late winter or spring the pink gradually changes into a greyish blue which is maintained throughout the second winter until the next spring.
3) With the moult towards an adult-like plumage, the bare parts change from pale grey-blue to a more or less bright yellow, the less bright birds show a greenish/grey tinge to the yellow.

Here are a few examples of first-winter birds, all taken at the Stralsund waterfront during January and February.

The next three images show birds with bright pink bare parts. This is common during early winter and those birds that maintain a large part of their juvenile / first winter plumage into spring also seem to maintain the pink bare parts. 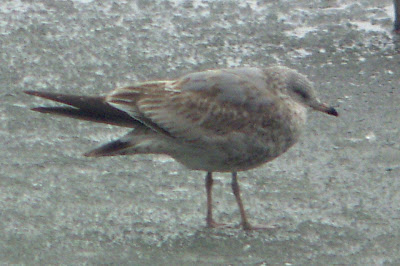 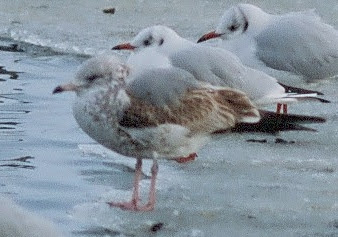 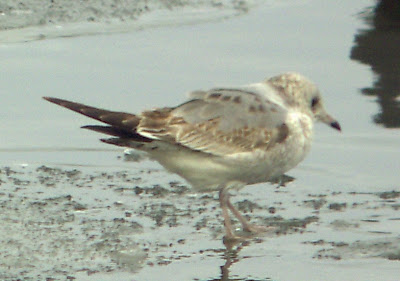 On more advanced birds (with a cleaner white body and a largely grey mantle) or later in winter/early spring, the change in bare part colouration becomes apparent, mostly on the bill which changes to a cold blue-grey. The legs however often seem to remain pink for a longer period. 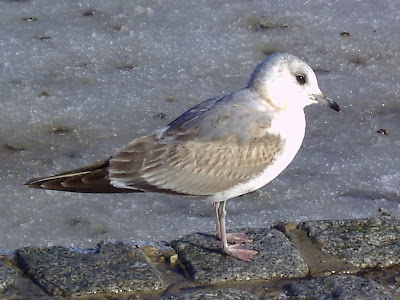 By March however most first-winter birds show more or less greyish bare parts and only a minority still shows pink prominently. 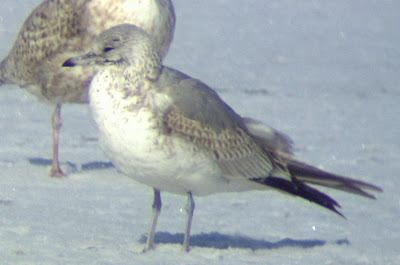 Second winter birds are also variable in their bare part colouration:
Most birds one encounters are showing the pale blue-grey that has been acquired during their late first-winter phase. In those birds all the wing coverts visible on the folded wing of perched birds are grey and adult-like.
This is demonstrated on the next few images. 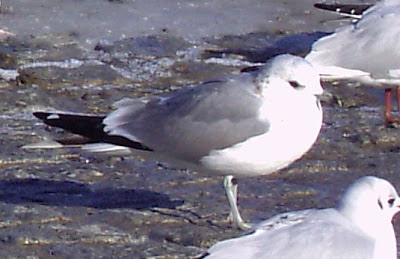 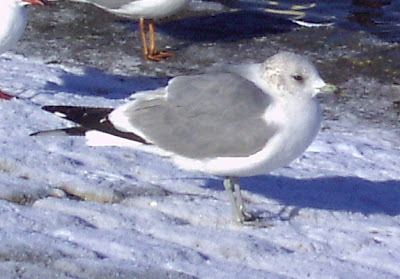 Some second winter birds however show a brownish tinge to their wing coverts and a blackish base to the tertials and it is these birds that usually still show some pink on their bare parts, most obvious on their legs. This pink however is not as bright as on average first winter birds. 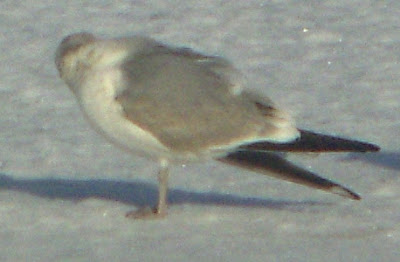 This little bugger never stopped preening while I watched it, so I never got a picture of it with its head out.

In their third winter, Common Gulls have reached adult plumage and show yellow legs and bills. The yellow tone varies however individually or geographically (the Eastern heinei supposedly showing brighter yellow) and ranges from pale grey-green-yellow to bright yellow.
This variation is demonstrated on the next few images: 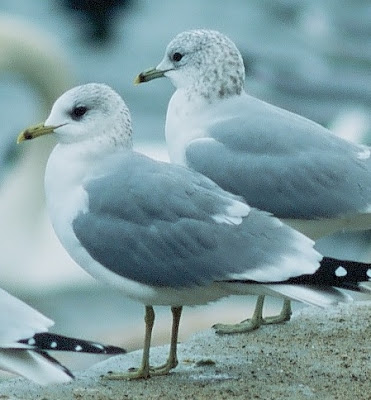 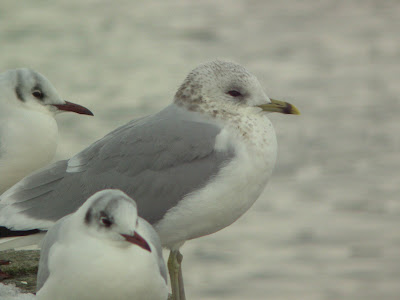 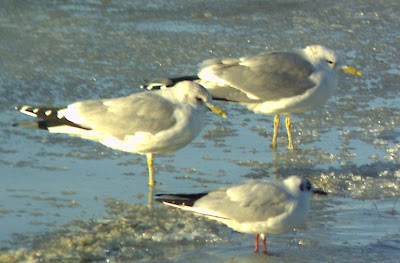 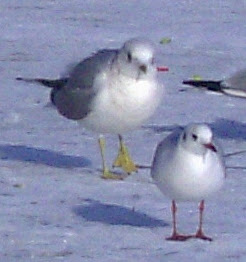 OK, this is all well-known and nothing new. Additionally, the pictures were horrible, so where is the punchline of this post?

The punchline is a bird I saw on the Baltic Coast on March 13th, 2006!
It was easily aged as a second winter bird by the brownish primary coverts, the limited amount of white on the wing tip and the bare part colouration which was not yellow.
BUT even though it was clearly an "advanced" second winter bird with a mostly adult like plumage on the folded wings, it showed bright pink bare parts that would even be unusual in first winter birds this late into spring!
Here are the images: 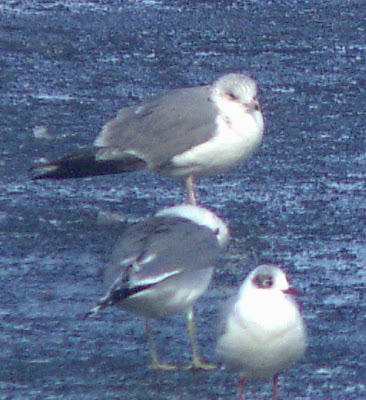 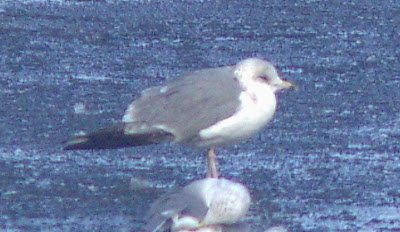 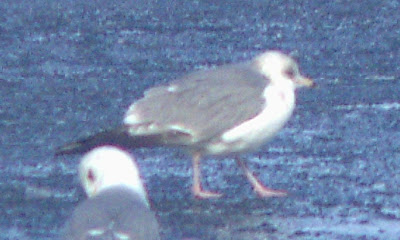 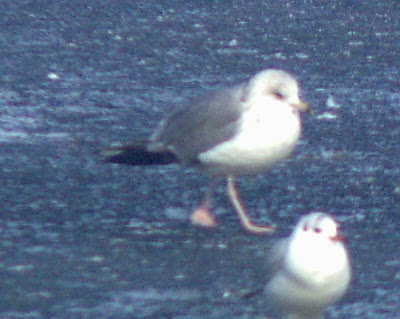 Surprised?
Well, I sure was.

A Gull so fair and foul I've never seen:
Fair for being such a great surprise and an exciting bird to find.
Foul for demonstrating once more the unpredictability of gulls and the chaos connected to plumage and bare part development!

UPDATE
Today seems to be Gull day on the blogosphere!
Check out this, this, this and this!
And frankly, this is admittedly far more exciting than a pink-legged 2nd winter Common Gull...
Posted by Jochen at 14:37

Wow, talk about informative. I'll make you a deal...I'll send the Ivory Gull your way if you can convince a Common Gull to fly to Albany.

Well, I'll do my best but communicating with the Commons in Germany is difficult from my current position in Michigan.

Glad you found it informative. It is these little things one barely finds in the ID books but that might cause problems especially with extralimital birds.
And that's exactly where Charlie Moores and I are trying to go for, so stick around, there should be more of that stuff coming this way...

You know-I'm trying to absorb a little more info about stages of gulls but I haven't quite the patience yet.-I went to see Iron Maiden about four or five times about 15+ years ago?-They were one of my favorite bands outside of Zeppelin at the time.-