A Different Day at Point Pelee

a) The month of May
b) Warblers
c) Vagrants

And this really seems to be all there is to it. Take a look at my previous experiences with Point Pelee:

a) I went there in May 2005 (repeatedly during the month)

b) I encountered 31 species of warbler there, the daily maximum being 23

c) I saw a Kirtland's Warbler and a Summer Tanager (and saw a LeConte's Sparrow, which one could also call a rather rare encounter).

See? Three out of three, that proves it. Here's a nice picture of a Baltimore Oriole from back then, taken at Pelee in May 2005, which is usually one of the first impressions one gets from Point Pelee. 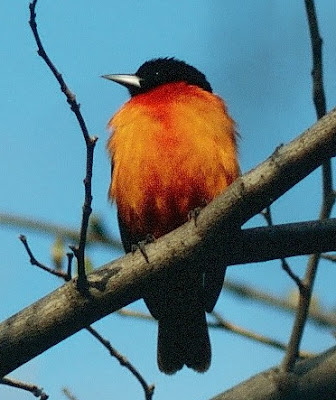 And this is the first impression we got when we went there in early February this year during a severe cold spell. Did you recognize it? No?
Well, this is the beach just before you enter the park, looking South-west.

Now, if you compare the two images above closely, you might notice that they are different in a subtle yet distinct way.

OK, to be honest, I wasn't really expecting things to be in complete accordance with the three points mentioned above when I went there in February but - man - I can tell you it was a very different experience!

When we drove in towards the information centre, the freshly sanded roads were attracting quite a few birds, namely Northern Cardinals, American Tree Sparrows, White-throated Sparrows and very unhappy Starlings.
At the information centre we inquired about the recent bird observations. Frankly, I was surprised that the centre was open at all and did not really expect any significant rarities to be around. Surprisingly, there were a few bird observations written on the large board in the hall, most surprisingly Turkeys (and darn, no massive influx of Ivory Gulls). I never knew there were Turkeys at Point Pelee!
Leaving the centre to get the birding started, we planned to walk along the beach all the way down to the tip and back. First we tried our luck at the West beach but soon decided that we really weren't too keen on proving to the world that no man can make it to the tip and back alive with this kind of wind chill.
Of course, we had been expecting this and one of the reasons for choosing Pelee as a weekend destination was the geographical fact that one gets to choose between two beaches, whichever provides the best shelter from the storm.
So it was the Eastern beach we walked along all the way down to the tip. The lake to the East of the peninsular looked much more peaceful and - who'd have guessed it, there were even birds around on the water! 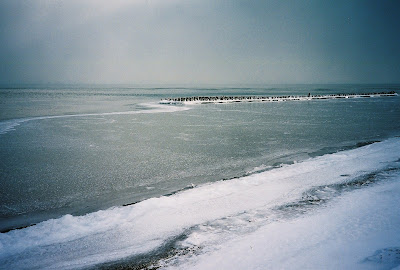 Amongst the floating ice we soon spotted many Goldeneyes, Common Mergansers and a lone Long-tailed Duck. Looking towards the north we could see a small group of Canada Geese and just like on the Baltic in winter, the genus Haliaeetus seems to maintain a very affectionate relationship with geese, thus providing us with a good view of an immature Bald Eagle close to the geese (we could tell it was an immature because it wasn't bald yet - ha).
The great price however was the landscape, to be honest - and a group of Tundra Swans out on the lake.
I really like swans, and in this kind of landscape they are just amazing to watch: 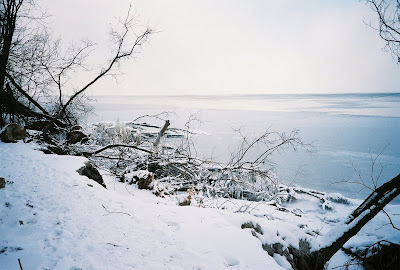 The beach itself was rather interesting as well and provided us with good observations of more White-throated and American Tree Sparrows as well as an immature (2nd cy) Northern Harrier.

And this is what it was like on the southern tip of Canada. We really tried - being that far south - to see Florida, but utterly failed. I had really hoped for this particular lifer there (seen around the same time), but well, maybe next time... 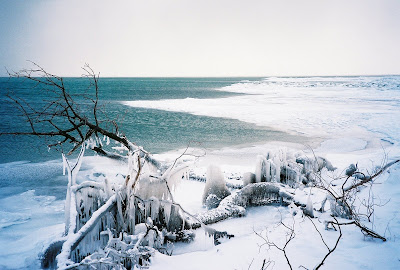 The tip of course was not quite as birdy as it was in May but yet again, your Bell Tower Birder provided Canada with yet another great record: there was indeed out in the storm Canada's southern-most Northern Cardinal. I would say it was great to watch in the snow and ice but heck, it was so cold and stormy that one barely dared to expose even a blinking eye to the wind.
On the image below, you can sort of get the picture what it was like. You see the ice on the branches of the water drops driven there by the wind before the bay froze over completely?
Yes, that's cold, really cold.
And now imagine a Northern Cardinal on one of those branches. 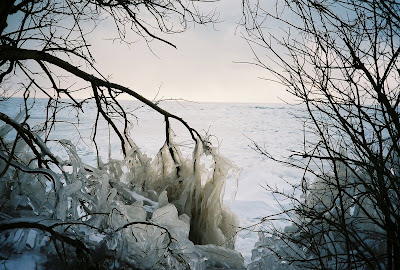 You'll have to admit: a Cardinal is one hot species of birds, but just not hot enough to get a birder's enthusiasm going for too long in that kind of weather.

The walk back to the information centre was rather uneventful along the tarred road. Sure we would have missed a flock of Whooping Cranes on the road for want of making it back to the warmth of the car quickly, but I really think there weren't any.

After we had warmed up a bit, we decided to try our luck at Wheatley Harbour to maybe get a Ross's Gull amongst the many Thayer's or at least have a good look at a Slaty-backed or two.
Upon getting there, there was a fascinating whirlwind of zero gulls. Nada, nix.
Just ice.
Oh well, as with the hopes for a Yellow-throated warbler: there shall be other times.

Driving towards Leamington however we stumbled across a nice flock of Snow Buntings besides the road and a Bald Eagle - this time a sparkling adult - flew over so closely that I could have taken this kind of photo easily if I had not been in a car and of course had a decent camera.

It got dark rather quickly and to the South-west we could see a major snow storm approaching, so we decided to start our 2 hour journey back to Ann Arbor after what turned out to be yet another memorable day at Point Pelee National Park.

Finally, to finish this post, a nice game that was very popular with birders at the tip on May 10th 2005: 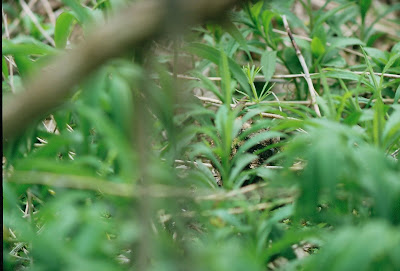