Music and Birding: One of the great and most incredible harmonies this world has to offer!

And I am not talking about the wonders of a morning's bird concert or the song of a Red-winged Blackbird. No, I am indeed talking about human-made music and the pleasure we receive from watching the feathered creatures of this earth.
This interwoven and inspiring relationship however is often little realized by today's birdwatchers and I have thus decided to shed some light onto the subject in form of a blog post.
For starters, here are a few examples:

Many of us have probably picked up their first pair of binoculars and subsequently this fantastic hobby just to finally know what Iron Maiden were talking about in their epic Rime of the Ancient Birdwatcher.
And walking the trails at the migration hot spots of North America's Great Lakes would surely only be half the fun if it wasn't done to the tune of AC/DC's Warbler Struck.
Or - to give you more examples in case you aren't entirely convinced yet - just look at the huge impact Styx had on global birding tours with their song Come Bird Away.

But it isn't just Rock or Heavy Metal that have shaped and been shaped by birding, this fertile symbiosis goes far beyond that. Historians have now agreed that one of Jazz' most eternal songs, Tick Five, was inspired by a weekend's twitching in Cornwall, or possibly Manchester. I am not entirely sure about that but Tom would know...

Amazingly (when we consider factors like creativity and quality) pop music also had a shaping influence on birding. One of the most fundamental and recent interactions between birding and pop music can be seen in Britney Spears' first real hit, you know, the one where people still didn't mind that she can't sing because she looked cute in her school uniform. I don't particularly like it, especially as it stands for an unpleasant situation encountered once in a while when birding, but okay, here's the link to her song, to maintain fair play on this blog: Baby one more time.

Where is the interaction with birding? Ha, you see, that's where the quality-thing or the lack thereof in comparison to Rock kicks in, so I need to explain.
What are lovely Birtney's first words at the very beginning of the song? Exactly:

"Oh baby, baby [she only sang that to sell more records and also reach the non-birding crowds] how was I supposed to know that something wasn't right?"

Ah, now it dawns upon us, clearly she is singing about the subspecific identification of North America's wood warblers!

Here's the classic situation: you see a warbler that looks somewhat strange and you think it might show characters of a subspecies that normally shouldn't be where you are seeing it right now, e.g. a Western subspecies around the Great Lakes. So you take some pictures and compare them to the information provided in the leading warbler guides of North America and surely, it indeed seems to be a strange bird, not a typical Western but also not a typical Eastern, and you remain clueless. What to do next? Easy, you post your pictures on a local birding Internet forum and seek advice there.
And what do you get as an answer by experienced birders (like long-year ringers/banders) who really know their birds and what they are talking about? Nothing unusual about it, just a rather normal Eastern, and field guides can't always show the full range of individual variation.

Yet again, you have nurtured a "stringy" reputation and are forced to do the Britney ("How was I supposed to know?").

The following warbler is the most recent example of a bird that had me do the Britney: 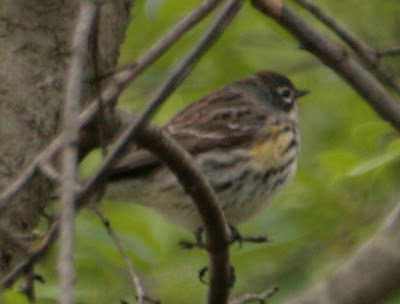 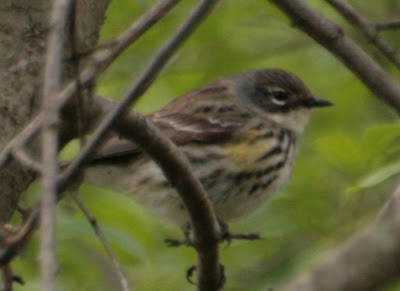 Female Yellow-rumped Warbler, Dolph Park, Ann Arbor, May 2007
It was a female Yellow-rumped Warbler that lacked an obvious white supercilium, showed no dark mask on the auriculars and I found the yellow on the flanks quite reduced, which - according to my field guides - all seemed to point towards the bird showing some characters of Audubon's instead of Myrtle's. Sure enough, all other features of the bird clearly were pure Myrtle, so my guess was it might be just a strange Myrtle or a bird from the introgression zone between the two forms.
But boy, was I mistaken - again. Just an ordinary Eastern Myrtle's Warbler, these things, like the lack of a supercilium, just happen to happen once in a while.
Oh baby, baby...

I have a few more birds that could easily get me into the Britney trouble again, but I sometimes learn from my mistakes, and since I don't like to see myself seen as a stringer (although I do like strings, especially when they are attached to a bass guitar and are played by Steve Harris - yet again, a remarkable correlation between birding and music), I won't say they show characters that might point towards unusual subspecies. I won't even say they could suggest one may be lured into doing the Britney by these birds, nope, they are just a couple of warbler pics and if someone has commented in the captions about possible characters of other subspecies or whatever, it wasn't me, it was a stringing hacker! 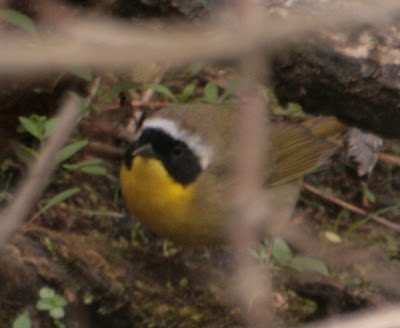 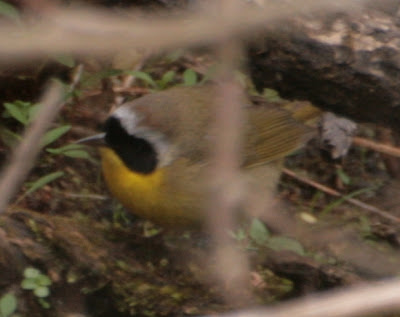 Common Yellowthroat, showing a rather white band across the forehead and a yellow breast that's quite reduced, which might have one think it could be the more western subspecies campicola instead of the Great Lakes regular trichas.

One of the characters of western (chryseola) Wilson's Warblers are supposedly, according to the literature, the almost completely yellow cheeks. These should be greenish in the regular Eastern pusilla. How's your judgment on the cheek colouration of the following Wilson's Warblers?
Would you dare a guess and risk having to do the Britney? 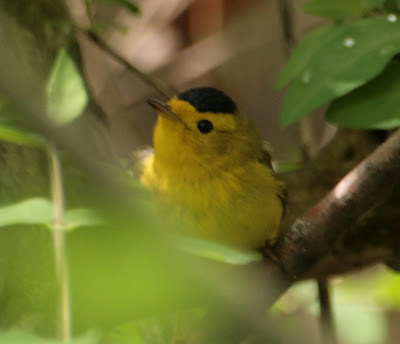 Wilson's Warbler at Ann Arbor's Dolph Park, showing slightly greenish cheeks, but not really greenish if we are honest. 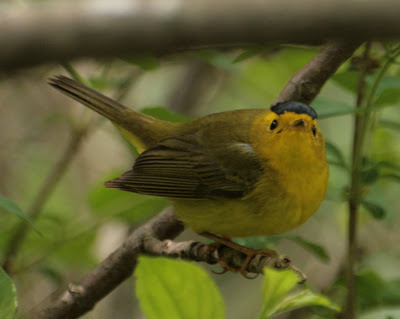 The same Wilson's as above, suddenly not so greenish anymore... 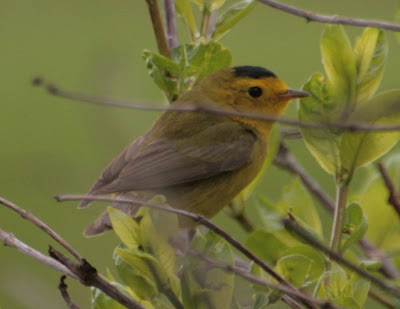 This Wilson's at Ohio's Crane Creek State Park was rather -easterly - dull. 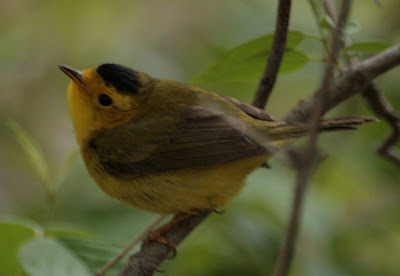 This bird however, seen on the same day, is not so dull after all, as can be seen on the following portrait, a cropped version of a picture posted earlier on this blog. 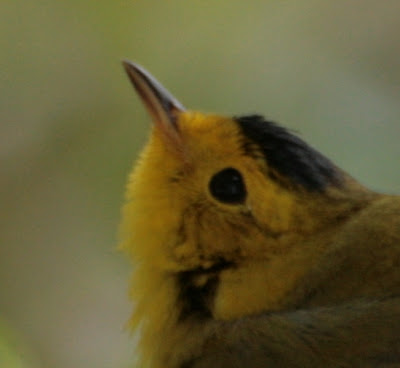 It's a good thing the Western subspecies of North American wood warblers can be recognized by a characteristic introduction to their song:

Hit me baby one more time

We had some confusion with a female Parula this year and some birds that didn't sing their typical songs.-Wilson's Wabler is a heckuva good bird for around here-and to get pictures-even better!
I actually saw Iron Maiden about half a dozen times in the early eighties-AC/DC several times as well.

I'm sure she would have some troubles with warblers identifications. And Vodka does not help either.

Hehehe, you've got a quirky sense of humor, Jochen, but I love it. :) Thunderstruck is one of the best songs to see live. It's even my ringtone on my cell (having replaced Back in Black). I've also seen Styx in concert several times and Dennis DeYoung solo on several occasions.

It is amazing to what extend Rock and Birding correlate!
I'm jealous you all saw Maiden and/or AC/DC, they don't tour Germany that often and I've only seen Maiden once and never AC/DC...