A few days ago, Bruce took me along to another day's birding in and around Crane Creek State Park, Ohio.
Shortly before we got there, he casually mentioned if I wanted to see a Northern Mockingbird.

Well, to answer that, two stories need to be told.

Story No. 1
Northern Mockingbirds are somewhat special. Sure, they are neat birds and sing nicely and do all sorts of nice stuff, but there's something else you only notice when participating in the blogging game:
In the virtual world, they are almost unique to the East Coast of North America. Bird Blogging is the domain of the North-Eastern US. Yes, it may be bitter to swallow for others but we have to admit or rather acknowledge this fact. Just look at the number of blogs from that area or check out the Clustr-Maps on bird blogs: East-coast North American birders are everywhere, they rule. They (as a community, on average) write the most, comment the most on other blogs and often see good birds. And one of these birds is the Northern Mockingbird. The species has a very wide distribution that covers almost the entire southern half of the USA, but it is almost exclusively - frequently- mentioned on East Coast blogs. No one else seems to be blogging about Mockingbirds as much as East Coast birders. And when you live on the Northern edge of the species' range where it is not commonly seen and you have in fact not seen it in a long, long time, this can somewhat hurt. Especially when you are generally spoiled by warbler migration and all the other goodies the Great Lakes have to offer. This, the Northern Mockingbird, is the emblem of East coast bird blogging dominance, and when they write on their blog they have seen "a couple of Mockingbirds again", they are really saying "we won - again".
So there he was, Bruce, asking me if I wanted a chance to show all these New Yorkers and their allies where the real good birding is happening...
My answer?
Hmmm, maybe we should look at story No. 2 first.

Story No. 2
During my time as a high school exchange student in southern Ontario, way back in 1987/88, we - the four excessively cool German "exchange boys" - were sent on a short trip to see the Big Apple, commonly known as New York City. When you're 16 years old and basically have a year off in another country, you tend to neglect birding somewhat and go for the more socially orientated attractions in life. However, one can't deny their roots entirely.
Cruising through the streets of Manhattan we ended up at Central Park and decided to take a break from the concrete. And while we unsuccessfully tried to get a (well, how to call that) double-double date with four female exchange students we met there, amazingly also from Germany, I still remembered to check for other birds as well in the trees and bushes and I managed two lifers, a Tufted Titmouse and a Northern Mockingbird. The titmouse was easily seen again around Ann Arbor in May 2005 and especially since we moved here in November 2007, but that one Mockingbird in Central Park remained alone on my list and the observation now dates back almost 20 years.
And that's a long, long time, as I had mentioned earlier.

Oh, this is obvious, of course I did!

So he simply pulled off the main road at a lonesome farm building somewhere besides the highway in the middle of nowhere, we got out of the car and there it was, my second-ever Northern Mockingbird!
Local knowledge and the exchange of information, I tell you, nothing surpasses local knowledge and information exchange!

The following pictures of the bird were taken on the way back when we were joined by Laurent... 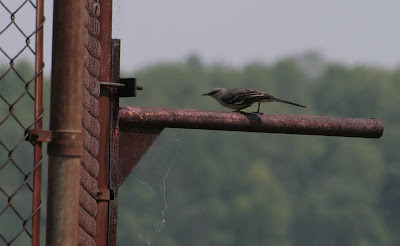 A Northern Mockingbird playing hard to get 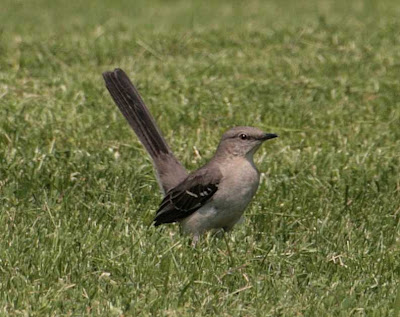 A well-maintained lawn, the realm and prime habitat of the Mockingbird 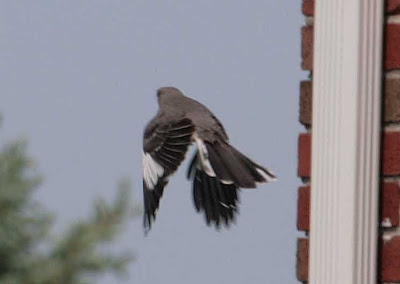 As drab as it may be when perched, it's looking pretty good in flight 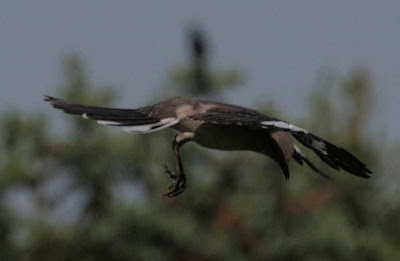 But when you're a Northern Mockingbird in Northern Ohio, you know what you owe to the birding crowds: some spectacular flying! 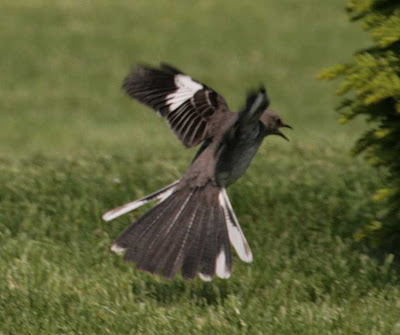 I see so many mockingbirds (on an almost daily basis) that I tend to forget that they count as rarities elsewhere.

See, that's what I mean!

Out here in Albany we only really pay attention to mockers in winter, when, from a distance, they tend to resemble Northern Shrikes.

Oi Jochen - since when did you get all "north-eastern US" on us? One day they'll sed you back to Europe, so don't forget who your friends are :))

Mockingbirds are interesting birds.-I love it when they make the mechanical motion with their wings.-
I was constantly bombarded ny a Mockingbird last year when it decided to nest in my backyard.

They don't take kindly to people being near their nest.

Corey: Here in Michigan we pay extra attention to our Shrikes in winter, hoping they might be Mockingbirds.

And Charlie, I said the East Coast as a group. There are certain blogs outside that area which are revolutionizing, so I hope that might bring me back into the circle of friends...

Larry, I would not mind being bombarded by a Mocker. See, when I was once camping in Northern Norway, out in the Tundra, there was only one place out there in the open landscape where there was enough cover to go to ... well ... a natural restroom, but on the way there you had to cross a breeding area of 2 pairs of Parasitic Jaegers. I'll say no more...

I know the exact spot where you had that Northern Mockingbird; Stange Rd., first house on the right just north of Rt. 2. That bird is pretty known by the local birders. Every time I pass that house I see it.

Hi Ethan,
yes exactly, small world!!!
You are right!!
Can you imagine my surprise when we spotted 3 different Mockingbirds in Michigan's Washtenaw county and found out others even located 9 pairs (!!!) in that area?