It was yesterday, Sunday June 17th, just after 1:10 p.m. that I was leisurely walking along through the Arb with my lovely wife and checked out some swallows when all of a sudden birding hit me hard on the forehead:

Looking at a Northern Rough-winged Swallow through my binoculars, I spotted a strange cormorant far far away in the background, barely visible to the naked eye.
I am mostly used to seeing Great Cormorants of the continental subspecies sinensis in Europe and am aware that Double-crested Cormorants look quite different (as I have seen plenty of those as well while here in Michigan/Ohio/Ontario), but this one looked yet again quite different.

It immediately provoked a certain thought of a certain southern North American species, which is why I took so many pictures, but it was too far to say anything out in the field and any species of Cormorant other than Double-crested is such a meaningful thing to say here in Michigan that one ought to remain quiet unless there's good reason to speak out.
I only found the time to quickly check my bird guides and the pics through the monitor of my camera later on Sunday and took the bird to be nothing but an ordinary Double-crested.

Well, re-checking those pics this morning on my computer led me again to believe that possibly, this wasn't a Double-crested after all but something more unusual for the Great Lakes:

Now, don't get me wrong: I am not saying it is, I am just saying it might!

And this is where and why I am counting on you, the experienced reader-birder of my blog, to help me out:

I'd be delighted to hear from other birders - meaning: from YOU - what you think about the bird depicted on these awfully cropped pictures and why you think what you think it is.
Any opinion from Eared Trogon to Emperor Penguin is highly valued and please feel free to pass this link on to others or download the pictures to have a closer look!

Thank you very much!!

Here are some of the pictures, many showing the bird in similar postures to convey what it really looked like, as single pictures can often be misleading. Don't be too harsh on me regarding the quality, the bird was many, many hundred yards away!

Finally, here's a picture of a definitive Double-crested Cormorant from the Great Lakes, May 2007: 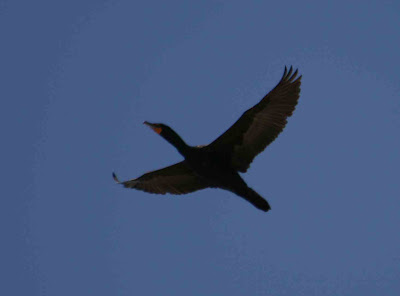 Congrats on a great find. I would say Anhinga. These photos are almost identical to the photos I took in 2005 at the SMRR Hawkwatch. The profile is pretty unique to that species.

If you need further confirmation, you can post it on Birdforum-under identification category-they have thousands of birders from around the world.-congrats on a great find!

I'd say Anhinga too - since no ears and no coronet visible both Eared Trogon and Emperor Penguin can be excluded easily - this leaves Anhinga. From now on I'll photograph all high flying cormorants here in Mongolia...

Definitely an Anhinga! It's shaped just like the one I spotted in NJ a few weeks back. Those photos would convince me if I was on a bird records committee. My second guess would be Dodo.

Wow, this is a hard one for me to say for sure! could be both but I have never seen an Anhinga to be able to compair!

Excellent find! I spotted an Anhinga here in N.Y.C.'s Central Park on June 30th in 2006 but didn't have a camera with me due to forecast of rain.

Here is a post about the sighting including an image from my notebook.

There's nothing like a photograph to convince the records committee!

Wow! I am not enough of an expert to say definitively one way or the other (though it does seem like an Anhinga to me!). But don't you just love those birds you find while looking through binocs at *something else*?!