A Taste of Home

Gosh, it's been quite a while since my last post.
I wish I could tell you that I was away taking pictures of breeding Ivory-billed Woodpeckers in Florida or documenting a family group of Sasquatches in California, with a nice film sequence of them chasing off a bunch of Condors from a carcass, but well, I've just been a bit busy lately here in Ann Arbor and had to focus on other things, like work (8 reports: ouch!), that mystery cormorant (still in the balance) and our return to Germany.

Yes, folks, it is now official and the flights have been booked: from the end of September onwards, this blog will not be a Michigan bird blog anymore but a blog from the German Baltic Sea coast.


No need to cry though, the birding there is absolutely fantastic as well and I hope there will be lots to blog about back home. Incidentally, I think Bell Tower Birding will then be Germany's first and only (??) bird blog, at least I haven't found another one yet. So it might not be too boring after all.

And recently, to be more precise: last Sunday, I got another nice reminder of home and a very unexpected one as well.

Sure, we all know now that Cedar Waxwings are cool birds, which they are also aware of themselves, but the fact that they will readily use any source accessible to them to make themselves look even more special is yet again surprisingly remarkable. Such inquisitive and creative little creatures.

So there I was sitting at the Arb's section of the Huron river with my lovely wife on Sunday afternoon and looking dreamily at a flock of roughly 10 Cedar Waxwings catching flies over the river's surface when this one Waxwing caught my attention.
Sure enough, its eyebrow was in perfect shape, but its tail was special!
The terminal tail band was not yellow as in all the other Waxwings but showed a clear orange colouration.
I remembered the Sibley guide mentioning this and remained relatively calm (not preparing another Science paper in my mind just yet) but still decided that this was surely worth trying to photograph.

The results are rather dull. The background was dark so I either got blurry pictures or heavily grainy ones after switching to ISO 1600.
But you still might want to take a look. 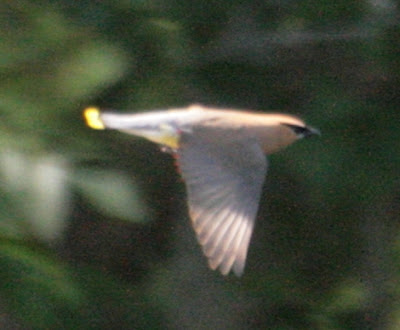 Here's your nice average yellow-tipped Cedar Waxwing. Maybe nice, but not nice enough for some of its species... 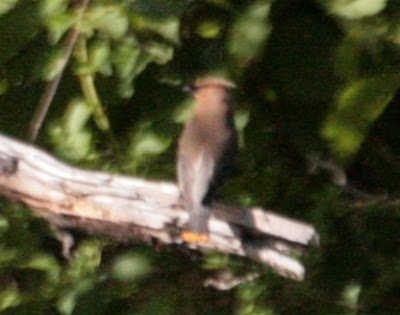 And here's the Paris Hilton of Cedar Waxwing World, with an orange-tipped tail. 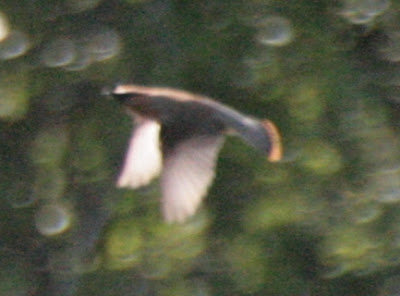 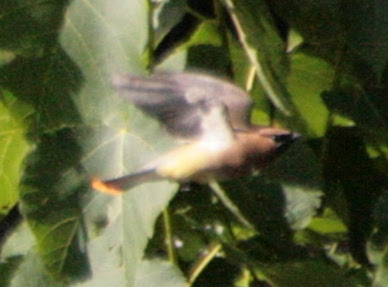 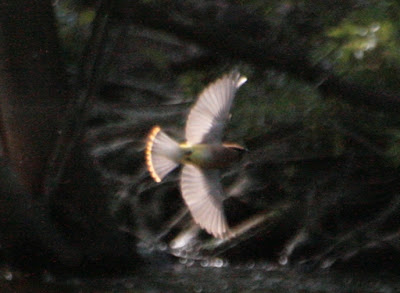 A somewhat better flight shot, but with the light shining through the tail tip, I am not entirely sure this really is Paris and not your ordinary average Waxwing guy from next door.


Back home - in Ann Arbor that is, still - I searched the Internet for possible reasons to make a potential post on my blog more interesting, and I easily found a few pages that offered an explanation:

Orange-tailed Cedar Waxwings were unrecorded in North America until the 1960s. Since then, around 2-3% of the Waxwings are showing the orange tail bands because they - the really vain individuals - picked up red pigments (rhodoxantin) from berries of an introduced European plant species, the European Honeysuckle while growing their tail feathers.

This is very remarkable, like the invention of lipstick in the Animal Kingdom!

Here are the links to Wikipedia and Cornell, the pages I used to read up on the subject.

I should probably now be writing about how somehow touching it was to get such a nice and unexpected "taste of home" and how lovely the European Honeysuckle looks within its natural and original distribution, but sadly I am a Zoologist who has no clue when it comes to plants. I presume I have seen European Honeysuckle back home, but I just can't remember and therefore tell you anything about it.

So yet again: sorry to disappoint.

To make up for this, here are a few links to other pictures of orange-tailed Cedar Waxwings, significantly less blurry and grainy than mine:

Of course, the possibilities of the Honeysuckle were soon also discovered by other North American bird species. This fits my assumption quite well that other less attractive species thrive to obtain the same amount of affection from birdwatchers/ -photographers as the Cedar Waxwing by copying its appearance. As always, Julie Craves proves to be an excellent source of information regarding anything that is related to birds in North America, and here is a very nice link to something she wrote about an orange-lored White-throated Sparrow.

Intriguingly, she mentions the Asian "Morrow's Honeysuckle" as the culprit messing up American bird pigmentation, but as this would completely spoil the title of my post, I stick to Cornell, even though I tend to put more faith in Julie being right, quite frankly.


I will miss the Arb back home in Germany. There is always something unexpected to keep you entertained and you never know what you're gonna get. Like a decent box of chocolate.
Posted by Jochen at 15:37

Yay! Jochen is still alive! And I'll be following you to Germany...the wedding I am attending is the 13th of October and I'll be in Germany for several days after so I hope you have some good birds for me...

See you there and there'll be so many good birds around in October (geese, cranes etc.) that you'd better have a very good reason to return to the US, because you'll not want to!

I think we should all make a vote.

Who wants Jochen to stay?

my vote is "stay"!!!!!!! afterall, we did not find yet my burrowing owl in michigan

funny, a common nighthawk is calling just as I am typing........

Hi,We knew each other a little back home in Germany, but I only "discovered" you (your blog) when starting blogging myself in Mongolia (http://birdsmongolia.blogspot.com). Strange small world. I'll leave for Germany at the end of the year too, and I hope that there are some lunatics out there who would vote for my stay... I'd definitely vote for you to keep on blogging from the other side of the Atlantic...

Jochen, you are going to visit us NYC first, right?

If we're putting this to a vote (as if we had any way in the matter) my vote is for some high quality bird blogging in Germany. Some excellent birders remain to chronicle avian excitement in Michigan while at last the birds of Bundesrepublik Deutschland will be made known to those of us languishing in the New World.

Happy trails, Jochen! Are you keeping the Bell Tower name?

Axel, I am sorry to hear you're leaving Mongolia. What a loss for that country! I one day want to go there to look at the white-headed Yellow Wagtails, as pipits and wagtails are probably my favourite bird group (and I have missed them here in North America).

I'll certainly maintain my blog Belltower Birding in Germany and hope Axel will also start a German bird blog so it's not quite as lonely out there...

Mike, this time 'round, I won't make it to New York. But there'll be other times, and this is best discussed during your visit to the Baltic coast anyway... You are planning to, aren't you?
And sorry about the vote you lost. I might be blogging in Germany, but "high quality"? That'll never happen...
I am also looking forward to introducing birding in Germany to a wider audience, if ever I attracted one. But we'll see, there's lots of Belltowers in Germany as well and I still have 2 months here anyway!!

So happy birding to you all!!