The Bell's Vireo - one of my main "target species" or rather one of the species I had sincerely hoped to see - had been very easy once I had gotten into the right habitat. This habitat however had been just a large expanse of fallow fields with a few bushes and not the precise reason one might consider driving 8 hours for if one is not a birder but a person in their right state of mind.


Lifer No. 4: Mississippi Kite
The next day was my third day in St. Louis, my second day birding there and I had not really been on the banks of the Mississippi yet, in those surely overwhelming lowland forests of this most majestic of North American rivers, a wilderness that was even a former haunt of the Ivory-billed Woodpecker, so it must still be overly impressive for sure. And you know what? Chasing after birds certainly is a nice thing to do, but some landscape elements should also be taken into account when traveling, and so I decided to head for the Mississippi valley on this second birding day.
Okay, of course I was hoping to find a few lifers there as well, like Mississippi Kite, Fish Crow and Yellow-throated Warbler. But experiencing the wild side of the Mississippi was surely going to be an immensely satisfying adventure as well.

Well, you see, the Mississippi valley around St. Louis ... how shall I put it ... might indeed be more comparable to New York City's Battery Park than the Bayou deView or Cache River, if you know what I mean?
To say I was disappointed would be a bit harsh, but honestly, I was.
Anyway, after a bit of driving around and searching for anything even remotely similar to a natural landscape, I finally got to the so-called Horseshoe Lake, one of the prime birding destinations of the St. Louis Area.
A small cut-off section of the lake was drying out or rather the water was being pumped out and what was left was a huge mass of mud, puddles and dead/dying fish, bordered by reeds and cattail.
The smell itself was already an experience for itself that is not easily described, but the assembly of wading birds was truly outstanding, and I am dead serious about this: unimaginable if told, barely realizable when seen.
Here are my rough estimates:

Add to this around 300 Pied-billed Grebes in a tight flock and 26 American White Pelicans and the smell is barely noticeable anymore.

Oh, I see you raising an eyebrow in disbelief, surely it was the heat and the foul smell of rotting fish that hindered my realistic perception, you are thinking?

Seeing is believing, I know, so here are a few images of the scene, sadly taken against the light... 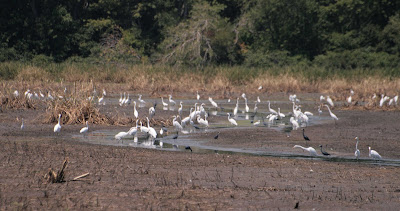 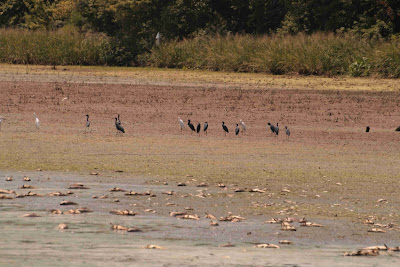 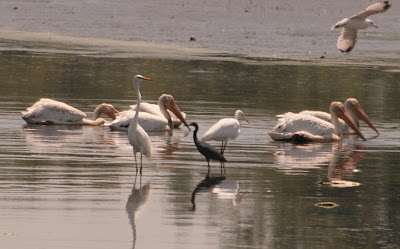 Florida? Where's Florida and who needs it anyway? 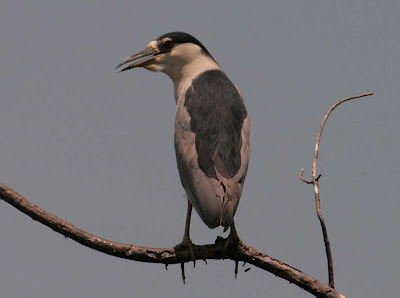 Black-crowned Night-heron, not liking the heat - or was it me? 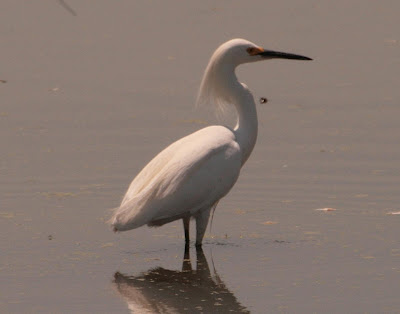 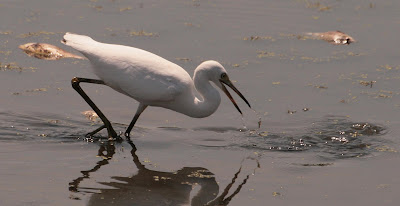 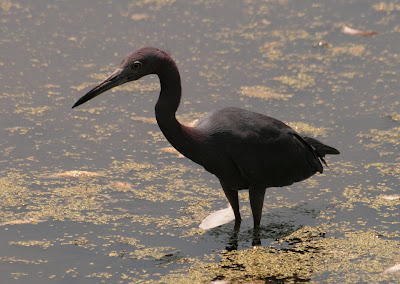 Adult Little Blue Heron, this time with a decent hair do
It had been a nice day so far, and no doubt about that, but even though seeing 250 Little Blue Herons when you've only ever seen one before was rather pleasing, it wasn't precisely like seeing a new species. And search and seren... pity-me, there was neither Fish Crow (despite all the dead fish!) nor Yellow-throated Warbler nor Mississippi Kite around.

Good thing I had been given the St. Louis guide to birding sites. So at the end of the day before I had to return to the hotel, I consulted it again and shock and awe: Mississippi Kites - it read - were frequently seen over suburban areas of St. Louis, e.g. over University City.

Not bad, as this part of town was right in between Horseshoe Lake and the hotel I was headed for.
So I turned off the highway onto one of the smaller roads leading through University City, checked the sky and after about 30 seconds was treated to this: 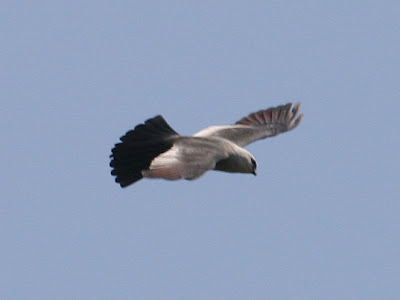 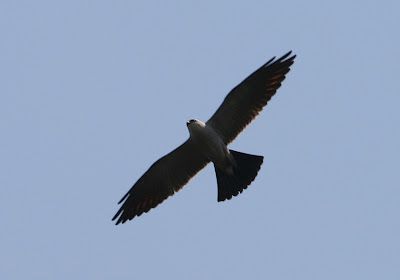 After a bit of a struggle at first, it had been easy again.
I like it when a plan works out.
And I particularly liked the shape of the Mississippi Kite's tail.
Posted by Jochen at 20:32

Wait, did you just use my name as an expletive? Hmmmm.

It's fun to read about your adventures in what used to be my home state. I'm glad you got some good birds, but sadly, the wild, mighty Mississippi is little more than a memory. Dams, channels, urban sprawl, and agriculture have seen to that.

Any chance you can visit Texas before you go home?

Hi David,
yes I noticed lately that Missouri is your home state!
It was such a pity about the Mississippi, but mind you, I grew up on the Rhine which is one of Europe's largest river, and the Rhine is even worse, like a long, long concrete bath tub, hardly any natural banks at all.
I'd love to visit Texas but that'll have to wait until some other time, on a holiday from Germany. Right now the whole focus is on returning there and settling in again.
However, I'll let you know when I visit Texas, that's for sure!
Cheers,
Jochen