Test the West around St. Louis

Two years, that's quite a mighty long time actually, but if you quickly check your map of North America, you will not fail to notice that basically all of this time has been spent in the same corner of the continent: the North-East.

It is getting quite difficult for me nowadays to still see new birds around here (about which I am not complaining) but I have noticed for quite some time now that those bird names I have on my life list are quite uniform with regard to their geographic description. Here are a few examples:

Spruce but not Sage Grouse, Cape May but not Colima Warbler.

What I think about this?

I'll give you one more bird name: Mourning Dove!

But then came the short trip to St. Louis!

I am talking about this little bird here: The Western Kingbird.


Lifer No. 5: Western Kingbird
The normal range of the Western Kingbird is quite a bit to the West of St. Louis as can be seen here, but there has been a small breeding population around the city for quite some time now.
And the temptation of seeing something that bears the word "Western" in its name was too much to resist: that guy was on my most wanted list for sure!

An inquiry on the local Missouri birders forum was met with a precise description by Mike Grant, and I sincerely hope a few Sharp-billed Sandpipers will fly his way this fall:
A pair with young had been seen on the utility wires of a nearby Municipal Athletic Complex, a mere 10 minutes away from my hotel.

Well, as the title has already revealed - or rather has never helped in concealing - I drove there first thing in the morning of day three and found it.
One bird, with another one calling nearby, were found and have thus taken their place in honour and glory on my life list, the great first "Western" North American bird species to have achieved this mile stone.

Okay, it wasn't too easy as I actually had to drive around the athletic complex for five, maybe ten minutes until I found it, and it was indeed on the last stretch of utility wire, so I did feel a certain amount of anxiety until it appeared, but yet again, seeing it was pure decadency and I was starting to feel a bit guilty about not having to work hard for a lifer.
I will however get back to this particular topic later.

Looking around, it was easy to see why the Western Kingbird had chosen this particular stretch of landscape. 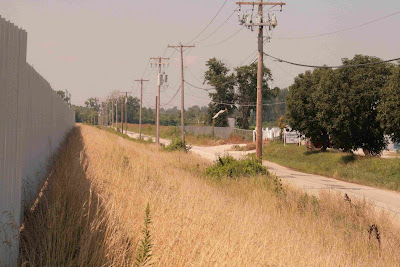 Couldn't this very easily be part of California's Central Valley, with a few Yellow-billed Magpies just around the corner?

It sure felt very Western to me there between the fields and the athletic complex.

And here finally are the pictures of this very magnificent creature.
I do like it when birds not only appear as I had planned them to, but when they also pose like this for a few nice pictures.
Decadence all around... and beauty. 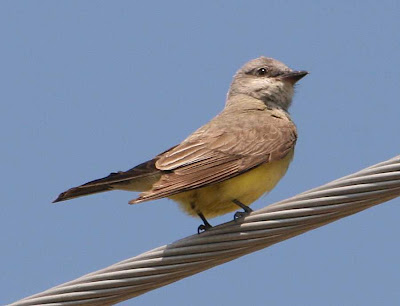 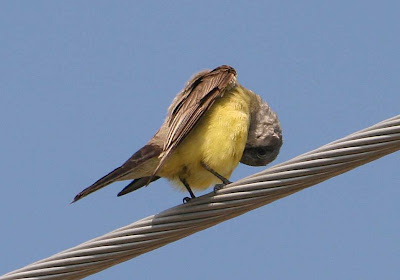 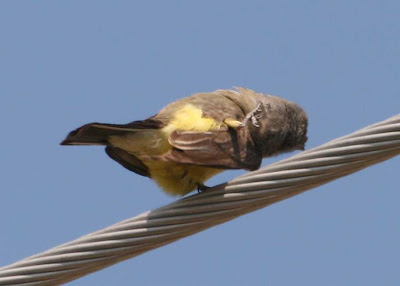 This, again, is how not to scratch your ear if you're not a Cardinal or a Kingbird but an airline employee
Oh yeah, in the background around a few greenhouses, there was also a bunch of Eurasian Tree Sparrows.
Thought some might be interested, but I'll soon see plenty of those again.
Posted by Jochen at 00:34

Interesting?
I give you one more name: Dendroica fusca!
Blackburnian Warbler!

Just compare that bird to that name!

But did you see the best birds in St. Louis? The Redbirds? The Cardinals? The defending World Series champs?
Sigh...you aren't a baseball fan are you?
Loved the post!

Well, honestly Corey, Baseball is purely and solely an American Sport. I don't even really know the rules, let alone can tell who is playing well and who isn't.