I am mostly glad to live in a modern, advanced world. Sure, the times when Africa was still largely unspoiled by European "discoverers" were surely nice, or the times when all you had to do every few days was go for a walk with your buddies to hunt mammoths. No office hassle, no stressed out wreckage on a jammed highway trying to make it to work on time and all these other nasty things modern times are tied to. But honestly, could you say farewell to so many of civilization's wonders for the sake of a less stressful life?
And if your answer is yes, how certain are you you're not going to regret swapping with a cave man?

Don't you think those ice age hunters 10,000 years ago would not have liked to sit alone on a hill, wind in their face, overlooking the plains in front of them and then take out their thermos can and have a nice zip of freshly brewed coffee? Sure beats cold muddy swamp water if you ask me.

Oh, but coffee has been around for ages, right? At least in Ethiopia, it's been known at least since the 9th century, so it is not something we can freely attribute to modern times and therefore it is not suitable to demonstrate the advantage of today over yesterday. So wouldn't it be much nicer to live somewhere in the - say - 12th century and have the advantage of drinking coffee plus a general lack of modern nervousness?

Yes, many of us - possibly even the majority - enjoy their coffee with a shot of milk or cream. And this was quite a difficult thing to do in the times of old. There were no fridges, no cans of condensed milk and surely there was no powdered coffee creamer.
Imagine again those ice age hunting parties: do you think it was practical for them to take a cow along on each hunting expedition? Might have earned them a but too much attention from the local pride of sable-toothed tigers.

No, I tell you, coffee creamer is a true modern wonder that has changed the world.

Here we see a prime example of a classic Coffee Creamer. Small, light, convenient and sure not to turn into cream cheese if you're out in the sun for longer than you had expected.
What an advantage! 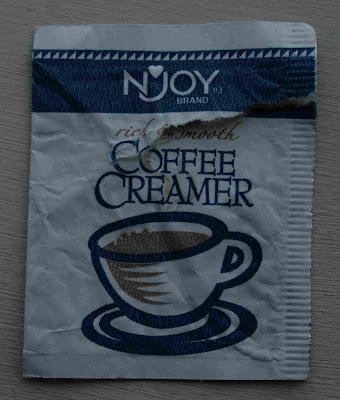 But here's the best, if we turn the paper bag around and take a look at the ingredients: 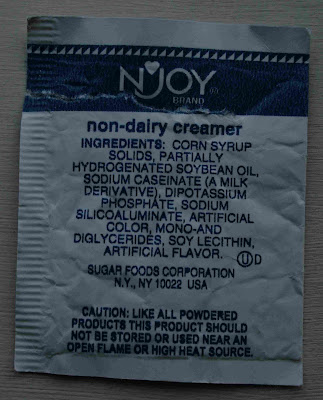 Oh wonderful progress of our food industry! Now we don't even need milk anymore to put some cream in our coffee!

There's modern marvels even in the smallest things.
Posted by Jochen at 16:34

I love my coffee black, and I still wouldn't want to live in the 12th century. I am inordinately fond of running water and indoor plumbing, not to mention living past 30.

I have never been a big coffee drinker but I do love my milk with my Hot Chocolate! Very interesting post for sure!

Hi Wren - lucky you, drinking coffee black. I still carry a small cow in my backpack each time I am off chasing/watching birds... You last point, about the life span, is a vital one (literally), but I have lived in a very, very remote area of Namibia without plumbing and running water and must say it was still the best time of my life (the rest of Namibia has a standard comparable to rural areas of the US, so it's still a fine country). In Germany we have a saying that roughly translates to: ""If you want the one thing, you have to like the other", meaning that if you want to have a great natural surrounding, you have to like a certain amount of discomfort.
But honestly, I'd also opt for short time tours...

Hi Mon@rch!
I once quit drinking coffee for about three years but wanted a substitute for it in the form of a creamy, warm drink (tea just wasn't doing it). I then learned however that all the other options were even less healthy (e.g. in most instant hot chocolates is a certain poisonous fungus) and so I returned to coffee with fresh milk (although I tend to drink more decaf these days...). But I do love Hot Chocolate, well, anything that's got chocolate...

Corey, I am so glad you share my cravings for sodium silicoaluminate, but honestly, the best-tasting ingredient must be dipotassium phosphate.
You gotta love it!