The One I Deserved: The last of the St. Louis lifers

As I have mentioned in a recent post, I prefer to see all the specials of a particular area instead of striving to add as many species to my list as possible, and to me these special bird species - but of course all of them are special in one way or another - are species one is most / only likely to encounter in that one particular area. Now, the Heartland of North America only harbors a limited number of these special birds as most of the local breeding species can be seen further South in winter or also occur at more popular birding destinations.
Let's be honest here, I thoroughly enjoyed Missouri. But once I am back in Germany and birding in North America will mean a somewhat costly holiday, I am more likely to consider trips to Colorado, California, Arizona or Florida (and of course upstate New York) than to, say, Kansas or Iowa.
So now that I was right in the central part of the Continent by lucky chance, I tried my best to see the two birds most special to that particular area. These two bird species can actually be found over much of South-Western North America, but the forms occurring in the central part seem rather distinct and, with today's approach to taxonomy, might be viewed differently in the near future.
Of course I am talking about the eastern/central forms of Bell's Vireo and Bewick's Wren.

Bell's Vireos had been easy enough as the local birder's guide gave quite detailed descriptions to good sites. This was however not the case for Bewick's Wren, and the species therefore was my main reason for temporarily joining the Missouri bird forum and ask for help and assistance.
Sadly I got no response regarding Bewick's Wrens and remained clueless on the morning of my very last day birding around St. Louis.

Okay, I had been given directions to a Western Kingbird and had looked up a nice site for Yellow-throated Warbler and Fish Crow, so I had a few nice plans for the day. However, these were species I could probably encounter in other parts of the country I was more likely to visit in the future, like Alabama's Dauphin Island or California. But the Eastern form of Bewick's Wren?

So I sat there in front of my laptop in my St. Louis Hotel, ready to hit the road to the Western Kingbird, and knew that I had to make a plan all by myself.

In a last desperate attempt I googled "Bewick's Wren Distribution Missouri" and got to this link.

It clearly had to be the West I should head for, but it didn't look very promising to be right at the edge of its Missouri range, where there had only been between 3 and 5 encounters out of 100 "stops", statistically.

I checked the St. Louis birding guide and the only birding site in the South-West that seemed fit to potentially hold the Wren was ... Shaw Nature Reserve, a place I had been to 2 days earlier.
Therefore, I quickly scanned through the Nature Reserve's checklist I had bought but not read yet and Bewick's Wren was actually listed as an "uncommon" breeder. The fog was starting to clear and I could sense some light.

Now, Shaw Nature Reserve is so small that "uncommon" can't mean anything else but less than a handful of pairs, yet it is big enough to hide these pairs quite well.
I therefore had to get more information on its habitat to narrow down the possible corners of Shaw's Nature Reserve worth searching.
So, again, I returned to this wonderful link and found the following description:

Trying to remember what the different parts of the Reserve had looked like two days ago (and were probably still looking like now), I came to the conclusion that I would spend my last few hours of birding in the woodlands just above the slope towards the lowland forests. Some parts of these woodlands had been cleared recently by park staff in an effort to restore native habitat and I figured that these open scrubby areas were my best bet.
The plan was made:
1. Western Kingbird
2. Castlewood Park
3. Shaw Nature Reserve

After successfully ticking off the first 2 point of my day's checklist I arrived at the parking lot just next to the cleared woodland areas of Shaw Nature Reserve, with about an hour left for birding until I had to return to the hotel.
I surely thought I had a certain chance, but my luck had to run out at some point and I had this nagging feeling Bewick's Wren would be it, the precise point at which my luck was bound to fail me.
First, I walked a short bit to a nice view point over the surrounding areas and scanned for the part I thought was best (seen below on the left). 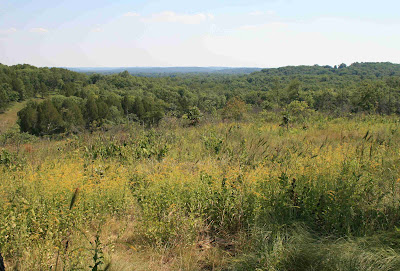 Feeling satisfied with my choice, I started to walk to the target area, which took about 5 minutes, probably less.
Arriving at the edge of the target area I turned off the main path onto a small track, walked another 10 metres and spotted some movement in a scrubby patch 15 metres away, a brownish and long-tailed bird, surely a Field Sparrow.
I waited patiently and calm (as I always do in situations like these, like any other birder) for about 20 seconds until the Field Sparrow reappeared: dark brown above and heavily barred in parts, paler brown below, whitish supercilium, slender and slightly down curved bill, very long tail with small white tips.

I was left with three choices regarding its identity:

Call me a stringer, but I opted for Bewick's Wren, two of them to be more precise, an adult feeding/attending to a young bird.

Here are a few pictures, taken at a considerable distance and heavily cropped, so they are really bad, but they might allow those in favour of a House Wren X Gnatcatcher hybrid to summon more arguments for their case. 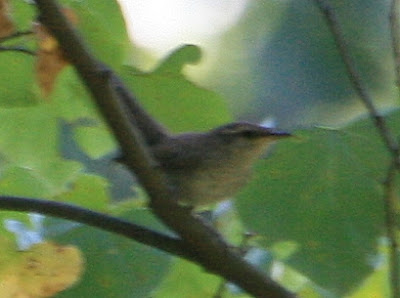 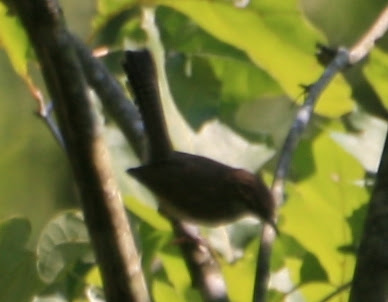 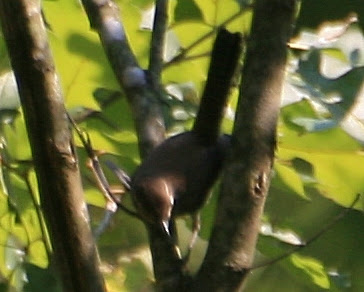 And then something remarkable happened. As I was approaching the birds to get better pictures, my camera switched off. I had been so busy birding lately that I had forgotten to recharge the batteries, and right there, in front of the Bewick's Wrens, the batteries were goners.
Now, you might think this upset me, or the fact that I had a Red-eyed vireo perched at eye-level 3 metres besides me for prolongued periods on my way back to the car, but I was actually somewhat happy:
This - the Wren - was a species I had searched for so intensively, wanted to see so badly and felt so happy to see that I really didn't mind not being distracted by trying to get the perfect picture.
Instead, I went for the perfect observation and just looked at it, soaking it in.

What a fabulous bird!
Posted by Jochen at 20:14

"What a fabulous bird!"

Oh, I alway knew it, but it was nice to see it was even better than I had anticipated!

Wonderful account! I always enjoy your birding tales--in this one I especially like the observation that the nature reserve though small was large enough to conceal a handful of breeding pairs of wrens--a lilac hedge is large enough!

Lovely that you got to see the birds in the end. Good birding, that.

Hi Mon@rch!
Yes, a truly awesome wren. Sibley paints it as a slender, long-tailed version of Carolina, but I have found it very reminiscent of a long-tailed House Wren, so I was really amazed! It seems - just like me - you've also mostly birded in the North-East? This is what made St. Louis so exciting for me, apart from a few lifers: to see north American birds in a completely different context, e.g. in different relative abundance, different habitat etc.

Hi Pamela,
so glad you enjoy my birding tales! And you're so right about a hedge being enough for a few wrens to hide in, they are tricky and smart, and they may be small but they might be giants.