The letter 'N' is one of the more peculiar of the alphabet's letters in that it is a very social one. It is used - at least in English - to form a connection between things that are either dear to us or go together well.
Oh sure, you need a few examples or you won't believe me.

Okay, we all remember that the slogan "Sex 'n' legal Drugs 'n' Rock & Roll" has shaped the lives of a whole generation and that "Sex in addition to legal drugs when combined with Rock & Roll" would not quite have had the same effect.
Or - to stay in the same basic area - the best band in the world surely owes part of their success to the fact that they combined two things that go together well with an 'n': Iro'n'Maiden!!
Very smart!

Ha, ha, you think these examples are a bit far off reality? Then look closer, you won't even have to go beyond your local bar or rather pub:
We all know that Pi equals 3.14159 and that 't' is a very birdy letter (as seen in Tufted Titmouse, Gray-tailed Tattler etc.) but rarely realize that a combination of the two by the letter 'n' will lead not only to a very enjoyable means to measure volume that shouldn't be sported on a car's license plate... 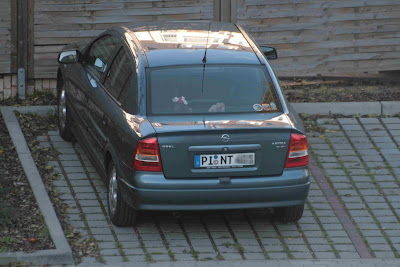 ...but is also connected to one of the most pleasurable ways to enjoy our hobby: Birds'n'Beers.

And what's a beer to a birder is an apple to a bird.

Yes, indeed, birds generally enjoy a good and decent apple once in a while, as I was able to witness during my last days in Michigan's Ann Arbor at the nearby Briarwood Mall National Parkinglot.
This in itself might not be so interesting, but Bell Tower Birding always thrives to provide a perspective upon bird life beyond the obvious, and the way birds approach the eating of an apple is a means to take a closer look at bird evolution.

We start with the Anatidae (the family of ducks, geese and swans) and observe the way a Canada Goose tackes an apple:

A Canada Goose will first push and roll the apple around a bit and it looks as if it was making a smart plan on how to best eat it with such a flat and funny bill... 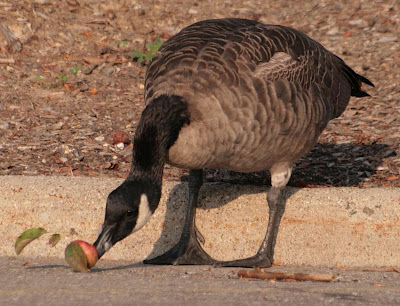 ... but I think it simply has no clue how on earth this thing can be eaten.

So the goose just tries to grab any part of the apple... 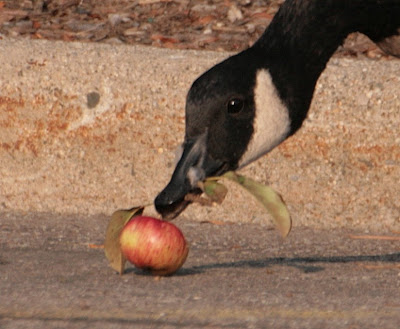 ...which incidentally happens to be the least edible one and we can even see the steam from the upcoming inner rage escape its nostrils.
Now, however, the goose is given a well-meant clap on the back by natural selection as the anger and frustration about the uselessness of its own bill regarding apples will lead it to take the apple and shake it until the edible part breaks open. 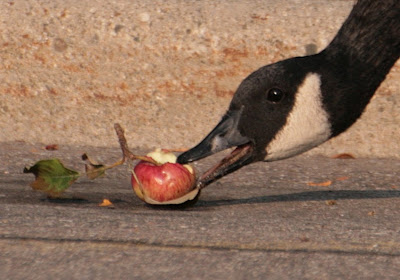 Well, neither a smart nor an elegant way but successful in the end, as was to be expected from such an old and ancient group of birds. After all, had the Anatidae been as stupid as we initially thought, they wouldn't still be around, right?

The Laridae however are a more flexible and adaptive group of birds. It seems they have evolved beyond the clueless state of the Anatidae by approaching an apple with direct aggression. Their bill is adapted to effectively eating an apple as the hook is suited to run it through and pick it up ... 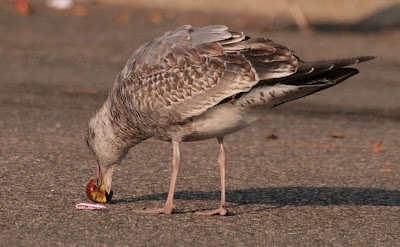 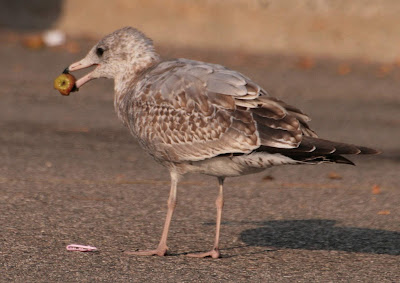 ... while the sharp mandibles are brilliant to just tear the fruit apart. Notice that the bird above preferred the apple over a pink barrette, clearly identifying it as a young male.

The remains of the apple then get a little toss, a free flight ... 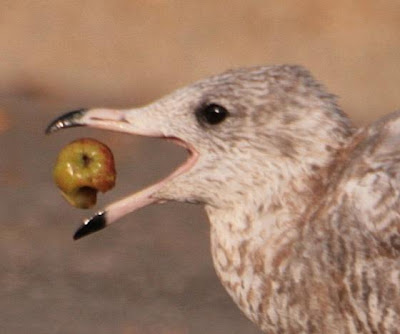 ... and down it goes. This is surely a more effective way to eat an apple, but it is still far from stylish. An inconvenient truth some gulls find hard to swallow.

If then however we turn to one of the more recent bird groups, the songbirds, we will find the highest adaptation to using apples as food. Not only have they discovered that apples on trees are fresher than those below them, they have also developed the most intelligent method of eating an apple.
This is nicely demonstrated by the House Finch seen below. 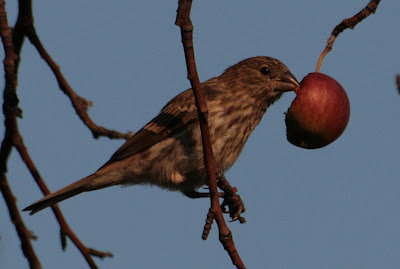 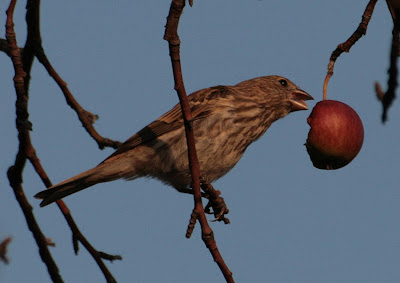 "Well, not very much longer..."
It is generally thought that the songbirds have adapted best to using apples as food.
In my opinion however, this is a mistake.
I give you one word: Raptors.

Oh, yes, we all think raptors are greatly adapted to hunt down meat and will not readily take to eating any vegetable matter. One example are the Ann Arbor Peregrines, shown well in this nice gallery. Their food has been investigated thoroughly by collecting all avian remains from the bottom of Burton Memorial Tower and the results of this study can be found here.
Oh, you only find birds on that list and no fruit?
You think that proves they don't eat veggies?

Ha, to my eye, this whole approach is tainted by our expectations and the results thus cannot be taken as representative of the species' ecological range. I have - naturally - conducted my own bit of citizen science on these falcons and here is what I found.

Way up on the tower is a majestic Peregrine, the fierce male of the pair. 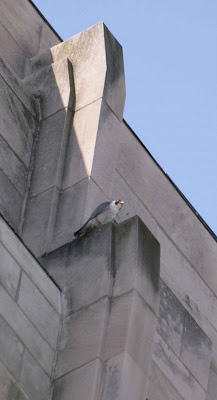 Way down below are what remains of a good Peregrine snack. Whitewash, a feather of an unlucky Yellow-billed Cuckoo and ... 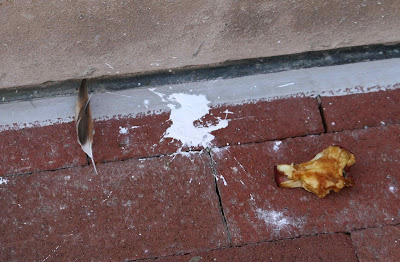 Great photos, especially the goose. I hope you're sending to IATB.

Hi Wren,
thanks!
Yes, that's my contribution to IATB (I have been neglecting IATB too often and have promised myself to be more alert).

The German word for "Goose" is "Gans" and we call "Canada" "Kanada", so very conveniently the Canada Goose is called Kanadagans in German.

I wish it was always that easy. It isn't. The gulls are especially tricky.
Your Herring Gull is our "Silver Gull" (Silbermöwe) while our "Heringmöwe" (translates to Herring Gull) is your Lesser Black-backed. And while you use "Black-headed Gull" for Larus ridibundus, we call the Mediterranean Gull "Schwarzkopfmöwe", which translated means "Black-headed Gull".

So to simply translate German names to English or vice versa may lead to tricky situations.
Cheers, Wren, I now have to rush to your blog and see if you have posted anything new (for IATB)!

You're just ever so slightly insane aren't you (which is a very good thing for a blogger to be IMHO):)

such an interesting post you did on the apples1 thanks for the smiles!

Great blog, well done. I've been reading your blog for some time now and when I finally took the plunge into blogging I added your blog to my essential reading list at www.owlbox.blogspot.com

Keep up the great work.

I don't now how I missed this post. A nice collection of apple eating photos! Imagine a Peregrine the size of an Ostrich I wonder what it would be eating?

Hi Larry!
I suppose a Peregrine the size of an Ostrich might go for water melons and swallow the whole?
But just imagine the "whitewash" below the tower if Peregrines were that size!

I must digg your article therefore more folks can see it, really useful, I had a tough time finding the results searching on the web, thanks.

hey your blog design is very nice, neat and fresh and with updated content, make people feel peace and I always like browsing your site.