I had mentioned before that I felt this was an age of re-inventions and that I, too considered it necessary to frequently take a critical look at my blog's content and direction and see what could be changed and improved.
This post is an attempt to provide my dearest readers with yet another fundamental change, a true Bell Tower Birding revolution:

I have decided to write something useful.

Oh, please, remain fair, I didn't say this post was going to be useful. I wrote it is meant as an attempt!

Get on with it, I think I hear you, so here goes the birding part.

The identification of Catharus thrushes (including the Wood Thrush as it sometimes is included in the genus and sometimes not but is a bird too neat to be left out) is simply a superb task:
challenging and interesting yet not impossible.

The differences between the species, most of which have several subspecies, are quite subtle and I have often asked myself how one could possibly ever identify a hybrid in the field and if such hybrids are known to occur.
The most recent case in which I considered the possibility of a hybrid was a strange immature thrush Charlie observed in New York.
I am sure you know the story and even though Wood Thrush was to be considered, the bird was widely thought to be a Hermit Thrush of a more Western origin.
One thing that finally convinced me that the bird was a Hermit Thrush was its wing pattern.

But aren't the main field characters the exact head pattern, the amount of spotting on the breast and the colouration of the tail?
Yes they are, but there might be more.

I am aware that I will venture out upon thin ice now and I am neither an identification expert nor someone with excessive field experience or access to a multitude of museum skins. Nevertheless, I have come to notice something that might work as an additional identification character for Hermit Thrushes and that as yet I have not found in any of my bird guides.
Surely I am not the only one who's noticed it and the reason for not finding it in any of the guides is that I have only the "rough" and general guides and no special identification literature.
I expect this to be yesterday's news really, or rather "cold coffee" as we say in German (I told you: the culture thing), but I hope some blog visitors might get a chuckle out of reading it and that'll be good enough for me.
Oh, and before I start: this whole post is only about the thrushes one might see around the Great Lakes, no idea how it would work out in the West!

The wings of most Catharus thrushes are quite uniform and show the same shade of brown as the back and mantle.

Here, for example, we have a nice and lovely Swainson's Thrush. 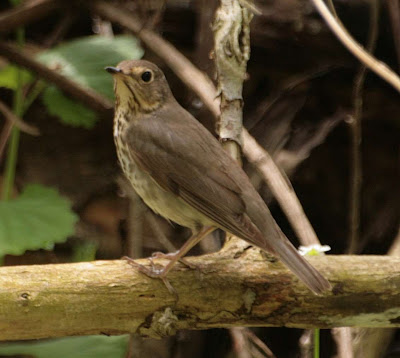 See what I mean? No contrast on the wing at all. Okay, if we look closely, we might notice that the tips of the primary coverts are slightly darker, forming a miniature dark wing bar, but this is nothing obvious or striking.
This uniform colouration is even more apparent in the Gray-cheeked Thrush (presuming it is not a stray Bicknell's we're looking at, a rather safe assumption around the Great Lakes I shall say) 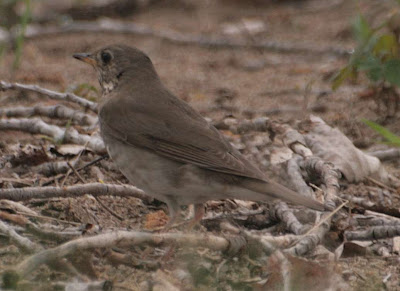 Just a brown bird, no contrast, not much pattern at all.
Hey, this is still a very nice bird!! Just thought I'd mention it, in case anyone got a different impression.
The Wood Thrush is right on the other side of the scale of different shades of brown, but nevertheless shows a very reduced pattern on the wings. Basically the whole wing looks like the back and mantle, with only a slight dark bar formed by the tips of the primary coverts.
Here it is, my only picture of a Wood Thrush, and that stick right across the tip of the primary coverts, well, very useful indeed ... 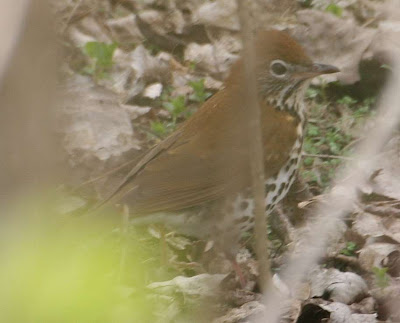 Now we get to the equally lovely Veery and hurray, some form of pattern starts to show on the folded wing. The Veery also shows the aforementioned dark bar across the primary tips but there is also a slight pattern at the tip of the primaries! The tips of the reddish brown outermost primaries show a decreasing (towards the body) amount of dark brown which produces a distinct pattern at the tip of the folded wing, beyond the tertials. Furthermore, the secondaries are slightly duller than the bases to the primaries, producing yet another slight contrast on the folded wing.
Here are two rather bad pics of Veeries to demonstrate my point, the best I got in 2007, and please no complaints here in public. 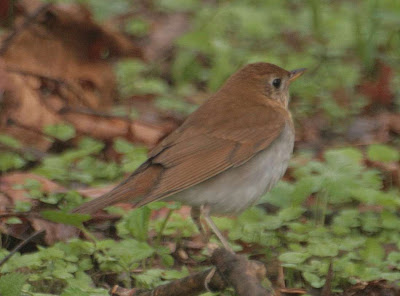 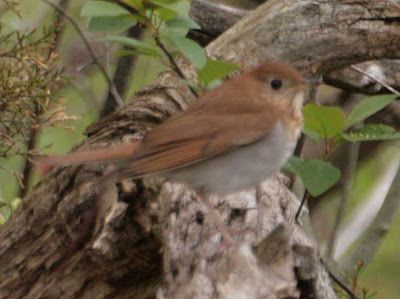 Still unsure as to what I am talking about? Yes, this primary pattern is pretty hard to see on a Veery, so never mind.
But now finally we get to the Hermit Thrush, which has mastered this pattern to the fullest. Here's a cropped version of a Hermit's wing, and the red lines and arrows indicate all those neat contrasts I was trying to convey before when I was writing about the Veery. 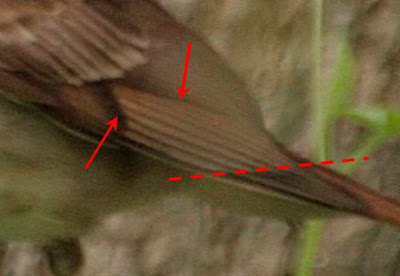 A rather distinct patterning of the folded wing seems to be unique to Hermit Thrushes around the Great Lakes and might serve as yet another supportive character to identify tricky individuals as Charlie's bird from New York City's Central Park.
To sort of prove my point, I have added 4 images of Hermit Thrushes taken last May at Crane Creek, Ohio. All show the contrasting wing pattern quite neatly. The last two pics are of a bird Laurent and I had struggled with for quite some time as it was unusually dull, the reddish tail wasn't as reddish as one might expect, the spots on the breast seemed rather strong and an eye ring was basically lacking. Nevertheless, we were finally able to confirm the bird's identity as a Hermit Thrush by - amongst others - the tail movement and the wing pattern.
Of course, it could have been some crappy hybrid or Western form, who knows, but that's beyond the scope of a blog post anyway. 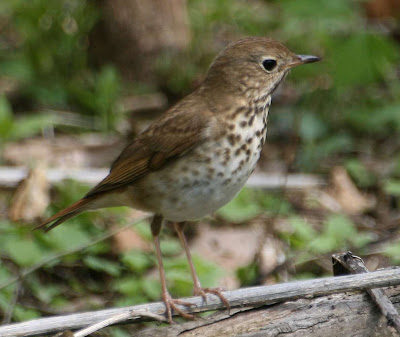 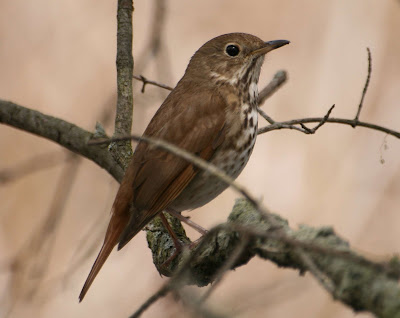 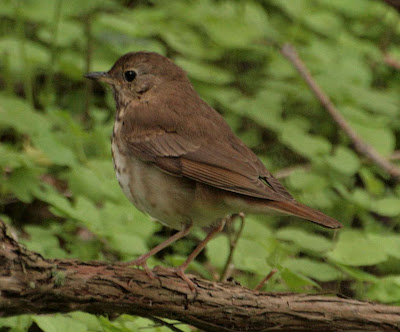 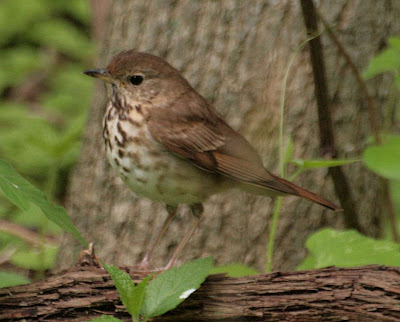 Feel free to comment or point out images of other thrushes that also show such a pattern to the folded wing.
Birding is one huge process of constant learning. Please, provide!

I'm off to the museum to look at gulls this afternoon, perhaps I'll have to take a look at thrushes too...

very interesting for sure and next time they return, I will try to look closer at this while holding them in the hand (while banding)!

Interesting indeed. I'll be sure to look for this mark on all the HT's I see.

I see what your getting at, but it's going to take some sleep and a good cup of coffee to get the whole picture.

you know I'd noticed something similar but hadn't put it into words. I often look for the contrast in the wing formed by those primary coverts, but not having enough experience of the other Catharus thrushes was never sure how valid it would be as an ID feature. excellent idea - look forward to someone running with it...

Thanks for the interest!
I sure hope that it really works and wish I had a chance to test it extensively out in the field next May.
Hmmm, not expecting LARGE numbers of Catharus thrushes in Germany, I guess. Now that I think of it, I don't even know if there were any during this or the 20th century although we do have quite a few old ones (1800s)...
And Larry, these are the things you notice while under the influence of heavy drugs. Not the legal/illegal ones, but the endorphines caused by watching so many thrushes (and warblers) at close range around lake Erie (Point Pelee, Rondeau PP, Crane Creek etc.)!
That sure helps a lot, not only in noticing a few subtle features but also coping with the lack of sleep, food and the back pain caused by constantly scanning the upper canopy for warblers...