The winter of 2005/2006 started out in a rather ordinary way here along the German Baltic sea coast. November had passed, fall migration had basically ceased and everybody - well, maybe not the general public but those who truly matter: the birders - was awaiting the influx of the winter birds from Scandinavia.
Around the end of the month though, things took a sudden and unexpected turn: Redpolls!
Well, Redpolls aren't very special around here. The central/western European form cabaret has recently colonized this part of Germany and breeding pairs are now frequently seen in gardens and cemeteries all over the place. Each winter, small flocks of the northern flammea are also regulars, usually numbering in their 20ies or 30ies and even though you won't see them each day you're outside, they are around. The winter of 2005/06 however saw an influx of Common Redpolls the like I have never experienced up here. Redpolls were everywhere and even though most flocks were below 100 birds, some exceeded 300.
Very neat.
Then it happened: neighbouring countries, like Denmark to the North and Poland to the East started to report relatively high numbers of Arctic Redpolls within these flocks of Commons and once reports came in from the Netherlands to the West, it was clear that we, too were being overrun by Arctics. Problem was: no reports yet.

How could that be?

Arctic Redpolls are a very rare species in Germany. As a matter of fact, they are really rare. In most years there won't be a single acceptable record and every second or third winter might lead to one or two birds being reported and approved of by the records committee. And that's even an optimistic guess. So my optimistic guess was that none were reported from here not because the species had decided to avoid Germany of all the European countries but because people were seeing but not recognizing them.

All of a sudden, I was a man on a mission.

I ordered all the identification articles I was able to find out about and spent hours and hours in front of my laptop searching for and studying pictures of all sorts of Redpolls. Finally, I felt I was ready and I took my theoretical knowledge to the test: I went out in search for Redpolls.

Okay, I'll cut it short to get to the main point of my post: in the following three months, I studied a total of well over 1,000 Redpolls and found no less than a minimum of 6 Arctics, which might be a record number of Artics found by a single observer in one winter in Germany. So it was pretty good fun.
Yet again, though, there was a problem: back then I didn't have a camera and my digiscoping equipment was horrible, so I had no definitive proof of my "claims". Surely I had told other birders of the Arctics but very frequently, these observers would look at the same flocks the day following an Arctic observation by me and not find the bird amongst the commons. Yet again, I felt, they were seeing but not recognizing!

So what is the problem with identifying an Arctic Redpoll?
The problem seems to be that it is so bleaking similar to the Northern flammea form of the Common Redpoll that even when you look at an Arctic amongst a flammea flock, you don't have that certain light bulp moment kicking in.
You see, when you check through one Warbling Vireo after another in search for a Philadelphia, you go through all of the subtle characters on each bird and often have these moments were you think that this particular Warbling somehow looks different and might show traits of a Philadelphia. So you struggle, and check again, and don't really know what to think of it. But the moment you actually find a Philadelphia, it is plain obvious, bam, there it is, clearly a different species and no mistaking it!
This is not the case with the Arctic Redpoll. Identifying an Arctic Redpoll completely relies on checking a few key field marks but even when you have established that a particular bird simply must be an Arctic, it still doesn't feel like a different bird species amongst the Commons, it just looks like a subtly different bird of the same species.

Therefore, preparation is everything.

And this is something Sibley knows (again!) as well. He's written a short - and I hope he'll extend it like he did on the "Great White" Heron - post on the key identification criteria here to get North American birders prepared for the Hoaries or rather Arctics headed their way. And it seems we might also have another Redpoll invasion this winter here along the southern Baltic coast...

First up, though, there's a need to clarify the taxonomy we are talking about here.

Currently, the Redpolls are divided into three species (two for the more conservative taxonomists):

2. Common Redpoll Carduelis flammea, with three subspecies: islandica on Iceland, rostrata on Greenland and flammea from Scandinavia all the way East to Northern North America.

So when North American and European birders are searching Redpoll flocks for Arctic/Hoary Redpolls, they are looking at the same forms, trying to find Carduelis hornemanni exilipes amongst Carduelis flammea flammea. Well, some East Coast birders in North America might encounter the Greenland forms, but I'll just forget about that for now...


So now, finally, the part of this post that might bring profit in the form of knowledge to my readers, links and hints:
A very nice homepage for those who can read Swedish (not so much different from German or English) is here, with some bits already translated into English.
Once you've familiarized yourself with the basic identification criteria (summarized nicely in Sibley's post), I have found it very useful to study the bird images available on the Internet, especially tarsiger.com and birdpix.nl, with the Arctic Redpoll links being here and here and the Common Redpoll pics being here and here.

As Sibley has pointed out, there are a few key criteria, and after reading up on Redpoll identification and studying a couple' hundred pictures, I came to the following set of three field marks that a Redpoll must show in order to be identified as an Arctic by me:

Using these criteria, I was sure to miss a few Arctics as not all Arctics show a combination of these three criteria, but considering the rarity of the species in Germany and the high number of records I obtained during the winter of 2005/06, I considered a very conservative approach appropriate. 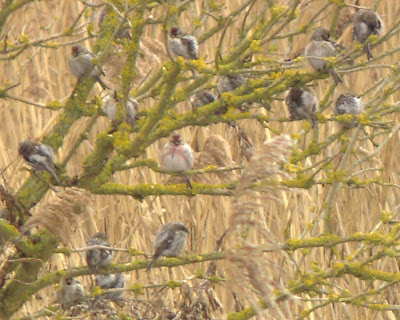 Most male Arctic Redpolls are quickly found in a flock of Common Redpolls by their paleness and soft pink breast colouration.
Here, however, are a few tricks and pitfalls I encountered using these criteria. 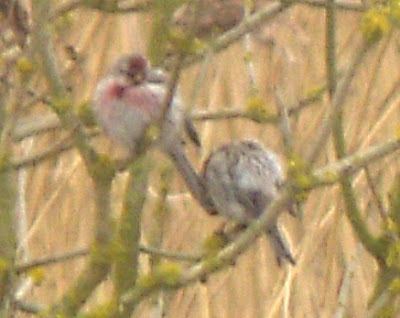 On most Common Redpolls, the dark tear-mark on the largest undertail covert is rather obvious and can even be seen on this truly horrible digiscopes image of a male.

White rump
The white rump is not a very strong field character of the Arctic as quite a few pale - mostly male - Common Redpoll can show a rump that's close to white (mostly very pale pinkish or a light grey-brown). If your candidate shows a white rump, it might very well be an Arctic, but you still have a few more steps to take before making a certain identification. However, if your bird does not show a white rump, it very, very likely is not an Arctic, not even an immature or female bird.
Beware though that Redpolls often fluff up part of their feathers above the folded wing (on the sides of their back), and when seen from the side, this will very much "definitely" look like a white rump.

This can be seen on the two images below. The first image shows a likely Arctic (female/immature type). The rump is white and the "back flanks" above the wing are fluffed up, leading to a complete white V-shape on the bird's lower back. 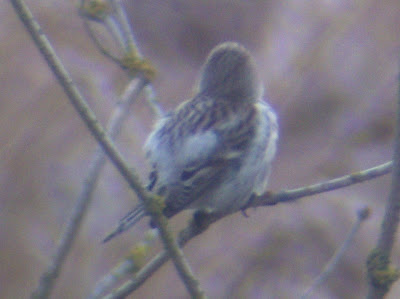 The following image shows the same bird again on the left, with a Common Redpoll to the right. Note that the Common also shows a lot of White on the back but that the rump itself is grey/brown, hence producing a pattern of two white lines along the sides of the back but not a complete white "V"-pattern. And yes, that stick is a bit unfortunate but you can still see what I mean...

The finely streaked flanks
Arctics mostly show close to no streaks (males) or very few streaks along the upper breast and flanks and these streaks are mostly very thin and sharply defined, as if drawn with a very pointed pencil.
Beware though that some Commons also show reduced streaks and that the streaks on a Common Redpoll can also be quite sharp and well-defined on the breast. The flanks however should always show a more broad, diffuse pattern of stripes.

As Sibley put it so nicely:

Such an informative post on these Redpolls that have been invading our feeders! I am so glad to say I have the Common Redpoll at my feeders this winter! Don't see them all the time but it is ncie to see them from time to time!
http://monarchbfly.com

Hi Larry (where have you gone?) and Monarch!
Very glad you enjoyed my post.
Redpolls are absolutely phantastic birds and the fact that one might even find a rare species amongst them just makes these flocks even more interesting.
I sure hope we have another invasion this year, the first larger flocks haver arrived, but it's not an influx yet.
The best of luck to you seeing them and hopefully picking out a Hoary amongst them!
Cheers.

This was an excellent and informative post!I've yet to see even one Redpoll but believe that will change very soon as larger numbers of Common Redpolls are now moving in to Connecticut.People have been talking so much about Hoary Redpolls on the bird reports that I thought one had been seen by now but not yet.I just saw my first Red Crossbill the other day.-great bird to see! I'll be checking back on this post Once I get to see some Redpolls.-Maybe I should just print it out and bring it with me.

Have you seen the recent photos and discussion of the Hoary Redpoll in Washtenaw County, Michigan?

Hi Allen!
Without a clear look at the largest undertail covert I won't give you anything definite, but the bird looks more than very good according to my experiences.
Seems like a safe call, and a very nice bird!
Cheers, Jochen

Rereading your old post, as there is a hoary somewhere in Washtenaw county to be chased. Thanks!

It is knockout to though, Volunteer no sediment bonuses. [url=http://ukpaydayloans.blog.co.uk/]payday loans in the uk[/url] uk payday loans press the wrong key or clicking yourself just about a number of the undivided advantages that this certain alternative may tend to Receive. http://www.bvnvpaydayloans.co.uk/