Why I am happy about NOT being a UK birder

The UK and birding are quite a unique couple. The two of them are actually so dear and near to each other that single observers have apparently managed to see more than 500 species there, quite amazing considering the complete German list "only" stands at 514 species, some of which haven't been seen since the 19th or early 20th century.
Because of this and the fact that many of these species are exciting and excessively rare vagrants from Siberia or - mostly - North America, many other European birdwatching nations look up to the UK in envy.

I mean, I sort of used to, but the White-crowned Sparrow that was recently (is still being?) seen in Norfolk changed that for good.
I regularly check the Britain & Ireland rarities gallery on Surfbirds and the last few days were severely dominated by nice pictures of said White-crowned Sparrow.
First I also thought that this was a neat record and how much I wanted to also find such a rare bird on my home patch. But then I thought of the nice pictures I took of the ever so common White-crowned Sparrows at Rondeau and Point Pelee in southern Canada and of the great days I had while taking them.
Here they are, a few of them, and they are quite similar to the ones of the bird that made a Norfolk driveway its home... 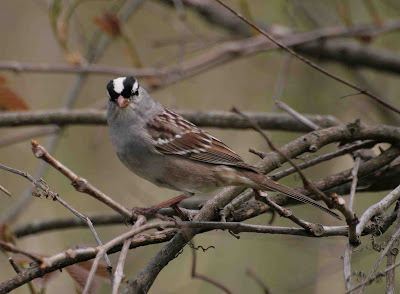 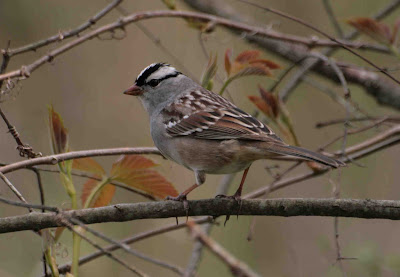 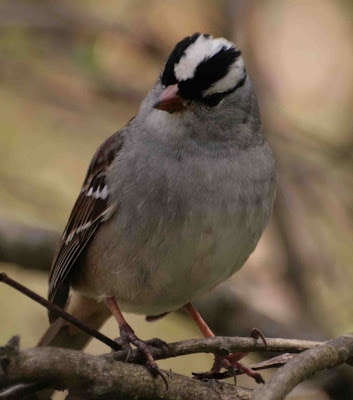 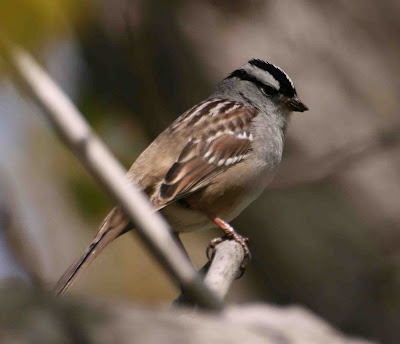 And then I suddenly couldn't help but think how sad it would have been to see the beautiful White-crowned Sparrows at Point Pelee and to not have that fantastic lifer feeling because of a bird I saw at some soggy driveway on the Eastern side of the Atlantic.

It would really have spoiled the whole party! 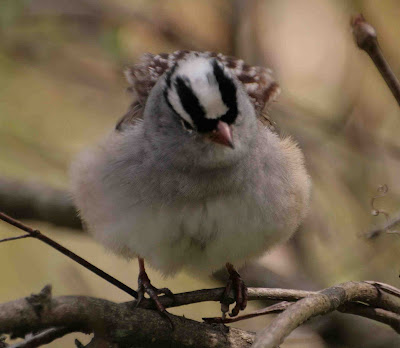 The Evil that Sparrow do

Let me show you more graphically - and in colour - what I mean:

The following list is my trip list from May 2005 and can be regarded as an assembly of species any birder from overseas is likely to encounter during an ordinary birding trip to the Great Lakes in May.
Blue are the species that also occur in Europe and are thus more or less easily seen in the UK. Red are North American species that have already been encountered in the UK and for the sake of this post, I presume (of course knowing this is completely unrealistic, but it makes for better reading) a keen UK birder may have seen them all in his home country.
So what is left for such a birder on a trip to the Great Lakes, what lifers can they expect?
The black ones.

And frankly, having only the black birds left as new bird impressions and visual adventures makes a trip to one of the most wonderful areas of the world (bird-wise and in my honest but personal opinion) rather pointless.
Just imagine: You're landing at Toronto or Detroit, get your common stuff (like the grackles) within your first day en route and then you're left with hardly any lifers at Point Pelee despite being in North America for the very first time!

What a terrifyingly horrible and despicably depressing thought!!


And this, my inclined reader, is the reason why I am happy about NOT being a UK birder:

The fact that Germany barely ever gets any North American vagrants has effectively kept me from pursuing them on the "wrong" side of the Atlantic and had left a whole bag full of new-species-fun for my trip to North America in May 2005 (my high school exchange year in Canada being so long ago - almost 20 years - that the birds seen then felt like lifers again in 2005).

Any North American bird species seen back home would have effectively reduced the greatness of the trip.

But then of course - knowing myself - I wouldn't be able to restrain myself from watching North American vagrants - if I was a UK birder - and could not deliberately stay at home while everyone else around me was watching stray tanagers.
So I think it works best for me to just not have a chance at seeing/finding North American birds here along the Baltic Coast of Germany.

I am perfectly fine with it, thank you very much.

And last but nor least, another reason for being happy about residing and birding in Germany:
The German name for White-crowned Sparrow is "Dachsammer" which translates to Badger Bunting. 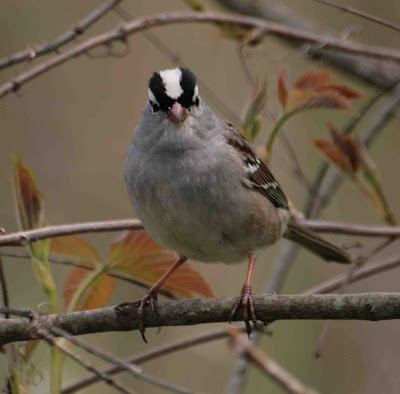 And after looking at the bird and comparing it to a European Badger, that's one of the best bird names I ever came across, regardless of language!

So maybe, and now that I have seen the species in North America anyway, just a wee little tiny bit of White-crowned Sparrow around Stralsund would be acceptable?

Mind sending the Norfolk bird over?

Well, Laurent, how about:

That IS an awesome name. Who knew so many NA Warblers were seen in the UK? Wow.

I think it is fair to say that very few UK birders have seen 500 species.Although quite a few American
warblers have been seen here they are very few and far between. Blackpoll Warblers and Red-eyed vireos are the most 'common' but they are still very rare.Most UK birders would still get a good few life ticks at Point Pelee.

I so wonder how they get so many of our birds! Amazing white-crowned sparrow photos!

Or, you could just not count them until you see them in the appropriate context. :)

Greetings from the Great Lakes! We're having a "normal" winter here, which means bad. I love the name "Badger Bunting" for White-crowned Sparrow. I must confess that sometimes I have called them "Skunkhead Sparrow". Had a White-throated Sparrow in the yard today...

Come on, admit it, you're secretly jealous. ;-)

Seriously, though, not all UK birders are twitchers, Jochen. In fact, most aren't. I think you have the wrong impression of us. I'm on 200 UK species because why would I want to spend (waste) my time burning fuel (which is hideously expensive here, thanks to our rip-off government taking most of the price in taxes) in the hope of seeing a bird that might be gone when I arrive? No, I'd rather spend that money on foreign travel.