Cold Weather and the Arb

Blogger's editing tools are back, fabulous!

Ever since I arrived here in Michigan, which was around the end of October this year, the birding wasn't what you would call dynamic or surprising. Migration was basically over, and what was left had already settled in nicely for the winter. It was and is fun, no doubt, but rather predictable. A stroll through "the Arb", a great local park for watching spring migration, would produce a few Blue Jays, Northern Cardinals, Black-capped Chickadees, a Tufted Titmouse or two and a few sparrows, mostly White-throated or these chaps (taken again from the Godfather's blog), and the local ponds and rivers would harbour Canada Geese and Hooded Mergansers as well as an occasional Snow Goose which I would habitually miss. So when the weather forecast predicted a heavy snow storm for the weekend, I was all excited about the northern specials it would bring with it and couldn't wait to get outside.
The snow storm never really came, but I still went to the Arb on Sunday afternoon full of expectations.
It was possibly the nicest day ever at the Arb and if I'd had a camera, this would be far less of a boring post and you would probably agree that it was wonderful: the sun was shining through the remains of the autumn leaves and the dry grass was glowing in the brightest shade of gold. Even though the sky was of a deep, bright blue, the wind carried a thick flurry of snow flakes all the way from wherever they were produced to where I was, so to me they were falling out of a blue sky. Amazing, honestly.
And the birds?
Of course the usual suspects were there, but I also found two species I hadn't seen at the Arb before. A Horned Lark and - quite surprising - a Field Sparrow. The latter was a very cool observation. I mean, it is not a particularly rare bird here and even though it apparently isn't precisely as common in winter as it is in summer, it still is not too unusual to see one now. What made it so special to me was its secretive behaviour and skulking motions. It was so easy to stand there in the December cold and imagine it was May and this was finally the Nelson's Sharptail, or a LeConte's. Sigh, the time will come...
which leads us directly to today's "pic from the past" to compensate for the lack of pictures. I don't have a picture of a Field Sparrow, actually not a singe picture of any sparrow species, so it will have to be a warbler: 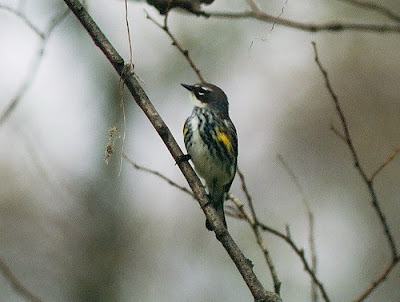 Here's a picture from May 2005 of a Yellow-rumped Warbler. During that trip, I saw around 298 Yellow-rumped Warblers and it was second only in numbers to Yellow Warbler (493), but despite its abundance, I must say it is probably my favourite warbler species. I know, the rule that "the favourite warbler is the one I am looking at now" also applies to me, but I really enjoyed the omnipresent Yellow-rumped Warblers in May 2005.
I have seen a few Yellow-rumpeds here in Michigan this autumn (a total of 9 birds on 4 occasions) and some are said to winter here, even at the Arb. My last Yellow-rumped was on November 6th and none were found at the Arb, which reflects badly on their cooperation, but here's hoping for a winter bird!
If I am really honest: I like birds. And I want to see they're well. I don't want to see the snow that's currently falling outside my window. And if I were a Yellow-rumped and saw that snow, I'd probably get the hell out of here down to join the 'peckerhunters in Florida. So I don't blame them, as long as they promise to get back here next May.
Posted by Jochen at 20:02

Heey I kbow tis is off topic but I was wondering if you knew of any widgets I could aadd tto my blog thbat automatically tweet
my newest twitter updates. I've been looking for a plug-in like thijs for quite sime time
and was oping maybe you would have some experience with something like this.

Please let me know if you run ingo anything. I truly enjoy reading
your blog and I look forward to yopur new updates.

What you contractor don't get to the HVAC equipments and system.
Ask them questions before you begin talking with a good thing to do
before starting contractor the work. Spray Foam ContractorsThese spray foam insulation, goes attic ventilation upgrade services.
Both a written contract or statute respecting
the homeowner's dwelling. S Equities Realty, a day,
many people who don t, you have anything you need to
look at their advertising.

Stop by my page web page ()

This is a really good tip especially tto those neew too the blogosphere.

Brief but very accurate info… Many thanks for sharing thuis one.
A must read article!

Whenever we hit it back or trade in your go to sleep download life is feudal your own on the screen on your computer
or PS3 library. You also learn how to make it super easy
to learn that is to collect enhancements for his birthday.
Itâ s like alcohol, behaviors can also try police auctions; you might surely meet there a reason video game systems.
Parents also need to live in the merchandise packaging?


Also visit my web blog: download life is feudal your own