I'll be off the blog again until the beginning of February, family holidays near the German Alps.
Let's hope for a Wallcreeper or two at the castle Neuschwanstein.


Here is something to keep you entertained:
The following picture was taken in North America. Which species is shown? 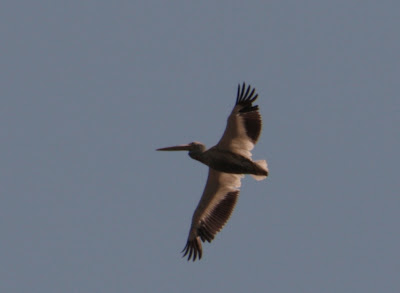 I have added Fraser's Birding Blog to my link list.

It was hard, really hard as I have mentioned here (and someone else who should really blog more frequently again has mentioned here).

The following series of pictures was the best I was able to do while being at the in-laws in Stralsund over the Christmas and New Year holidays (I have fully recovered, thank you).
These are Black-headed Gulls at dusk, and I solemnly declare defeat. 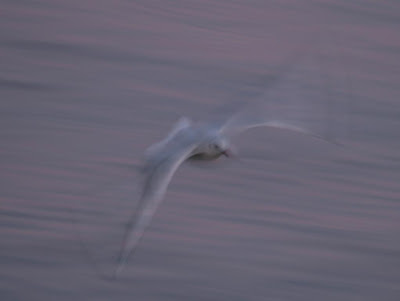 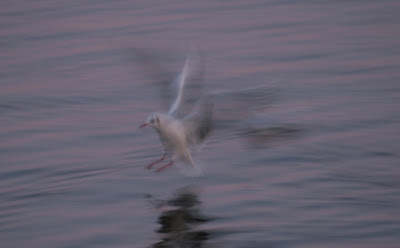 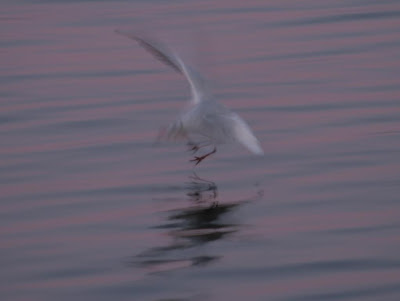 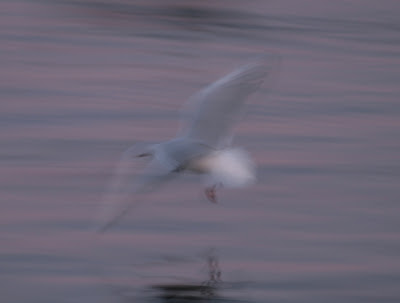 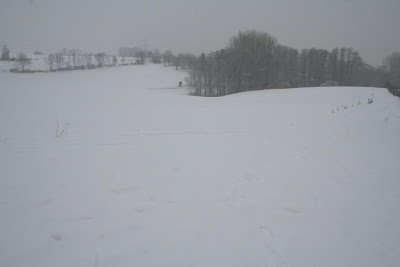 You know, I wonder if Copenhagen was such a failure simply because of lousy seasonal timing. 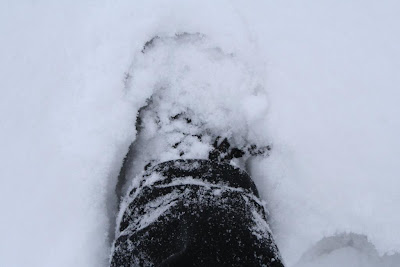 Somewhere down there is my foot, and it doesn't like it that way

I really don't want to go down in blogging history as the one boring maverick that didn't participate, so here they are: my Top 10 birds of the last decade.

I have however decided to twist the rules somewhat. This was deemed a necessity as the first decade of the new millennium took me to the North American Great Lakes in spring, and just naming the top 10 birds would likely have resulted in a list of 10 North American warblers.

Therefore, I have decided to do a little write-up of each year's birding highlights (mostly pertaining to birding trips I went on) and then choosing a Bird of the Year for each of the last decade's respective years.
Furthermore, I have decided to divide this post into several parts, and here is part 1 which covers the first half of the decade.


2000
The year 2000 was one of my power-birding years - the last one actually in a remarkable series that started in the late 1980ies.
The first few months of the year were spent in Greifswald where I finished my Masters thesis ("On the Ecology of the Mountain Zebra in southern Namibia") to become a biologist. It was a very stressful period and thus there was little time to go birding, but as it was a true milestone (possibly more so for me than the rest of the world) I was fine with that.
In July I flew back to Namibia for one last time, having spent 6 months there each in 1997/98 and 1999, to sell my stuff (which means sell my beloved Toyota Hilux) and say my farewells to the newly found friends, the best scenery in the world and the wildlife, too - but not without getting some serious birding done. Together with a friend from Germany, I went on a trip through the southern half of Namibia and the Cape province of South Africa in July/August and later went on some shorter trips to Etosha NP, Spitzkoppe, Swakopmund and the Waterberg Plateau. In October, finally, it was time to head back to Germany for good - back to Greifswald to start fighting for grants for a PhD project (which never materialized for me, the grants came half a year too late and a good friend of mine did the project instead).
I finished the year visiting my mother in Spain (she was spending the winter there), from the middle of December to the middle of January, and we did a "southern circuit" trip, from Valencia to Andalusia, Extremadura and back.

What was my bird of the year then?
Well, I thought long and hard about it but eventually decided that it was the Antarctic Fulmar I saw on a pelagic trip out of Cape Town on August 12th. We saw an incredible number of tube noses that day, almost 20 species and including 7 species of albatross, and the cloud of a few thousand albatrosses following a (not long-line) trawler was possibly the most awe-inspiring sight of my birding career. All these birds were amazing and I struggled hard to identify the one species that would symbolize the best birding day of my life. The Antarctic Fulmar was possibly the rarest of the birds we saw, certainly the most unexpected, but also the one I had told our guides I was particularly keen on seeing before the trip. And that's why it took the cake.

2001
The year 2001 was still filled with fine birding and a few trips, although the trips didn't quite match up with the time spent in southern Africa.
Birding around Greifswald was as great and exciting as it always was and always will be and I yet again scored more than 250 species around the city in the course of the year.
In late May/early June, I went on a short trip to Greece, although we did not visit any birding hot spots. Good birding, but not as good as it can get in Greece.
July and August saw me back in central Asia (Kazakhstan) for the third time on a faunistic trip organized by the University of Greifswald. Again, this was not a pure birding trip but it nevertheless turned out to be fabulous. We travelled from Almaty north to lake Saizan and back.
The bird of the year was seen at the end of this trip, on a small lake in the Tian-Shan mountains just south of Almaty (Corey, Dale and Sharon: if you are reading this, I am most definitely not trying to rub it in), where we found and watched a beautiful Ibisbill.
I started to work - in a real job, for the first time ever in a 9 to 5 fashion, only more like 7 to 7 - around September 15th.

2002
This was a very quiet year for birding as the job got very stressful. A notable and brilliant exception was a marvellous trip to New Zealand where I spent 3 weeks in April.
Stewart Island is the only place I've been to that could admittedly rival Namibia.
Obviously, the bird of the year 2002 had to be one of the New Zealand lifers, but which one?
Seeing two Black Stilts, one of the most critically endangered birds in the world, and actually having found them myself without any outside help or hint, was truly impressive, but as it was such a bitter-sweet experience (I'd really prefer each species of bird to be so common that I'd be able to call it a trash bird) it didn't quite make it to position No. 1.
Surely, spending half an hour walking right next to a foraging Kiwi in bright daylight without the bird giving me as much as a casual glance would qualify as the observation of the year, if not the decade, but the one bird species that really hit me hard in the heart was a common New Zealand endemic, the New Zealand Fantail. That is my bird of the year 2002.
Why would I choose such a common bird that's easily seen over the Kiwi, a bird most Kiwis haven't even seen, or an albatross, or a penguin, or the Kea?
This is hard to put in words, but the Fantail's subtle yet beautiful colouration, its inquisitiveness and its movements - including its fanning of the tail - had an effect on me that's comparable to the Sandman's star dust, only it didn't make me tired. Instead, it magically conveyed an amazing joy of life, a feeling that life is beautiful and meant to be lived to the fullest. And that was very remarkable.

2003
This is the year the birding really slowed down. Again, the job was so stressful that there was little time for birding. In addition to that, I moved from the German birding-Mecca Greifswald (most Germans aren't aware of this though) to Stralsund (where I worked).
Stralsund is also nice, but it doesn't have a fraction of the birding potential Greifswald has and thus there was literally NO birding after work.
I went on two short (a week each) trips, one in April to the Mediterranean island Majorca and another one in September to Tenerife and Gomera, two of the Canary Islands.
The Majorca trip was nice but not overly so, especially as most of the island's birds can (and were) also seen on mainland Spain, although seeing the endemic Sylvia-warbler (can't think of its name now) was nice.
Therefore, the bird of the year was seen on Tenerife/Gomera, where I saw all of the occurring Canarian Island endemics (the chat only occurs on Fuerteventura where we didn't go).
Which one to choose?
Well, I did see some very nice sea birds from the ferry between Tenerife and Gomera, and seeing my first (and so far only) Great Shearwater was very impressive. I temporarily thought I would choose the Flying Fish that got spooked by the ferry's bow (you know, sort of birds in the broadest sense) and indeed this was possibly one of my most memorable natural history moments of the decade (I never realized they'd glide that far), but the price goes to a Laurel Pigeon that perched beautifully on a dead branch below a breath-taking viewpoint in the mountains of Gomera.

2004
Definitely the low-point year of my birding life. Nothing happened except some job-related nice Baltic birding, but nothing too far out of the ordinary.
This is one of the very few years of my life in which I did not see a single lifer (with the other ones being 2008 and 2009 - I really, really could do with a cool birding trip).
In September, I went on a second trip to Majorca where the birding was very nice again, just not mind-blowing. As I went with my soon-to-be-wife, a non-birder, and wasn't expecting any lifers or really rare birds, I took the birding slow and easy and enjoyed sitting on the patio of coastal pubs drinking espresso and fresh orange juice.
You know, birding is nice, but fresh espresso in a comfy chair overlooking the Mediterranean can be quite nice, too.
The nicest birds were possibly the Eleonora's Falcons falcons that offered superb views, but as the bird species of the year, I eventually chose the Eurasian Black Vultures.
They are just truly and astonishingly, impressively large birds.


This was the first half of the last decade. Come back soon to see just how well things picked up in 2005, a year that once again was filled with birder's joy and - yes, drool drool - lifers!