Praise the Buzzard, hail to the Crows (and some credit to the sparrow, too)

So this is how you do it:

1. Spot a rare and difficult to identify bird.

3. Put the pictures on your blog.

5. Lean back with a drink and relax.

6. Watch the number of visitors to your blog soar (especially cool when the bird you recorded was a raptor). 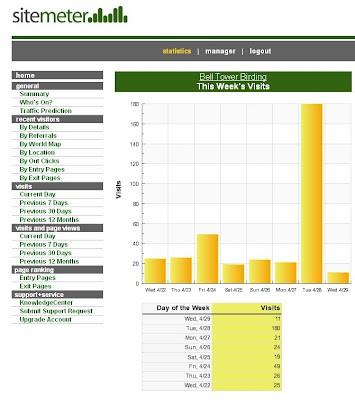 A sweet 180 visitors - This was by far and a wide margin the highest number of visitors per day ever on Belltowerbirding. Only once before did I manage a three-digit number of (I think) 132 when I hosted I and the Bird.

So praise the Buzzard for showing itself, hail to the Crows for mobbing it and drawing my attention to the hawk and cheers to all those visitors who were either curious or skeptical and thought the news worthy of being checked out.

I know you [the ones who came here for the Buzzard and the Buzzard only] probably won't as there will not be Buzzards here every day, but it was still nice having you around and I appreciated your presence here.

There are still good birds to be seen and themes to be blogged about.
It is spring, the birds' migrations are all over us and I like that.

By the way, the smaller Friday peak was my Savannah Sparrow post at which I hinted in an Email to the SE Michigan birding list. You see, it always works, it's just that raptors are apparently almost four times as popular with birders as New World sparrows are.

[Dear regular readers: last weekend was yet again outstanding. Well, I didn't log a fine male Prothonotary Warbler but this would surely be asking a whole lot too much for a weekend in central Europe. However, I spotted and photographed what I am more than confident is a 2nd cy Long-legged Buzzard near my home"town" of Leimen in Germany, a very rare straggler to Germany with only a few observations each year - if that many at all. Sadly, I currently don't have the time to blog about it the way the bird deserves to be blogged about, and this post's aim is solely to offer others the possibility to check out the pictures and comment if they want. The rest of the post will therefore be written in German - first time ever on Belltower Birding - but of course anyone in the English-speaking world with an opinion on the bird is very much invited to comment. Cheers, more blogging soon to come your way - on other blogs for sure, but likely also on mine.] 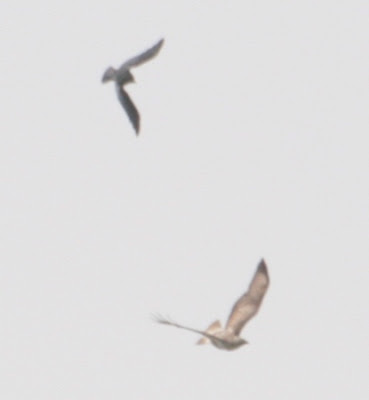 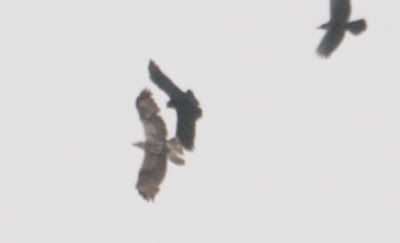 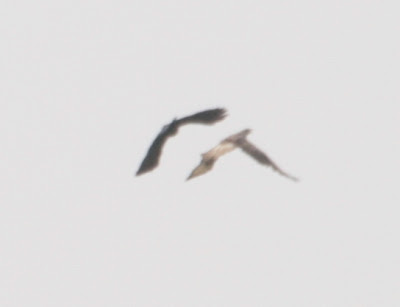 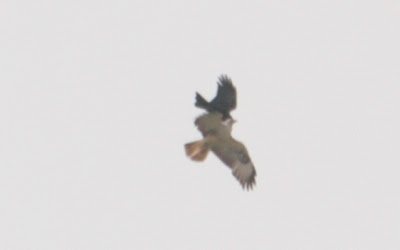 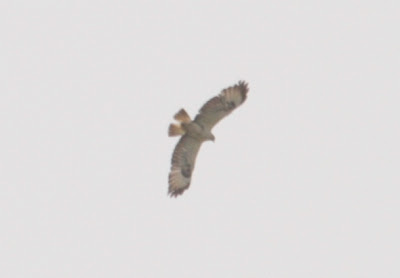 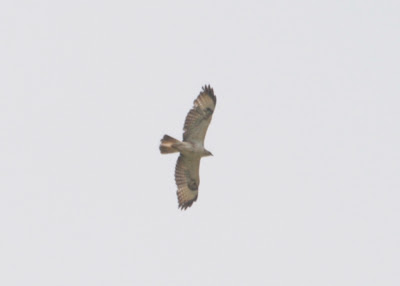 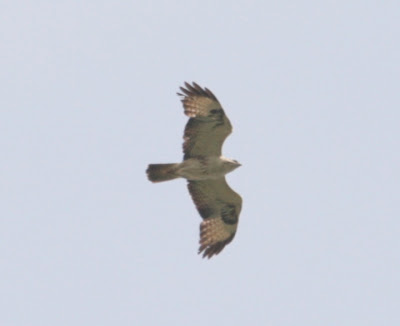 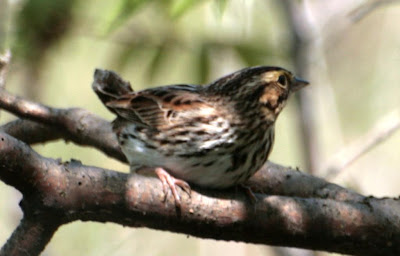 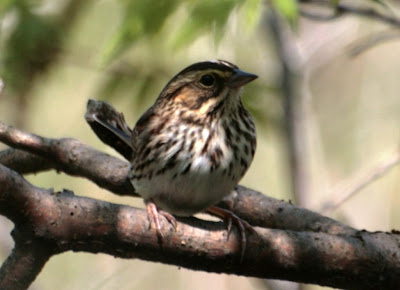 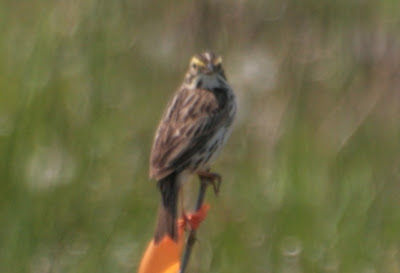 As before, comments are highly appreciated!
Posted by Jochen at 10:44 1 comment:

There may be more to it than just Context

Context may play a good part in concealing some bird species from the dangers abounding around them. 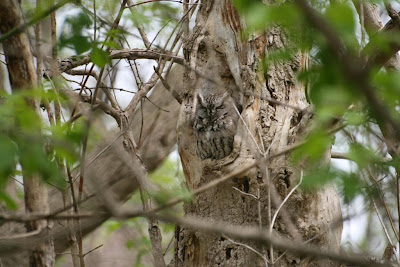 It allows them to sleep soundly... 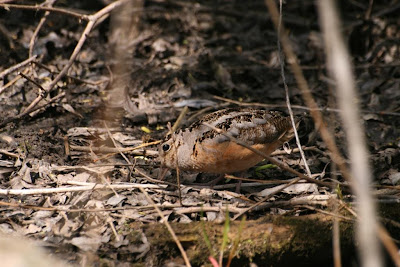 ... or recharge undisturbed for the migration flights ahead ... 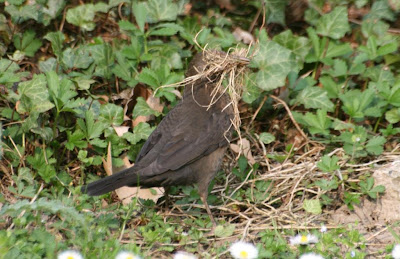 ... but if your plumage is lacking even the basic prerequisites, neither context nor desperate measures will get you beyond a nice try.
Posted by Jochen at 12:19 1 comment:

Birders from the British Isles: I need your help!

Am I lucky or not?
That is a good question, and I hope a few fellow birders from the UK and Ireland (or elsewhere) can help me answer it.
For the last few couple' years, I was more than interested in the different forms of the White (or whatever) Wagtail, Motacilla alba etc., that may or may not occur here in Germany.
So whenever and wherever I chanced upon one such bird, I studied it at length and with passion and affection.
Now, last week's Thursday was one such event, and to my great surprise and astonishment, the wagtail I was looking at was quite a bit darker than the usual albas and even had a few black areas on the "shoulders".
So it seems I had found a Pied Wagtail, Motacilla (alba or not) yarrellii from the British Isles, a surprisingly rare bird for the south-west of Germany with probably not even one observation each year (can you believe it? I can't, but that's another story).
Well, being a form so rarely reported in Germany away from the immediate North Sea coast, there are always a lot of discussions, issues and raised eyebrows connected to reports of it and if you have not seen a completely black-backed and classic male (which the bird I am referring to wasn't), then people will always tell you that ordinary albas may sometimes be quite dark as well and show black areas and that the yarrellii you have observed was likely just an ordinary alba or at the most a hybrid alba x yarrellii anyway.
Frankly, amongst the definite breeding birds in Germany (birds seen after the middle of May when migration really is over) I have only once seen a bird with a few black marks that might or might not have really been a hybrid. But apart from that, anything blackish or darkish where an alba is light grey is something I would strongly associate with yarrellii.
But as I have never really been to the British Isles, I may (or may not) have no idea what I am thinking or talking about. Thankfully though, there are the blessings of the bloggosphere and the Internet and if there are birding issues I am lacking expertise in (oh no!!!), I can just ask ...

... YOU!
So, please, if you have anything to say about the bird - whatsoever - let's hear it in the comments section.
By the way and before you scroll down to the pics, there is a second "mystery" bird following the wagtail, a Yellowhammer, so if the wagtail doesn't float your boat the other bird might and you'd possibly care to take a quick look.
Cheers, thanks in advance for your comments and happy birding trails! 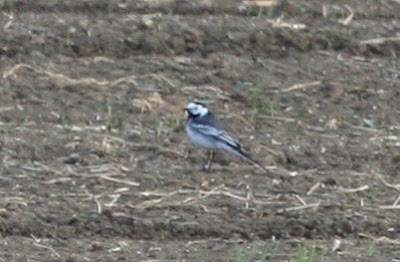 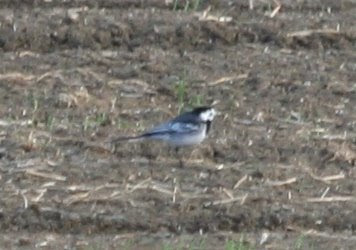 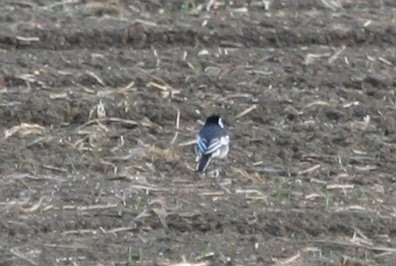 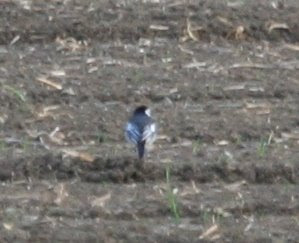 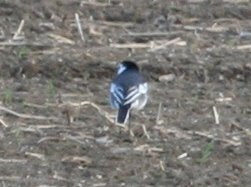 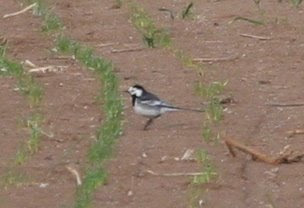 Okay, now on to the Yellowhammer.
The following pictures show what I would call either a female Yellowhammer or - as I have no clue how to age Yellowhammers and am simply too lazy to look it up now - an immature 2nd CY bird.
At first glance, this looks like a typical bird but I have found a few features odd:
- The lesser coverts have white tips. This can occur sometimes and I have seen it once in a while on Yellowhammers, but it is quite rare.
- The greater coverts however have a white margin as well, and this is something I don't recall having ever seen on a Yellowhammer. Interestingly, the bird has moulted one of its coverts (the innermost) and the fresh one is of the neat rufous you'd expect to see in a Yellowhammer. But can the older, whitish ones be so heavily bleached?
- The colouration of the tertials is puzzling to me, too. The margin is supposed to be rufous and rather broad on the outer web with the extension towards the feather's centre so typical of the Emberiza-buntings. The tertials of the mystery bird however show a rather narrow whitish margin that is lacking the Emberiza-extension. Of course some of the margin is abraded, this is obvious, but still it is a more than strange pattern - in my honest and humble opinion.
- the central part of the back is almost white and reminiscent of an Arctic/Hoary Redpoll. This is also something I haven't seen before on a Yellowhammer.
- the neck is quite grey which is a pattern found frequently on Yellowhammers, but I have never noticed it as being so obvious as on this bird.
So, the big question is:
Can this be an ordinary Yellowhammer and I have as yet simply an over-simplified image of the species' variation? (Ha! Remember that stereotype post?)
Can this be an abnormal Yellowhammer, a mutation of some sort?
Can this be a hybrid with another species of bunting and if so, with which?
As with the wagtail, any comments whatsoever are highly appreciated.
Of course, if there is someone out there who knows for sure this is not a Yellowhammer after all but a classic individual of a highly range-restricted super-rare and special East Asian bunting that's never been recorded West of Tibet before: step forward valiantly and speak out. Your case will surely be met with more than just massive interest.
Thanks, cheers and here - finally! - are the pictures: 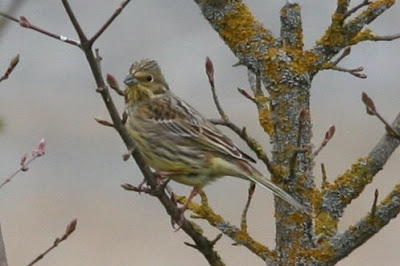 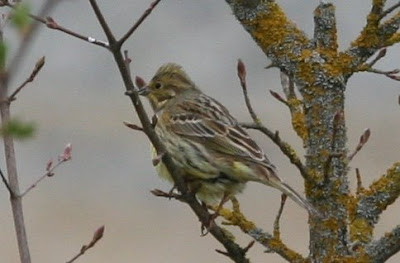