A day along the River

Oh, I know what you are thinking: what good can a day's birding be nowadays along a North American river if its name is not Bajou de View or Co... you know which one I mean, some Florida river anyway, but I disagree: I also had fun today along a river named Huron. As a matter of fact, this post is even interwoven with the previous one, by pure coincidence of course unless the birding gods are reading Bell Tower Birding which I still doubt.

With the weather suddenly turning nice and sunny this afternoon, I decided to forget about work and go birding instead. Now let me repeat this: I decided that I had been so incredibly creative and effective and had worked so tremendously much that I needed a few hours outside to get new inspiration and ideas on work projects and regain my focus on current issues. I therefore jumped onto Bus No. 3 which dropped me off close to the Huron River at Gallup Park. I then walked along the Huron, passed South Pond and finally crossed the Arb on my way back home. Here are some of the birding highlights:
Great Blue Heron
Mute Swan
Canada Goose
Common Merganser
Red-breasted Merganser
Hooded Merganser
Pied-billed Grebe
Mallard
Gadwall
Shoveler
Belted Kingfisher

Doesn't that list ring a bell? Of course: yesterday's post on what species to see on the Baltic Sea coast. Man, this could have easily been a day back home or not?
I have to admit that a few species would stand out within an average Baltic day list, like a Hooded Merganser (although there really has been one male wintering on the island of Rugia for the last couple of years and I saw it there nicely, no kidding), a Pied-billed Grebe or a Belted Kingfisher. And if I am to blog in total honesty: the day I get to see 4 Great Blue Herons at some Baltic wetland is the day I'll tell no one about it and quit drinking beer instantly, which is why I hope this will not happen any time soon.
Here are some pictures to show just what a decent Heron on the Baltic coast is supposed to look like: 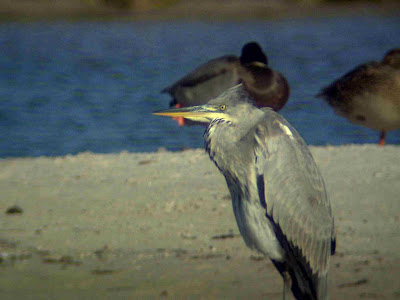 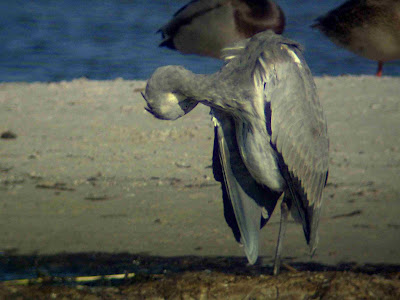 The Belted Kingfisher was quite a sight of course and a worthy distraction from the two male Eastern Bluebirds I was watching at close range. I normally don't go for showy unless it is a Cardinal in a bush with snow, but these Eastern Bluebirds are slowly starting to pick up speed on their climb up on my list of favourite North American birds.

It was already getting dark when I crossed the Arb and there were almost no birds around. I took this opportunity to carefully inspect some of those dog walkers. Most dogs are pretty big, I must say. I am now convinced I should focus my educational conversations about bird disturbance at the Arb on joggers.
Posted by Jochen at 23:56

It might look silly to comment on one's own blog, but I just found out that there was a Bald Eagle on the Huron while I was there. I have NO idea how I could have possibly missed it! But's a matter of fact: I sure did!
I am therefore so glad about Bob's new video release and sincerely hope things like this will never happen again...