The Birding Year 2006: January and February 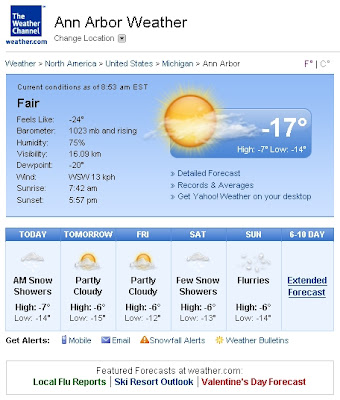 It is still a bit too cold to be walking the Arb for hours and I still have a shugar pile of work on my desk, so I'll stay indoors again. Gosh, not much birding done lately.
But as I had sitemeter installed lately, I am aware that quite a few people accidentally visit my site each day, so I knew it was my responsibility to put something new up today.
And so I decided for the first of my episodes on the birding adventures along the Baltic coast in 2006, the

2006 Birding Year Summary, part 1
January and February of 2006 on the Baltic were characterized by a grim cold spell (ha, wonder why that sounds so familiar) that caused most of the bays along the Baltic coast to freeze and also by a tremendous amount of work not allowing for much birding (yet again, I feel I have somehow seen that before).
I nevertheless managed some fine city birding. As you can see here, the old city centre of Stralsund is actually an artificial island, surrounded on one side by the Baltic Sea (a narrow strait called Strelasund separating the island of Rugia from the mainland) and on the other side by a chain of artificial ponds. These ponds are surprisingly good for birds during winter and migration but often freeze over completely by mid-winter.

One of the best birding adventures of each year when the ponds are frozen is taking a prolonged lunch break and walking down from the office to the harbour front of Stralsund . Even when ice dominates the landscape, there is always a small spot of open water where the ponds flow into the sea at the harbour front, and this area is irresistible for anyone interested in gulls and gulling.

A typical birding lunch break leads from my office to the ponds where usually a few gulls can be found resting on the ice. With the old city center as a background, this is often a very nice sight even if the species encountered are mostly the common ones, like Common Gull and Black-headed Gull.

This is the church St. Mary's, one of the largest (and most beautiful) in Northern Germany. 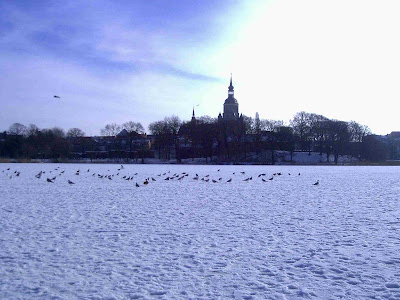 Quite often, people carry a supply of bread with them to assist - if necessity arises - any birdwatcher in getting close to the gulls. Very considerate people, I must say. On the left you can see the beautiful "White Bridges" that cross the ponds towards the centre ofStralsund. 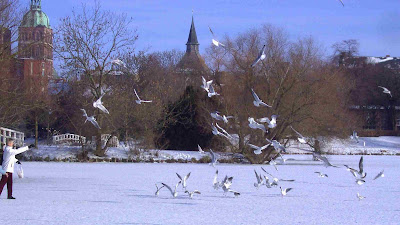 Here again, the frozen pond with a bunch of gulls in front of the "White Bridges". 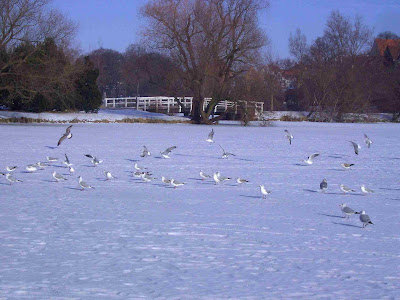 Watching the gulls from the bridge is often quite "different" as you're looking down upon them. Here's a nice adult winter Black-headed Gull in flight photographed from above. 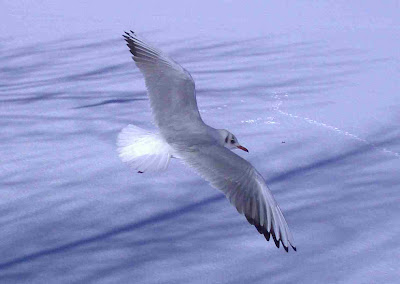 After having checked the pond gulls, it is time to head out for the main attraction, the harbour front.
This is usually the kind of sight one is greeted with upon arrival: 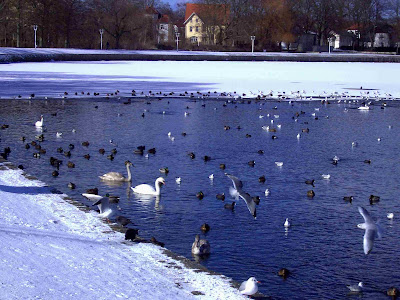 A view across the ice towards Rugia. 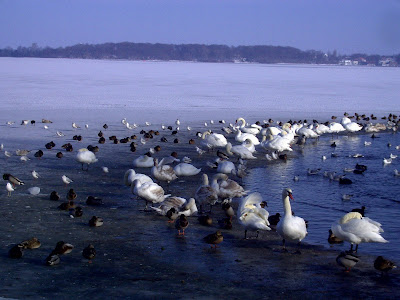 The view towards the North is especially impressive and sometimes it is even possible to see the island of Hiddensee (highly recommended). To the left on the image below is the mainland, to the right is Rugia and Hiddensee would be visible right in the centre, but not on this photo... 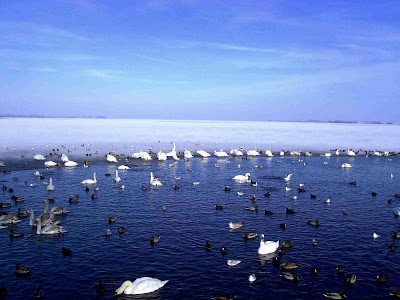 Well, certainly the species one gets to see there don't include national rarities every day but they are just nice to watch.
Just as an example, you get to marvel at Mute Swans without remorse, pretty nice, North America! 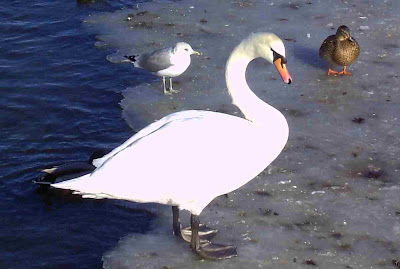 And then of course there's the Mallard, we all knew that one was coming... 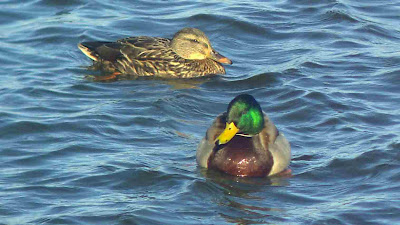 And there's usually a bunch of other species around, like Coots or this male Tufted Duck, crappy photo but nice eye: 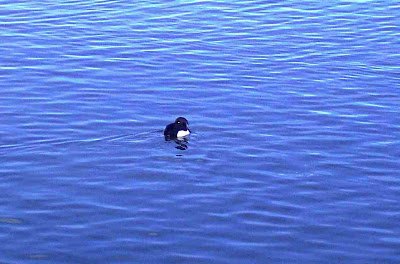 Talking about eyes, here's the Goldeneye: 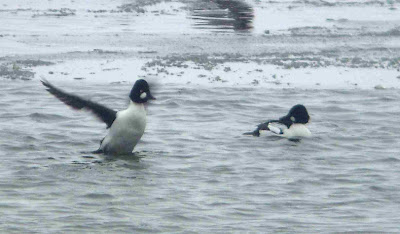 This nice male Common Merganser never stopped preening for about an hour, so this is all I got: 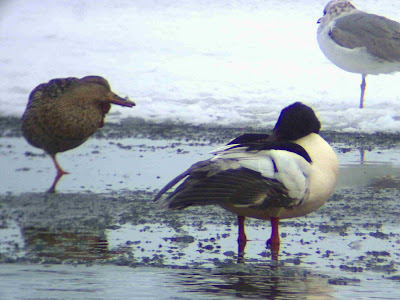 Looking at the Mallard besides it, could it be preening has the same infectious effect as yawning in humans?

And finally, the main attraction, the Gulls!

The majority are Black-headed Gulls, closely followed by Common Gull (the smaller guys seen below) and the big guys, Eurasian Herring Gulls. Also, there's usually a handful or so of the real big gulls, the Greater black-backed Gull. 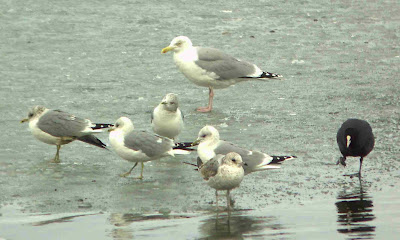 Here, below, is a shot of an immature Black-headed with a Common. Yes, it is true, when it comes to who's gonna get the next piece of crumbled bread, there's no sympathy between those two species, plain to see on this image. In Germany we have a saying that - roughly - goes: if two fight, the third party wins, in this case the Mallard seen down on the ice.
A thorough fight amongst the gulls is usually the only chance the Mallards get at obtaining some of the bread. 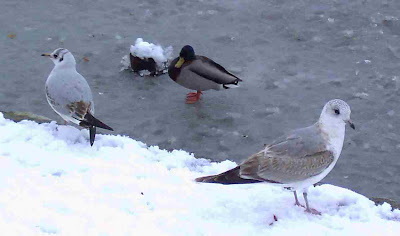 But it is not all animosity amongst the gulls as can be seen below. 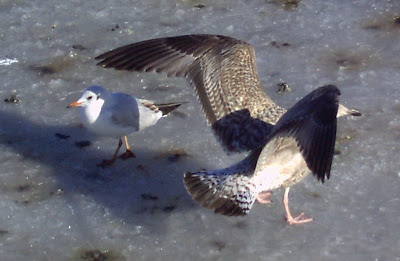 This protective side of Herring Gulls however is only rarely appreciated.

Even though all of them are common species and the balcony of Rancho Naturalista might host more diversity, it still is nice to spend your lunch hour with Coot, Jackdaw, Rook, Black-headed Gull, Eurasian Herring Gull and Mute Swan. 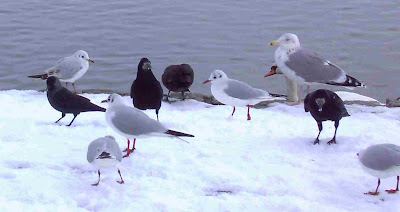 After having spent enough time with the gulls (usually limited by the battery of the digital camera), I used to take a short detour through town to get myself a decent German Bratwurst for lunch (oh, I had to write this) and have a look at the town hall of Stralsund, which is pleasing to the eye each time you get to see it. 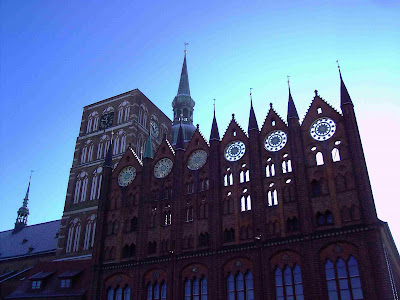 And then it was back to work...

A more unusual birding day in February was owed to Birds Korea, more precisely the Bird Race for the Birds Korea Saemangeum monitoring programme. Just follow the link to the story.

Fair is foul and foul is fair and work isn't always bad. At the end of February 2006, I got to take a look at parts of the Peene valley as a job assignment.
The valley of the Peene must rank as one of the best birding spots in Germany, if not in Europe. Its vast expanses of shallow water, reeds and swamps attract an immense number of waterbirds, including for example flocks of Gadwall that number in the several Thousands , plenty of Smew, Geese, breeding Cranes, lots and lots of White-tailed Eagles, Great White Egrets, passerines beyond imagination and ... well, you get the picture.
It is just plain great!
Of course when it is all frozen there's nothing, BUT when it's all frozen, you can walk on the ice and get to places that are normally completely inaccessible, so this trip at the End of February 2006 was still a real treat, and I did see a Great Grey Shrike (I think the North American form is very different and might eventually be found to merit species status, so I use the European term).
Here's a view onto the part of the swamp I had set out to explore: 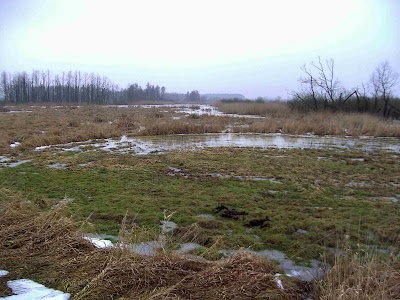 Most water channels were completely frozen ... 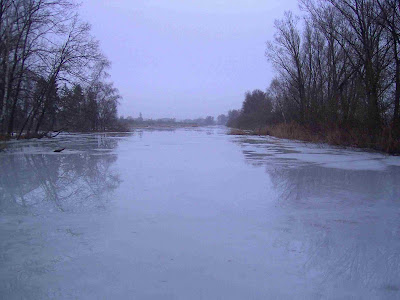 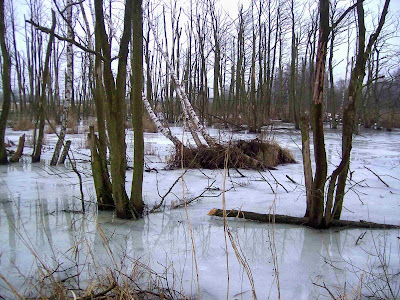 ... but a few of the smaller rivers joining the Peene still had some open water: 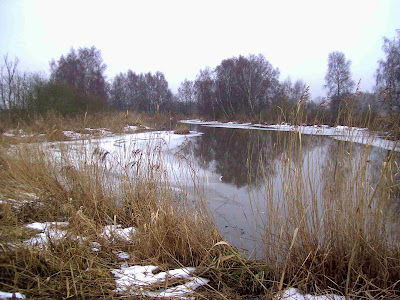 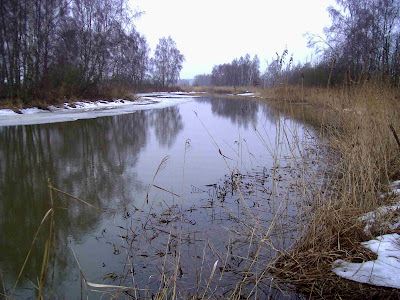 One of my objectives was to look for signs of Otter Lutra lutra, which are reasonably common in the North-East of Germany with the valley of the Peene being their stronghold.
So it wasn't a surprise at all that I easily found this ... 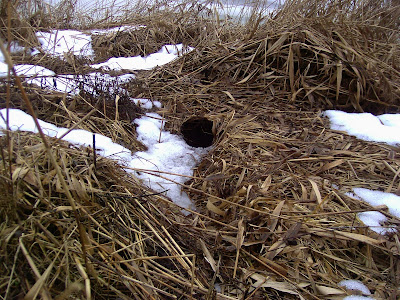 Here you can see the reason why you should refrain from telling the general public what exactly you are doing when out searching for Otter: 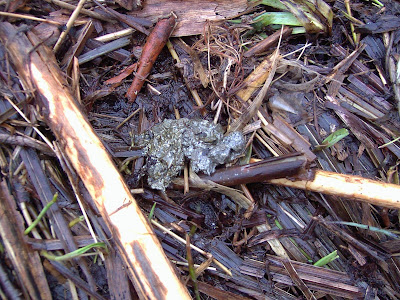 So this was birding in January and February 2006. I thoroughly enjoyed it, hope you did, too.
Posted by Jochen at 17:29

Jochen, I didn't realize you had a blog! Cool beans. I visit Ann Arbor monthly for an eye disease, so maybe one of these trips (when it's not go ungodly cold) you can show me around the Arb- I've never been there.
Enjoyed the photos & will put you on my sidebar so I can refind you :)

I did not realized there was so many common species between Europe and N america. Too easy for you!

Do you know a good book about european birds? I bought the one you have for American Birds (Sibley), very cool, and I m looking for something similar for europe. Bootstore did not have anything good last time

Hi Cindy, I hadn't realized you were WoodSong! Been to your blog a few times through Charlie's Bird Blog and enjoyed it very much, I remember this one flight shot of ... I think it was a White-breasted Nuthatch?
I'll put you under my links as well, and must say that "Dances with Moths" is quite a name to come up with!
Yes, I'd gladly show you around the Arb, just drop an email.

Bonjour Laurent,
the one and only guide, the global king of bird guides so to speak because it is really, really good but of course not perfect),is from
Mullarney / Svennson / Zetterstrom / Grant and published in North America by Princeton, you should find it by searching for these authors. I am sure there's a French version available as well, just search amazon!
Well, there are a lot of birds in common between these two regions but most are of different subspecies and I'd say if one goes into the details, quite a few should probably be regarded as separate species. For example the Osprey: no one can really tell North American birds and Eurasian birds apart in the field but yet they differ genetically as much as Bald Eagle and White-tailed Eagle, and no one would doubt these are separate species. Or the Winter Wren we recently dicussed on birders: might not be the same species afer all but possible up to 4 real "good" species.
So even if many species here seem European, keep a close eye on them because really they are not.