This is quite sensational, and even though I might just be too late for world-wide fame, I'm not in it for the glory anyway, just for the truth to be revealed!

The Ivory-billed Woodpecker is out there, I have had an encounter, and its range is more extensive than previously (even historically) realized.

It all happened last Friday, September 7th, at the most remote and inaccessible corner of the famous and extensive wilderness area called Ann Arbor's "Arb".
It is actually called Nichol's Arboretum, but we locals call it the "Arb", which is much more creative than "Chock" for Choctawhatchee.
This area is so remote that few will know where it is, so here goes: it extends over vast areas of Michigan's remote South-East, just west of Detroit Bird City.
To get an idea of just how hard it is to even get there, let alone find your way through the Mosquito infested forests without a native guide, read here or take a look at the picture below. 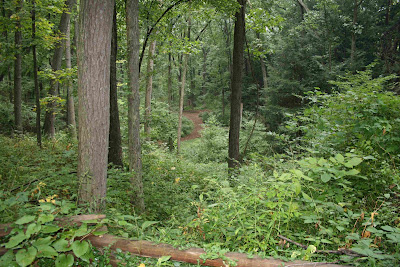 Bayou de Heathdaleview
Anyway, so there I was braving nature's deadliest and working my way through one impenetrable green curtain after the other when all of a sudden, I heard the distinct kent call of the Ivory-billed Woodpecker.
Many people will have you believe it can be mistaken for a Red-breasted Nuthatch.
Utter nonsense by skeptical pseudo-academic pretenders.
My goodness, just look up the call of the Red-breasted Nuthatch in your Sibley guide:

Do you see "kent kent kent"?

So there you have it, clear proof I wasn't hearing Red-breasted Nuthatches.

Furthermore, the calls differed slightly from the recordings obtained at the "Chock", they were more hoarse, like from an Ivory-billed Woodpecker with a sore throat. This too was a very important and intriguing piece to the puzzle of identifying the calls as belonging to an IBWO, as the Choc recordings differ from the ones obtained in Arkansas and these differ from Tanner's recordings. So all was well.
Of course I immediately lowered my camera and switched it off not to be distracted in case the bird made an appearance and I started to stare in the direction the calls were coming from.

Then, all of a sudden, I saw something big with a white trailing edge to the wing swoop up behind a dead tree and a split-second later, this Blue Jay landed on top of it, seen below. 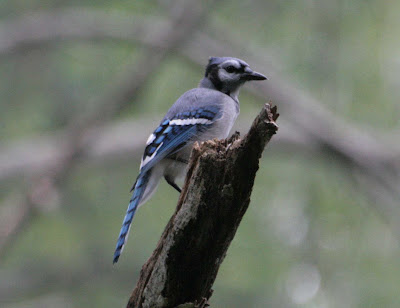 I presume the woodpecker had mobbed it off the trunk and was now hanging on to the other side just out of view (clear proof of it being an Ivory-bill) while pushing the Jay onto the top perch of the tree as a decoy for naive skeptics.
This has worked quite well in Arkansas and Florida as now the myth has spread that Blue Jays can produce calls identical to Ivory-billed Woodpeckers and this is used as a firm argument of some naive skeptics against the recordings, and the Ivory-billeds are left in peace.
So the appearance of a Blue Jay directly connected to hearing Ivory-billed calls is yet another clear and irrefutable argument for the existence of at least a few pairs of Ivory-billed Woodpeckers along the Huron river in South-East Michigan.


News you can trust, courtesy of yours truly.


Okay, "fun aside" as the saying goes in Germany, here are the facts:

Ever since I started to enjoy watching the Ivory-billed Sitcom about two years ago, I was intrigued by the argument that Blue Jays can utter calls very similar/identical to the kent calls described for the Ivory-billed Woodpecker.
I therefore payed a lot of attention to the calls of the Blue Jays I encountered during the last 10 months in the US and Canada to see if I could hear those calls, but it was not until last Friday that this eventually happened!
As I said, the calls were different from Tanner's recordings, more hoarse and drawn out, but if I was searching some river down South for Ivory-billed Woodpeckers, I would have been slightly excited.

But then again, I might just be a sucker for more hits, and writing about another sexy Redhead would have been quite flat and obvious...
Posted by Jochen at 23:07

Now that you mention it, I did see some intriguing A-holes whilst kayaking through the Arb last weekend. And there was this one large bird that kept hopping around to the other side of the tree. I didn't actually see it, but that's typical IBWO behavior. I dare you to prove it's not.

Chalk it up as an "interesting" sighting, I guess.

There you have it, and I told you: the Arb is full of surprises.

Regarding the whole woodpecker story, I keep being amazed by a simple mistake the searchers apparently are making, at least this is not published:

Try finding these strange double knocks in - say - Minnesota, scan 10,000 hours of audio from Upstate New York for kents etc.
So my own little search for kent calls in blue Jays was just playing around a bit, but it was fun.

LOL, I two have been enjoying watching all this Ivory Billed Woodpecker soaps and for sure is crazy! I did greatly enjoy reading your details on the kent calls!

Oh how lovely another Jackass with a blog.

I haven't been paying enough attention to that sitcom obviously, because I hadn't read that about Blue Jays. But now I'll have to look for it! In reality, would the calls be at the same strength or volume though? I mean I've heard BJs sounding like RS Hawks a lot but it's sort of like a weak imitation most of the time...

Hi Mon@rch!
Glad you enjoyed it, it is fun to participate at least a little bit.

Anon: Who's the other one?

Hi Rurality!
Great I got you interested in Blue Jay "kent" calls! Have fun searching for them as much as I had (always a good reason to specifically look for such an awesome yet highly underrated bird).
I can't tell you if an Ivory-billed Woodpecker's "kent" would sound different as I have never hear one :))), but I would expect there to be slight differences. As you've said, it may be able to imitate a call or have a similar call, but it is still a completely different species, with a different body size etc.
We're however in a very comfortable position to just sit there, wait and see what others find out. So let's just do that, see what happens, and in the meantime: go check out some Blue Jays!

This is very fine web site, thank you and look at that [url=http;//ciufcia.pl]gry dla dzieci[/url]

Great post, I am almost 100% in agreement with you

Good day! I could have sworn I've been to this website before but after checking through some of the post I realized it's
new to me. Anyhow, I'm definitely glad I found it and I'll
be bookmarking and checking back often!

Feel free to surf to my blog post :: diets that work

I am not sure where you're getting your information, but good topic. I needs to spend some time learning much more or understanding more. Thanks for magnificent information I was looking for this info for my mission.

Feel free to surf to my weblog: http://demosalessite.org/moodle//user/view.php?id=13853&course=1

Check out my web blog: エアジョーダン

Wonderful work! That is the type of info that are supposed to be shared across the net.
Shame on Google for now not positioning this submit higher!

Come on over and talk over with my site . Thank you =)

Here is my webpage :: air jordan

Feel free to surf to my web blog - ミュウミュウ店舗

Ahaa, its pleasant discussion on the topic of this paragraph here at this weblog,
I have read all that, so now me also commenting at this place.

Fabulous, what a blog it is! This website presents useful data
to us, keep it up.

It's very straightforward to find out any topic on net as compared to textbooks, as I found this paragraph at this site.

Asking questions are really nice thing if you are not understanding anything totally, however this
article gives nice understanding yet.

Take a look at my web-site: ロレックス腕時計

Excellent items from you, man. I've bear in mind your stuff prior to and you are just too fantastic. I actually like what you've bought right here,
really like what you are stating and the best way wherein
you assert it. You are making it enjoyable and you continue to care for to
stay it smart. I can't wait to read far more from you. This is actually a wonderful website.

You're so cool! I do not think I've truly read through a single thing
like that before. So good to find someone with some original thoughts on this issue.
Seriously.. many thanks for starting this up. This web site is one thing that is required on the internet, someone with a bit of originality!

Feel free to surf to my webpage: アバクロンビーフィッチメンズ

For most up-to-date information you have to visit the web and on internet I found
this web site as a finest web page for most recent updates.

Magnificent beat ! I would like to apprentice at the same time as you amend your web site, how can i subscribe for a blog
web site? The account aided me a applicable deal.
I were tiny bit familiar of this your broadcast offered bright transparent concept

Look at my web site; レイバン

I got this site from my pal who shared with me on
the topic of this website and now this time I am browsing this
site and reading very informative articles or reviews at
this time.

Hi, all the time i used to check weblog posts here early in the daylight, as i like to learn more and more.


Feel free to surf to my blog post; エアジョーダン通販

What's up colleagues, its impressive post about educationand fully explained, keep it up all the time.

Here is my page - oakley メガネ

My brother suggested I might like this web site. He was once totally right.
This put up actually made my day. You can not consider just how so much time I had spent for this info!
Thank you!

Highly descriptive article, I enjoyed that bit. Will there be a part
2?

Look into my web site - グッチバッグ