It's been quite a weekend: on Friday night, all of a sudden the heating system in our flat broke down. This is bad news in a season when a birder doesn't only feel every White-throated Sparrow could be a McKay's Bunting but actually fears turning into one himself the moment he gets out of his cosy bed. And with this thing happening on Friday night, there was no way it could be fixed immediately, oh no, not over the weekend, only on Monday. So on Saturday we went to get some small portable heating systems and the security guy down at the entrance of our high rise building mentioned that we may want to consider pasting some special plastic foil to our windows to avoid losing heat through these 1960ies windows with metal frames and only one single window pane.
To be honest, putting plastic up on the window was something I thought only existed in the slums of Sao Paulo but with ice forming over night on the inside of our window over the weekend, Monday saw us getting a special "extra large window insulation kit" and I spent half of today putting the plastic up. OK, the windows are turned into "double pane" windows now and the heating got fixed.
All is fine again, yepp, and the bloggin's back.
Needless to say, I didn't get to go birding at all recently and since Monday night it is relatively mild again (aaargh!) and raining cats and dogs. I'd opt for a rain shower of Snow Geese and Gray Jays instead, but unfortunately I am not the one who's being asked here.

Anyway, I still think I owe my one or two faithful readers a few nice bird pics and have therefore asked a friend of mine from Germany if he'd mind me putting up some of his. I think they're great and he's great too because he didn't mind.
So here's the story to accompany the following pictures:

The German Baltic Sea coast comprises a whole chain of so called "Bodden" which are very shallow and often huge bays. These harbour a tremendous variety and number of waterbirds mostly during the migration periods or in winter and at the right time of year it is more difficult to go birding along the coast and not see at least 100.000 waterbirds than to go out and see that many or even more. The largest concentrations are of geese in autumn (I'll get to that in a later post) and of diving ducks and mergansers from autumn all the way to spring. In severe winters these Bodden freeze over forcing many waterbirds to move on south. However, there are always a few spots of open water that remain and are a refuge for all the waterbirds that somehow failed to catch the last breeze south. It is not unusual then to see 10.000 Common Mergansers with a few thousand Smew and Red-breasted Mergansers in one tight flock, sometimes so concentrated that you can't see the water anymore. And when there's a tight flock of waterfowl, there will be White-tailed Eagles near by, no doubt. Very often, the eagles (up to 60) can be seen perched on the surrounding ice and as soon as one of them decides it is time to eat, the whole waterbird assembly just explodes into a huge cloud of whizzing bird bodies, an incredible experience!

The following pictures of a White-tailed Eagle hunt (on Mallards with a few Mute Swans watching) were taken by Rainer Bendt and the copyright remains with him. If you have any other plans with these pictures but to look at them on this site, ask or else get in trouble! 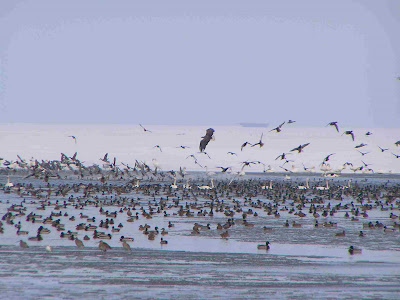 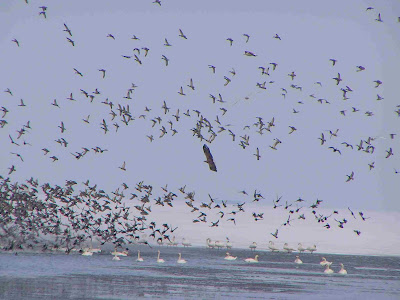 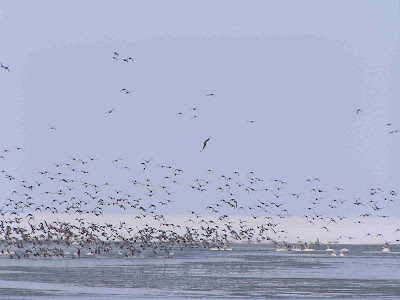 Here's a cropped version of the first image. The Eagle is an adult (white tail) bird and probably a female (more rounded wings, relatively large bill etc.). And have you noticed the Curlews on the first picture? 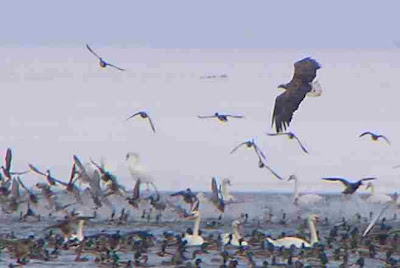 Incredible birds... No matter how many you have seen, each and every observation is a memory.
Thanks, Rainer!
Posted by Jochen at 23:36