It seems the full force of this year's winter has subsided and we are currently experiencing the big thaw. I am sure winter will be back with a vengeance at least once before May but for now Nature's traffic lights are obviously on "green" and the squirrels have regained control over much of downtown Ann Arbor. They are still a bit grumpy though... 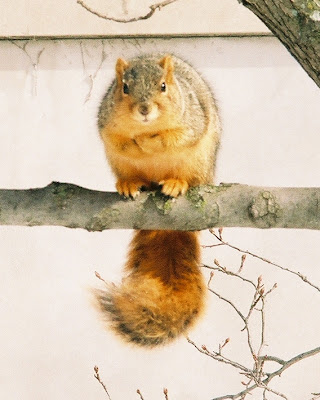 Looking back, I didn't even get half the winter birding done that I had intended to, like documenting the three to four Snowy Owls that I just felt were hanging 'round Ann Arbor airport, but there you have it: things we miss to make a living.
I was however very anxious about getting down to the Huron as long as there was some ice left on the river as the local birders email forum was swarming with reports of ducks from there. There weren't big numbers being reported but a nice variety and if you have only ever seen Mallards and Canada Geese at the Arb's section of the Huron, you just can't picture a scene there that incorporates close to 10 species of waterfowl. Oh, I just had to go and see it myself before the ice would vanish and the birds would scatter again!
So last Monday I decided to take a few hours off work over lunch - I knew I'd pay for that dearly later but what the hay, you only live once - and went down to the Huron.

And [insert swear word at will] it was great and much, much needed!

This is a look at the Huron river at the Hospital's entrance of the Arb. 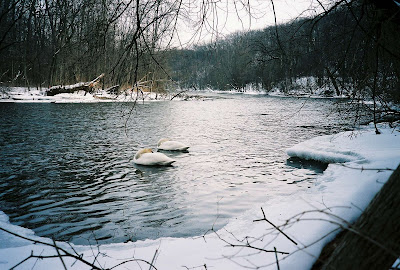 And really, there they were: my first waterbirds of the day!
"Mute Swans" one might be inclined to cry out in anger (being in North America), but upon closer inspection, the tails aren't pointed enough and hurrah, these are actually a pair of Trumpeter Swans. 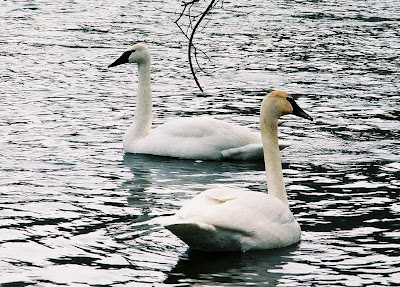 The surroundings of Ann Arbor are home to a small number of these magnificent birds and even though they are half-feral (it may look as if I flushed them to get this picture but believe me, they soon resumed sleeping again with me still being there) they are a joy to watch and listen to. The Trumpet of the North!
Other waterbirds seen on this section of the river included a Common Merganser, plenty of Mallards and Canada Geese (apparently of the form interior), a good handful of Goldeneyes, 2 male Redheads, a Pied-billed Grebe and the ducks with attitude: three female Buffleheads.
Maybe it was my expert eye, schooled in years of searching for otter ... er ... left-overs or the fact that I'd been reading Poe's Auguste Dupin stories over and over again, whatever it was that had sharpened my senses of perception: I tell you when I saw those Canadas on the ice, I knew immediately that they'd either been eating a lot recently or been there before. 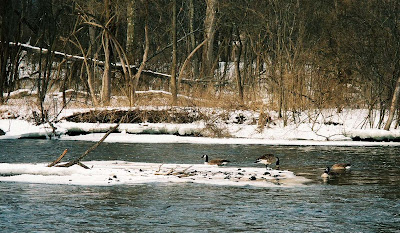 This is the "Beach" section of the Arb. 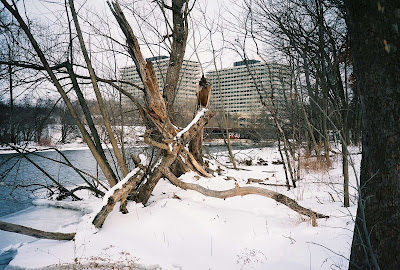 With a bit of good will and fantasy you can picture this (above) to be a dramatic cliff somewhere in the Rockies and start checking the banks for Dippers, or you can turn around, works just about as well: 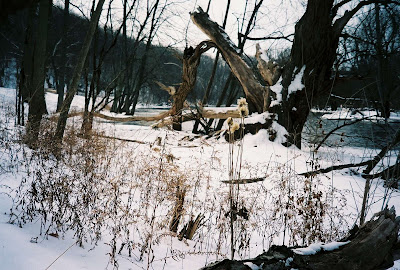 A Mallard walked up to me expecting to be fed which I didn't do despite snapping a picture of it. I know I should feel ashamed but here's the pic anyway: 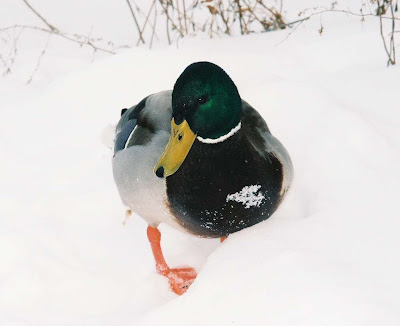 Mind you, it does look disappointed.

Just after the "Twin Peaks" on the Huron was probably the most exciting assembly of waterfowl. It was just plain great to finally get to see:
15 Goldeneyes
1 male Canvasback
6 male Redheads
1 Pied-billed Grebe
2 American Coot
25 Canada Geese
20 Mallards
1 male American Black Duck
4 Mute Swans and
8 more Trumpeter Swans
with 4 Buffleheads and a Common Merganser flying over.

The Trumpeter Swans, obviously aware of their power of voice, had decided it was about time to tell the world spring was nigh! It is surely one of the better moments in life when you get to sit at a river bank and watch 8 (later 10) Trumpeter Swans repeatedly calling out, chasing each other or - if no Trumpeter was close - the Mute Swans and shaking their wings in full courtship rituals!
Here are a few lousy pics of the scene I watched for about half an hour: 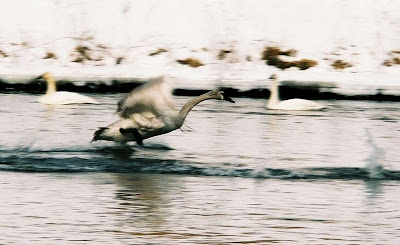 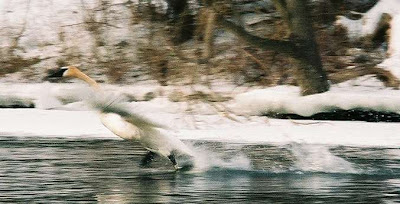 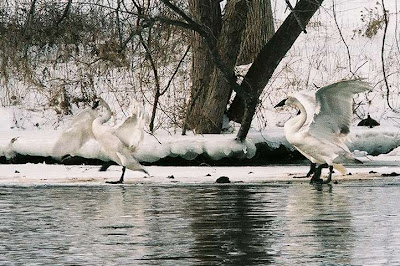 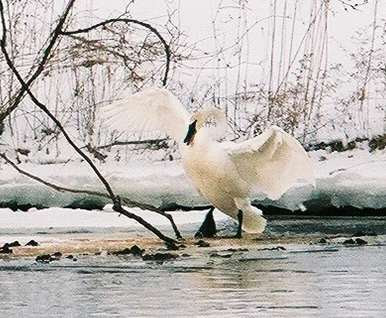 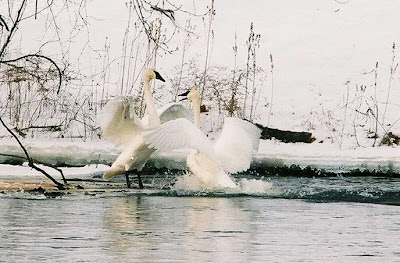 Even though the Huron downstream from the Arb was frozen, I continued along the river and enjoyed the great variety of non-waterfowls I encountered. A Hairy Woodpecker was probably the pick of the day regarding scarcity, but the singing Tufted Titmice, a Carolina Wren working its way up the rough bark of an old Willow, the Mourning Doves that flushed from the shrubbery like a flock of Sharp-tailed Grouse and the White-breasted Nuthatches that were chasing each other were just about as good to see again after such a long absence. Amongst the many American Robins ... 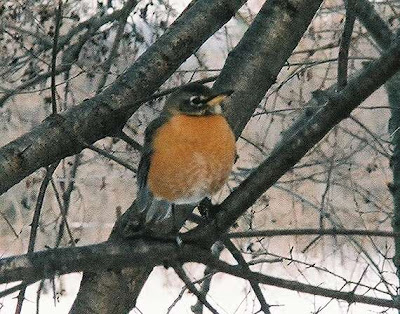 ... were a few Cedar Waxwings, Dark-eyed Juncos, tree American Three Sparrows (ha) and Northern Cardinals were everywhere. I tried to get a photo but they somehow never allowed me to approach them enough to get a decent pic with my point-and-shoot.
This is the best I managed. 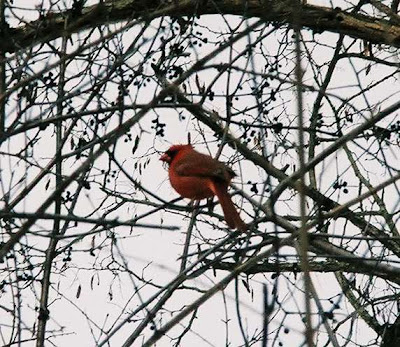 What a devastatingly lousy picture.

But these flashes of ruby red were such a dominant treat of the landscape that I decided I must convey their brilliance to the readers of my blog. Then finally I found something red that wouldn't fly away and went straight for it. It isn't quite the same beautiful shade of red as you see on a Cardinal, but at least now you'll know what I am writing about: 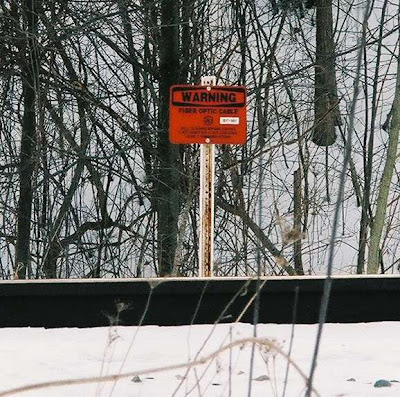 Only a Northern Cardinal can surpass the beauty of a Red Sign in a Bush with Snow...

And beauty was yet again the main theme of the day out. A long time ago, in the early days of bird blogging, I wrote about my most wonderful bird encounters. Well, I added another scene to this on Monday upon my return home through the Arb.
On the banks of the Huron I came to meet a group of 8 Eastern Bluebirds. I have also mentioned before how fond I am of them and really, I find them more and more wonderful each time I see them. But when a group of three of them took off to join a few Cedar Waxwings on a small branch to eat black berries, it was almost too much for this heart of mine to bear.

It was so good to be back amongst the birds again!
Posted by Jochen at 15:12

If you have another chance to get there again, there is some fresh open water, due to the melting, downstream from the railroad bridge, lots of duck there, including several canevasbacks, goldeneyes, coots, redheads mergansers

AAAAAARGH!
Tell my lovely employer about it! I am officially working roughly 100 hours per month but my next month's work assignments (studies I have to write) are estimated at taking around 400.
If there's another "Bigfoot" sighting in the Rockies far far away in the middle of nowhere soon, chances are good that'll be me.