Scanning through my bird picture archive from the Baltic coast, I today found a picture I had taken exactly one year ago but never really analyse and which upon closer inspection nearly knocked me off my chair, realizing what I had unknowingly captured on film:

The World's First Ever Record of a Melanistic Yellow-billed Loon!

The consequences of this finding for the way humanity sees the world or at least part of humanity see birds and birding are immense and in the course of a few years, even Darwin, Einstein and Poe will be forgotten by history over this new discovery.

Only my extensive experience allowed me to recognize the bird on the picture below for what it really is! You can plainly see the typical shape of a diver or loon of the genus Gavia, cigar-shaped, with a long neck and bill and with feet at the rear of the rump to allow for maximum propulsion underwater. The bill is ivory-coloured with a hint towards yellow, clearly identifying the bird as a Yellow-billed Loon / Diver. What is so peculiar however is the almost complete lack of white or pale colouration on the bird, which can only be explained by it being a melanistic individual. Some traces however remain, particularly around the base of the bill and the breast, and a faint patterning of the back allow us - despite its aberrant colouration - to age it as a juvenile bird. 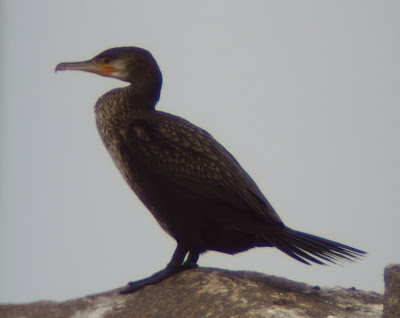 And it proves for the first time, too that divers / loons are actually quite fond of sitting on rocks, another World Novelty courtesy of yours truly,
Bell Tower Birder.
Posted by Jochen at 08:09

Happy April Fools to you, too.

Birding world is cruel for rookies, I have to say

April Fool?
What do you mean, John?

Oh, could it be ... a misidentification?

LOL, almost had me, but then again it isn't april 1st anymore! LOL

Question please. I saw a bird on a mid Michigan lake and wondered if it was a yellow billed loon. Can you take a peek at my blog to see what you think?
58readytotravel.blogspot.com
I have several pictures there.
Thank you!