How to avoid selling your soul for a Bird Species

During Laurent's and my trip to Crane Creek on May 1st (see full report here), something very remarkable happened. So remarkable indeed that it completely changed my way of seeing the world, like turning from looking at something to seeing something, which is quite different.

Let me start where one always aught to... No, not at the Bar, at the beginning:

We all have our Nemesis bird, the one that always gets away because it is so busy showing itself to all the other birdwatchers in the world, and in my case, this is Owls (and rails, too).

I had however discovered a very effective strategy of getting a few owl sightings here in Michigan which was to
a) chase an Owl others have found and posted on the Internet
b) take Laurent with me.

This had led to nice observations of Snowy and Barred Owls but I somehow felt I should at least try and find one species all by myself to see if the curse of the Nemesis bird was still upon me or had finally been lifted. This one special owl species - I had decided - was going to be the Eastern Screech Owl.

There are some questions that would take a whole life of contemplating to answer and some questions we take to our graves, still unanswered, like this one:

Who did I think I was fooling?

Of course I soon realized there was no way I was ever going to find an owl species by myself.
Never.
But there was one question to which I finally found the answer:
Why was I not finding an Eastern Screech Owl?

In the deep and moulding vaults of the secret society called the "Owluminati" I discovered and studied a rare volume about the Eastern Screech Owl and the rituals necessary to conjure a sighting: To view an Eastern Screech Owl, a desperate Birdwatcher was to present the heart of a dearly loved one on the stairs of the Great Pyramid of Tenochtitlan to Quetzalcoatl.

I do like owls. And I do enjoy a sacrifice or two to see a bird. But really, and even though this might disappoint many of my fellow birdwatchers, I was not willing to follow this ritual but had opted for a life without an Eastern Screech Owl instead.

Then came May 1st, and our trip to Crane Creek.
Well, Laurent was with me, so I should have guessed something like this was going to happen, but it was still a complete surprise.

We had birded the whole board walk and were in a bit of a hurry to get to Metzger's Marsh nearby for some shorebirds and waders. While passing two birders, I mentioned that there had been a Northern Waterthrush earlier at this very spot and they thanked us by pointing out that there was a Whip-poor-will perched close to the board walk a bit further on.
That's what I like about birders: knowing when it is time to shut up and enjoy a bird and when to chat and gossip with fellow birders.
So when we reached the next group of birders, we inquired about the Whip-poor-will.
A very friendly lady first tried to explain to us where it was but soon realized that a perched Whip-poor-will was unlikely to be found following a description, so she actually went back a few metres with us and pointed it out.
Now, don't ask me how I managed to mess up the focus on a perched bird, but here is the scene and the bird: 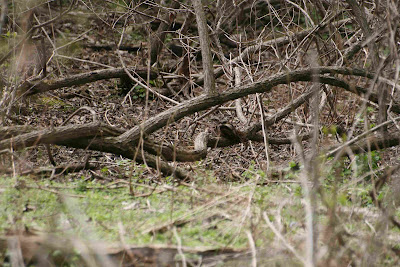 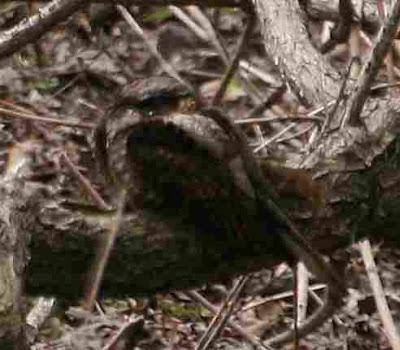 After we had marvelled a good few minutes, the very same lady casually mentioned, and this is a citation of her very words: "And while I am at it: anyone wants to see the Eastern Screech Owl?"

Needless to say, my answer was something along the lines of: "Well, yes, frankly, and if it is not causing you inconveniences, I might find myself inclined to welcome your help in receiving a glimpse of that very species you have just mentioned by closely following your guidance, but please let me assure you that this favour of yours shall only be asked for in case your time schedule will allow further delaying of your other certainly far more important issues."

And this is what we were shown a few metres further down the boardwalk, a tree right besides the path that we had walked by two times:
An Eastern Sigh Owl 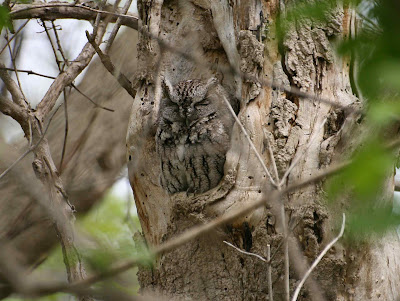 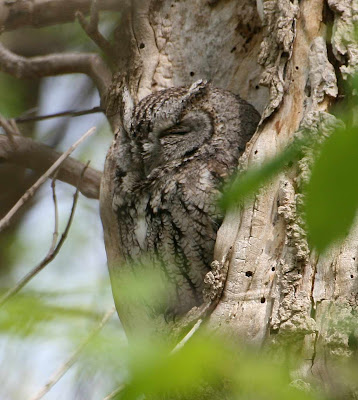 So this was the trick: have someone else sacrifice the life of a loved one to see an Eastern Screech Owl and then just memorize the location where they found it, pass the information on to others and so on.
I am very grateful to the lady for showing us the bird but am not so sure what to think of the guy who first found the owl... Would I want to go owling with him at night alone?
Well whatever, one thing's for sure:

Life's great when you're a birder!
Posted by Jochen at 19:11

Congratulations! And a Whip-poor-will...not a bad day...but what do you have to do to get a Boreal Owl?

Oh, too funny! Congrats on a great day of birding.

Next week, I can show you the great horned owl and its nestling in western ann arbor, and we can, at last, start the ultimate quest

The burrowing owl in Michigan.......I truely believe the should be one somewhere....

Thanks for the trip, and the 26 new lifers for me.

congratulations!-There's been many birds that I've had a hard time finding.-It seems once I've seen it the first time, I usually start to see them more often after that.
I had a c.d given to me by a group named quetzalcoatl-never knew what the name meant-thanks.

OMG, I laughed! Owl are tough. I hear them, but rarely see them. Every single one I have seen, someone else has pointed out to me. And trust me I have looked up the skirts of trees many a time, not to mention peering into every likely cavity and scouting for pellets. I guess I have not been making the right sacrifices.

Very cool birds and find your ways of finding birds very interesting!! When their is something special, I never seen to be able to find it!

Corey: wait, aren't you the guy who claims to have found an Eastern Screech Owl himself? And now you come to me asking about what to do to get a Boreal Owl?
You can't be serious...

Wrenaissance: thanks, glad I was able to share the fun!

Laurent: once we get started, Burrowing Owls in michigan will be taken from the rarity list because we'll find them everywhere!

Larry: funny I thought exactly the same! I am almost willing to bet I'll see them everywhere now. Well, if this turns out to be true, I won't mind too much.

Bevson: it is not that you have not been making the right sacrifices,you've got ideals and morals, that's what sets you apart from those "owl finders" with decreasing families. Very glad you liked it!

Mon@rch: it really IS true, I only get to see owls when I am birding with Laurent. He'll make a fortune one day as a bird guide, I tell you!

Cheers and a happy spring migration!! May the Owls be with you.

Jochen, congrats on some exceptional sightings. Too bad the Owluminati will now have to hunt you down for revealing its secrets! If you think you have a hard time spotting owls, imagine how stealthy members of birding's most secretive society can be. Actually, since Corey claims that he can uncover three different owl species for me, he may be suspect...