Natural selection is a wonderful thing when you're looking at the species as a whole, but it can work rather rough on an individual. It is all fine as long as you are fit, healthy and suited for survival in the current ecological surroundings, but what if you're not?

Does the not-so-fit individual embrace its vital role in the species' evolution?

Wait, let me rephrase that:
Does this young fellow look as if it says: "When I grow up, I want to become a victim of natural selection for the benefit of my species"?

Not really, if I may express my honest opinion here, which I may as it is my blog.

No, the own species' welfare is not something an individual worries about. Within this context, it actually is mostly worried about avoiding natural selection!

A prime example of this is the North American Cedar Waxwing, as I will plainly show with the following images I was able to obtain last weekend at Ann Arbor's Arboretum.

Here you can see a Cedar Waxwing: looking good, looking sharp!
Much sought after by photographers and well aware of it, certainly resembling certain West Coast life forms here. 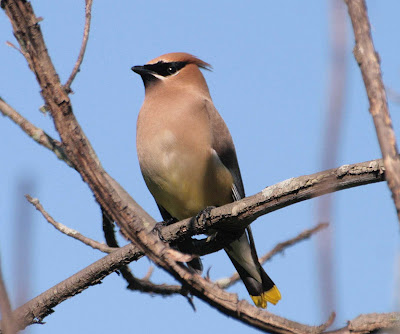 But wait, what is this? Let's zoom in a bit on the bird's head: 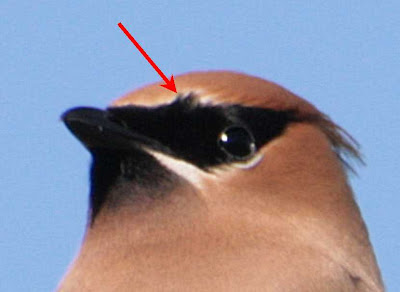 Oh, disgusting, an untrimmed eyebrow!
Oh dear, not only will those bird paparazzi (seen below) descend upon you like flies on a ... chocolate cake, no, it won't help you in finding a mate to reproduce either! 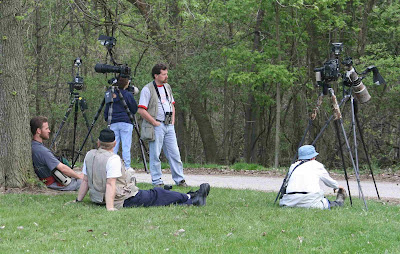 Good thing this lapse is nothing that a good amount of preening can't fix, but ...

How can you make sure natural selection doesn't strike in the form of an Accipiter while you're all busy preening and not on the look-out for these vicious predators?

That's not too difficult if you have a few 100,000 years time, as a matter of fact, and the Cedar Waxwing, as a beauty that is aware of its looks and what it owes to its fans, has mastered it to the fullest:

In the following paragraphs, I will demonstrate the multitude of ways in which the Cedar Waxwing has adapted to the permanent risk of being preyed upon by Accipiters, mostly by a complex array of different forms of mimicry.

Camouflage is always a good way of avoiding to be eaten, but the downside is that it cuts down on your popularity with birdwatchers. So what's fine for a sparrow or a thrush is out of the question for a Waxwing.

Aposematism or Warning Colour
The most easy and usually first responds to a potential predator threat while preening is the use of the bright yellow terminal tail band. Flashing this bright yellow warning colour on an otherwise rather brown bird will immediately remind an attacking Accipiter of a poisonous insect, like a wasp, and make it abort its attack. That's rather smart but then again, there may be some Accipiters that have no idea what a wasp is, so the Waxwing had to develop a second line of defence. 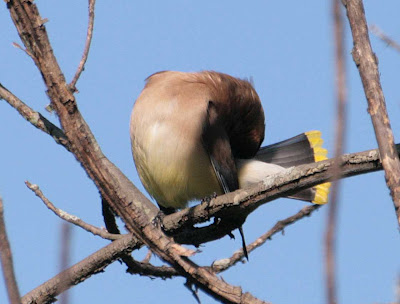 Automimicry
According to Wikipedia: "The mimic [in this case the Waxwing] has some part of its body resembling some other part". Well ,we all know the false eyes on the back of an Owl's head, but what could this form of mimicry be on a Waxwing? Easy: the crest. Ever wondered what it is for? Well, look closely, it may be of another colour but the length and shape are precisely like the bird's bill. And where does the crest point to when the bird is preening? Away from the body towards a potential predator that will subsequently feel watched and not consider an attack worthwhile. 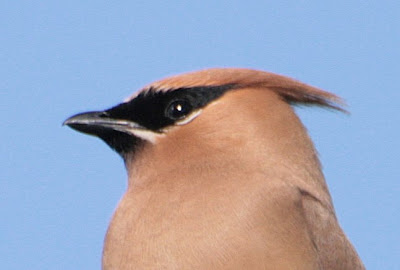 Yes, but then you'll say that this is quite a lousy imitation of a bird's bill and question my hypothesis. But you see, the crest serves two different functions just like the wing of an Auk that is adapted to flight and diving and thus is a compromise between both. The crest also acts as a means to scare Sharp-shinned Hawks off.
Waxwings are just about the upper limit of an ordinary Sharpie's diet spectrum, so in case of a Sharpy attack, the Waxwing just pops up its crest which makes it look much bigger and then faces the attacker. The Sharp-shinned Hawk then has a sudden "Oh darn, big Cooper's meal!" moment and turns off its attack route. 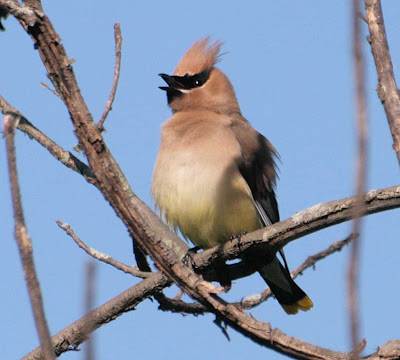 Waxwing displaying its Sharp-shinned Hawk defense
Now, that's rather smart if you ask me. But are there any further means of defense for preening Waxwings that also work on non-Sharpy hawks?

Batesian Mimicry
When preening gets so intense a potential predator won't notice the bill-imitating crest, it is time for the Waxwing to display its most sophisticated defense. By showing off its colouration of wing and tail it gives the impression of a poisonous or at least unpalatable caterpillar, like this one for instance. 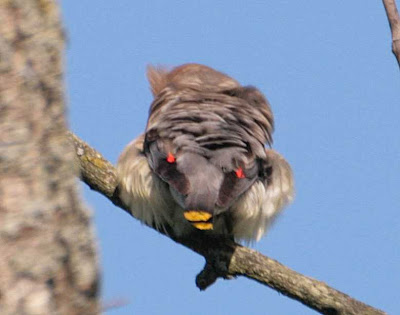 This works on several levels: most Accipiters will suddenly realize they aren't going after avian food after all but an invertebrate larva which they'll surely find quite distasteful. And those Accipiters that accidentally have come to take a liking for the taste of caterpillars will then remember that those with red and yellow markings are not so easy on the stomach and likewise abandon their idea of a fast snack.

As was clearly demonstrated above, the Cedar Waxwing is a master of avoiding natural selection while preening, which has allowed it to develop into such an attractive species.
Others surely strive to follow its example and the next image demonstrates an apparent first step of the Indigo Bunting towards becoming America's next avian Top Model: the tail looks good and it's a start. 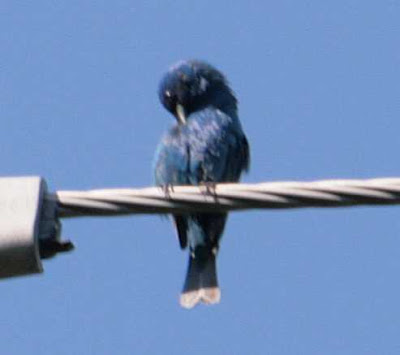 But will natural selection on the buntings be harsh enough to speed this development up?
Well, you might find out in a few years, on yours truly,
Belltower Birding
Posted by Jochen at 14:44

Great waxwings photos! They've always been among my favorite birds.

Thanks, Wren!
I have been tryzing all spring and these two were the first that allowed me to get close enough!
Very exciting species!!
Nice plant shots, by the way, on zour blog.

Bill: Glad you enjoyed it, and it coincides so well with your recent post on "how to do..." what was it "... excellent science".

It was extremely interesting for me to read this post. Thanks for it. I like such topics and anything connected to them. I definitely want to read more soon.

Cool story as for me. I'd like to read something more concerning that topic. The only thing I would like to see on that blog is some photos of some devices.

Pretty nice blog you've got here. Thanks the author for it. I like such topics and everything that is connected to this matter. I definitely want to read more soon.