Cooper's Hawk and the different ways of seeing it

Judging by frequent inquiries on email lists that are accompanied by mystery photographs and by taking a look at what others blog about (e.g. Mike, but I don't know the precise link anymore), the Cooper's Hawk is the most frequently misidentified raptor in the backyards of (Eastern) North America. One of the reasons for this is rather drab and boring and would make for a short post here: it is just about the only raptor that enters backyards in the first place to raid bird feeders or rather the bird flocks gathered around them. Unless you have a good supply of rabbits on your lawn or a small pond full of Apple Snails, there's just no reason for a Red-tailed Hawk or a Snail Kite to even consider paying your garden a visit. Small birds however are everywhere and so - subsequently - are Cooper's Hawks, at least outside their breeding season.
Now however is the point where this introduction leads to nowhere as I now should be presenting ideas and hints on how to identify an Accipiter perched on top of an increasingly unhappy songbird. Well, tough luck, I don't have pictures of perched Cooper's Hawks and all I can do is direct you to Andreas' site to check out his "Hawks and Eagles" gallery. Well worth it!

But one thing may save this post at last: Even in flight, the Cooper's Hawk is a tricky species to identify. Of the three North American Accipiter hawks, its size is right between the Sharp-shinned Hawk on the small extreme and the Goshawk on the large end of the scale. While both "extreme" species are thus more readily recognized by size and general impression alone, the Cooper's can be tricky to identify by these rather subtle characters that are subject to each observer's individual experience and recognition.
Amazingly though - amazingly at least until you get to know the cuttlefish of the sky which is the Cooper's Hawk a bit more intimately - a Cooper's is also not very difficult to misidentify as a female or immature Northern Harrier!

What follows are a few pictures of one and the same Cooper's I obtained on the way to pick up a rental car downtown at the beginning of May, so besides offering a few thoughts on identification, this blog post also demonstrates that a decent birder never, ever leaves the house or even opens a window without their camera at hand. 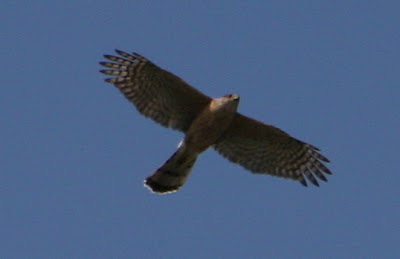 That's what a decent Cooper's is supposed to look like: the tail appears long because it is and because of the narrow base to the wing. The broadest part of each wing is right in the middle between body and wingtip, giving it a very peculiar shape. In a Sharp-shinned, the broadest part of the wing would be much closer to the body than to the wingtip and that makes for a very different general impression. A Goshawk is more similar in wing shape to a Cooper's than to a Sharp-shinned, but the Cooper's hand narrows quite abruptly on the border between the secondaries and the inner primaries whereas it appears to narrow more evenly towards the tip in a Goshawk. The latter difference is rather subtle though. 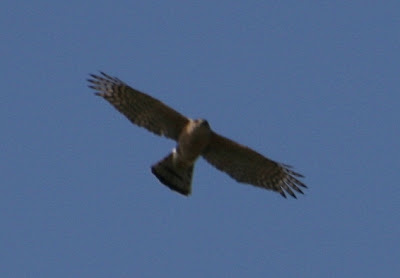 In this head-on view, the Cooper's appears rather massive and is very reminiscent of a Goshawk. The degree to which the primaries show "fingers" would even put a Golden Eagle to shame and contributes a lot to the massive appearance. On a Sharp-shinned Hawk, the "fingers" wouldn't be quite as impressive and I frankly don't recall any of the Goshawks I saw to show "fingers" to such a degree, but that's nothing anyone should count on! 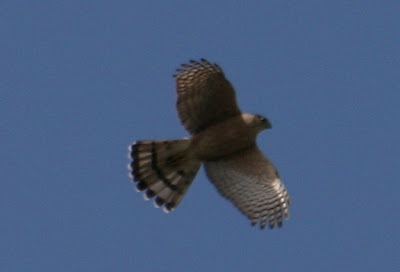 Just a slight turn and a little wing beat and this elegant raptor might appear to be just a fat blob in the sky. Note that the shorter outermost tail feathers - one of the best characters to tell Cooper's from Sharp-shinned - might not be visible easily even when the tail is almost fully spread, being concealed behind the other tail feathers. Cheeky bird!
Of course these strange proportions are only an effect of the bird being "frozen" on this picture in the middle of a downstroke of the wing but if this picture was all we had of - say - a rarity documentation, the wing shape would be quite reminiscent of a Sharp-shinned Hawk. 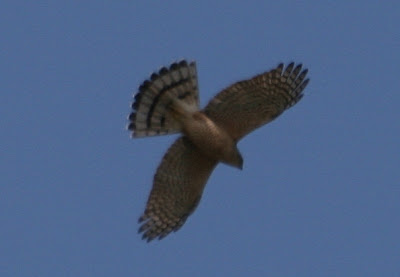 A second later and everything is almost back to normal. But yet again, notice how still Sharp-shinned-like the wing shape is with the wings being pushed forward quite a bit and that this Cooper's outermost tail feathers aren't that obviously shorter than the rest of the tail. Even circling birds therefore must be watched carefully over a prolonged period of time. 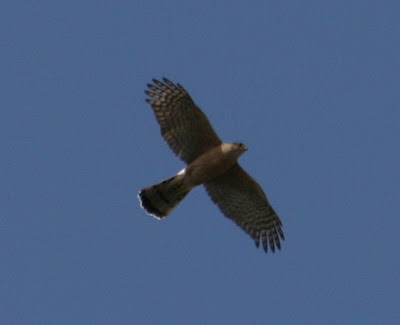 This photo demonstrates why so many Cooper's often get misidentified as a "Ring-tail" Harrier (female/immature Northern Harrier): the white undertail coverts are frequently slightly spread and exposed to the sunlight from above at the base of the tail. The bird therefore appears to clearly show an obvious white rump, the diagnostic feature of a Northern Harrier. If - typically for Accipiter hawks - we only catch a fleeting glimpse of such a bird dashing into the woods, it is easy to see that it doesn't take much effort to call it a Harrier and start discussing how strange it was to see a Harrier hunting for songbirds inside a forest. 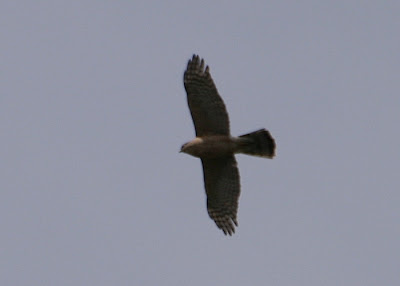 But that apparently white rump is not all: this bird above is again the same Cooper's gliding away from me laterally (against the light, hence the greyish sky), with the primaries bent slightly backwards. Well, that's a pretty good impression of a Harrier and surprising to see a few seconds after obtaining the "fat blob" impression.

What's the message of this post, the thought between the lines?
An Accipiter in North America will always be tough to identify and as this series of photographs shows, it would be very, very difficult to base an identification on shape and size when all you have is a single picture or a very short glimpse of the bird. To use these characters, one ought to best watch it for quite a few seconds or - on a circling bird - a few circles to reconfirm characters like wing shape, rump colouration and the length of the outermost tail feather.

So, my apologies to all those who have expected to learn about an easy solution. All I can offer is a justification for an extremely cautious approach and if ever you very understandably misidentify a Cooper's as a Northern Harrier, you can use this post as an excuse or explanation. Mind you, I might have to use it myself some day!
Posted by Jochen at 17:28

I haven't got these nailed down yet under every situation.-I'm going to go on some hawk watches this year as those guys seem to have a lot of information about flight i.d.

Hawk Watches are great fun, I have spent 2 days last October/November at Lake Erie Metro Park. But boy, those Accipiters sure are a pain in the ... a good challenge. Ever wondered why there's no record of European Sparrowhawk yet from North America?

Give me a second... I need to go back and re-review every Cooper's Hawk sighting I've ever had... j/k... great post!